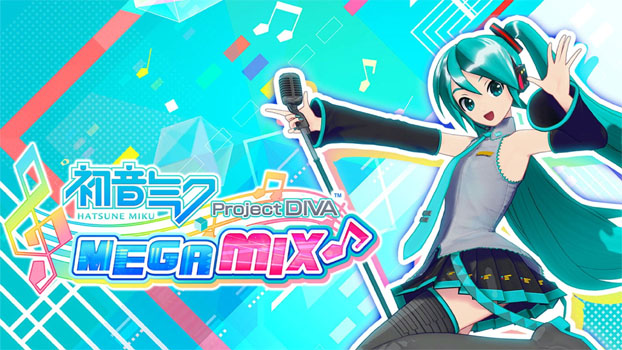 Music is something that everyone can get behind no matter their taste in genre. Having played a wide range of rhythm games myself, including at least one on the Switch at this point, that’s something I firmly believe, although one franchise I’ve never really ventured into is the vocaloid phenomenon franchise known as Hatsune Miku. Well she and her pals make their Nintendo Switch debut with the release of Hatsune Miku: Project DIVA Mega Mix.

I know just enough about Hatsune Miku and vocaloids in general to understand the basics of how it works but that’s about it. While Hatsune Miku herself has been met with wide success she isn’t the only vocaloid out there as first time players of Hatsune Miku: Project DIVA Mega Mix will see. Joining her is Kagamine Rin and Len, Megurine Luka, Kaito, and Meiko all of which are created using samplings from real people to create the singing that you hear as you play. While one might think that Vocaloid music is J-pop at first listen but it’s actually far more than that in scale bridging multiple genres despite the Japanese vocals that you’ll hear within Hatsune Miku: Project DIVA Mega Mix. 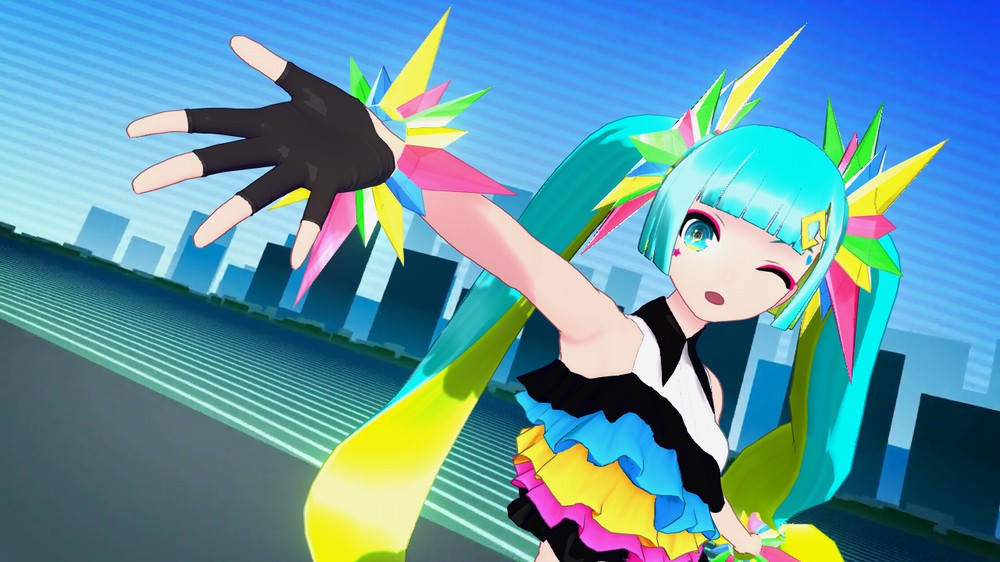 So with the technical background of vocaloids out of the way it’s time to get to the beat of this review. Much like the majority of rhythm games there is no real story to be found here, though there is a bit of reasoning behind the performances you will be playing along to. In their world they are pop icons that seek to grow in popularity and reach new audiences not unlike real musicians.

Marking its 10th anniversary, the Hatsune Miku series has been a departure from what I’ve grown accustomed to in the rhythm genre. While a majority of these titles feature a lane setup like many of Harmonix’s ventures or even MUSYNX already on the Switch, Hatsune Miku breaks that mold with a gameplay mechanic that fits its artist presentations. Instead of a highway down the middle of the screen, the Target Icons (or rather the hit windows) will appear in random patterns on the screen. The Melody Icons, which serve as the notes and even chords, then fly across the screen towards the Target Icon where players must hit and/or hold the corresponding button/s within the time window. The goal is to hit the button right as the rotating arrowed Timing Bar is facing upwards on the Target Icon as the Melody Icon passes over it. Depending on how well you do you are rewarded with a certain amount of VP, the in-game currency, to spend on over 300 modules for your singers. I’ll talk for more on that later. 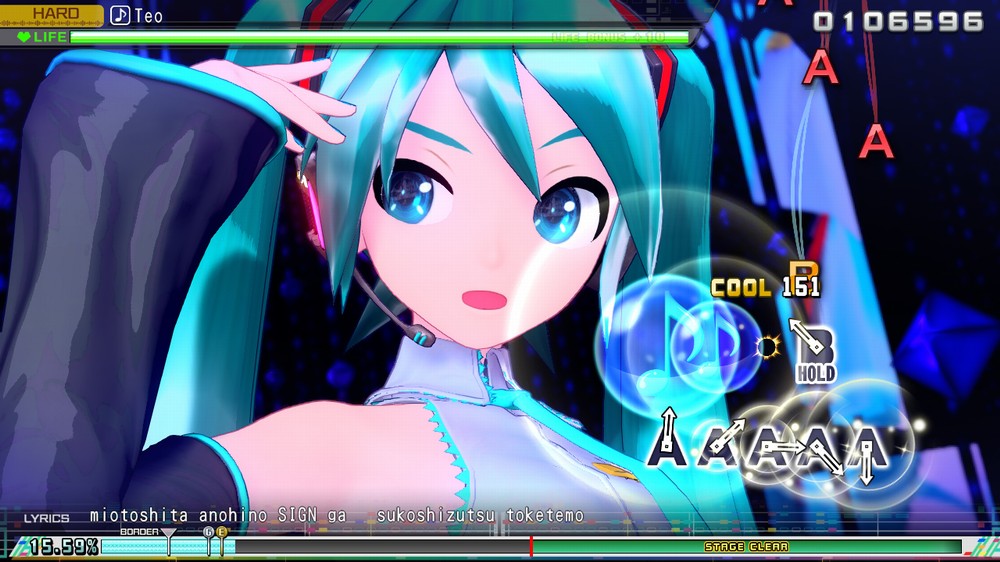 While I’m by no means a master at rhythm games, I found this approach a bit more challenging and a bigger test on hand eye coordination than with any other title. That’s not a bad thing though as I often found myself getting a hang of the mechanics after a while. The problem I faced personally the most was the memorizing the buttons themselves. As this franchise originated on Sony’s portable platform at the time the conversion to Nintendo’s inverted alphabetic face buttons still throws me off at times even after sinking hours into playing. While this boils down to a mindset issue for me there is however a few options to make hitting the melodies easier.

In the default Arcade Mode, you can change the Melody Icons sets to something easier to memorize such as all arrows which may work out well for those that favor the D-pad. Vets of the series will enjoy the option to change the Icon set to that of the Arcade (or PlayStation) button set. You also have the option to hit alternate buttons such as Left on the D-pad in place of Y to balance things out especially if playing in handheld mode. 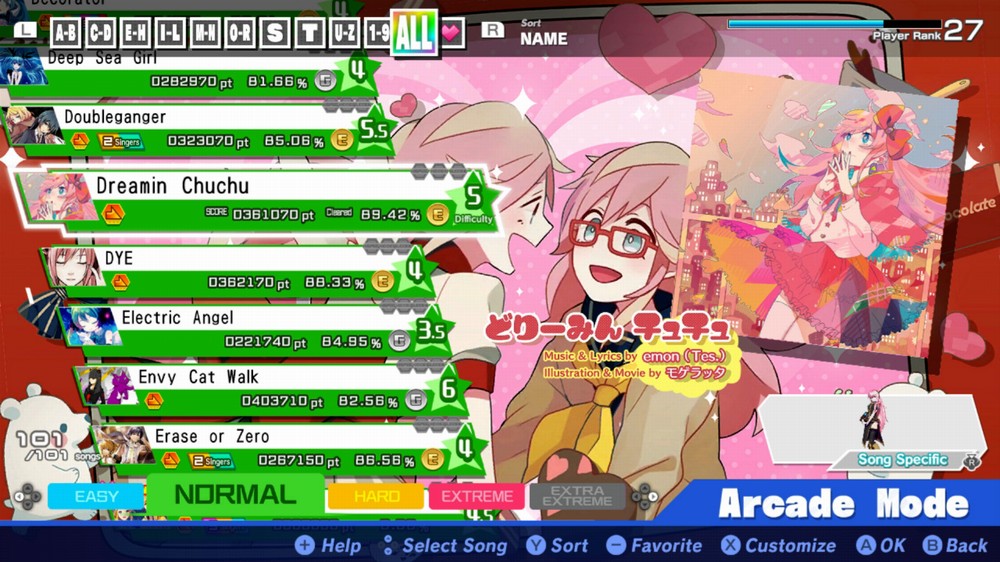 Arcade Mode is but one way to play Hatsune Miku: Project DIVA Mega Mix though as the all new Mix Mode developed exclusively to the Nintendo Switch is introduced. This new control method makes use of the Joy-Cons motion features as you attempt to line up a colorful cursor and hit incoming notes as they overlap. I felt more at home with this new mode as the challenge was more in how fast I hit one of the shoulder buttons, as you hold the Joy-Cons vertically, than memorizing face buttons. You can play this mode in both in Tabletop and TV modes so where you play is not a problem.

One of the features I like most about this mode is that depending on the difficulty of the song you will be using one or both of the Joy-Cons. On easy the cursor is quite a bit bigger allowing for a higher chance to hit the notes as you use only the right Joy-Con. With each increase in difficulty the cursor gets smaller and you step up to using both Joy-Cons. The nice thing for those with less steady hands is that you can adjust the cursor sensitivity as needed to balance things out. There is also a Timing Calibration for both Arcade and Mix Mode if you feel your inputs are a bit off to the beat. 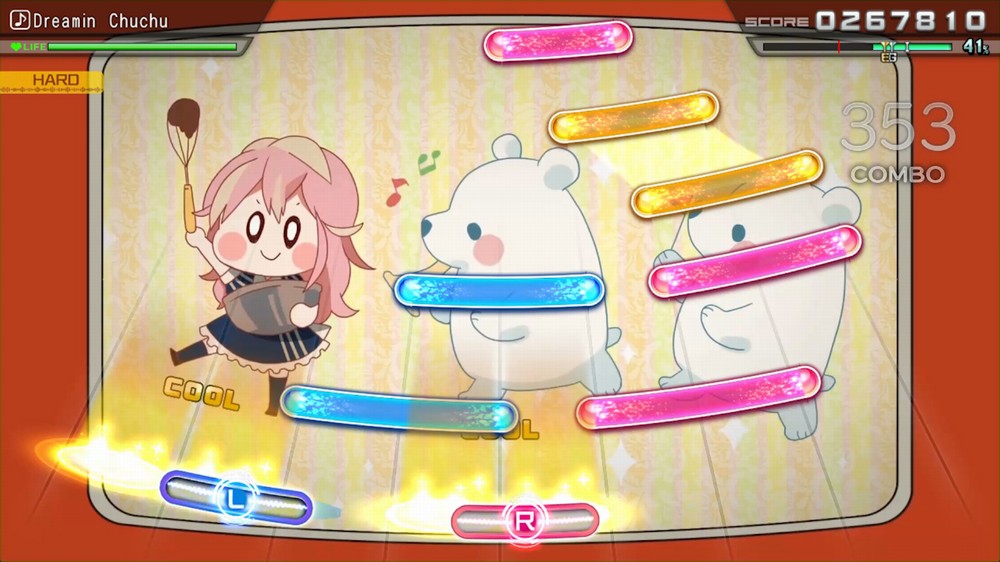 If you own a Nintendo Switch Lite, fear not you are not excluded from getting in on some Project DIVA Mega Mix fun. The downside is that you will need a separate pair of Joy-Cons that you can sync up to your Lite as you play with your Lite propped up against something or on one of the portable stands I’ve seen available. On another front those familiar with mobile rhythm games there is a third input option for you as long as you have the Ver. 1.0.1 update. Tap Play if available is in Arcade mode only as it makes use of the Switch’s touch screen. This mode allows you to hit the corresponding buttons at the bottom of the screen to hit the buttons. Slide Icons however will require short or long flicks on any part of the screen when they are presented.

No matter how you plan to play the bigger appeal for me with Hatsune Miku: Project DIVA Mega Mix is its songs and visual presentation. It’s no secret how popular the titular franchise character is. This computer software program is now an undisputable international popstar even performing holographic concerts. Each of the 101 songs found within is complete with a music video that ranges anywhere from a concert stage like venue to more of a musical story piece as the vocaloid progresses through it. 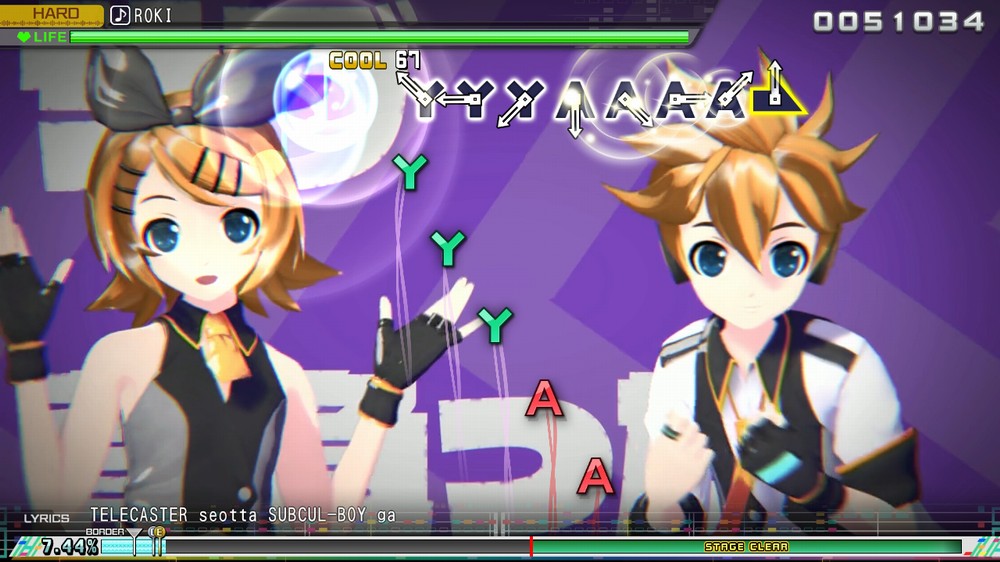 What I really like is that there is a wonderful mix of art style varying from the more recognizable style in songs like “Catch the Wave” to a more anime show style with “Suna no Wakusei”. I really dug “The MMORPG Addict’s Anthem” that incorporated the SEGA game PSO which is one of my all-time favorites. There is even a song featuring the anime Black Rock Shooter which was really cool. The game looks great playing in TV mode and handheld mode alike. When playing on the TV you may notice a bit of fuzziness probably due to some upconverting though not always. Some of that has more to do with the visual effects of the videos themselves. On the opposite of things the smaller fonts are a little harder to read in handheld mode but otherwise the vocaloids look fantastic.

With 101 base songs, some new to this Mega Mix, to choose from there is no shortage of songs to master. The major incentive to getting better is to gain VP to spend on customization options for all your vocaloids. There are 6 different vocaloids that will perform as you play depending on the song. While a large chunk of them are done solo with Miku you can see up to all 6 performing in songs like “DECORATOR”. At first you will play songs with the default modules, or clothing, for each though you will eventually be able to unlock more with VP. This is important as each song actually has a song specific outfit that goes along with it in most cases. In some instances like MMORPG’s Addict you’ll have 2 or more outfits used in the same song which makes the vocaloids fit visually in cue with the song. 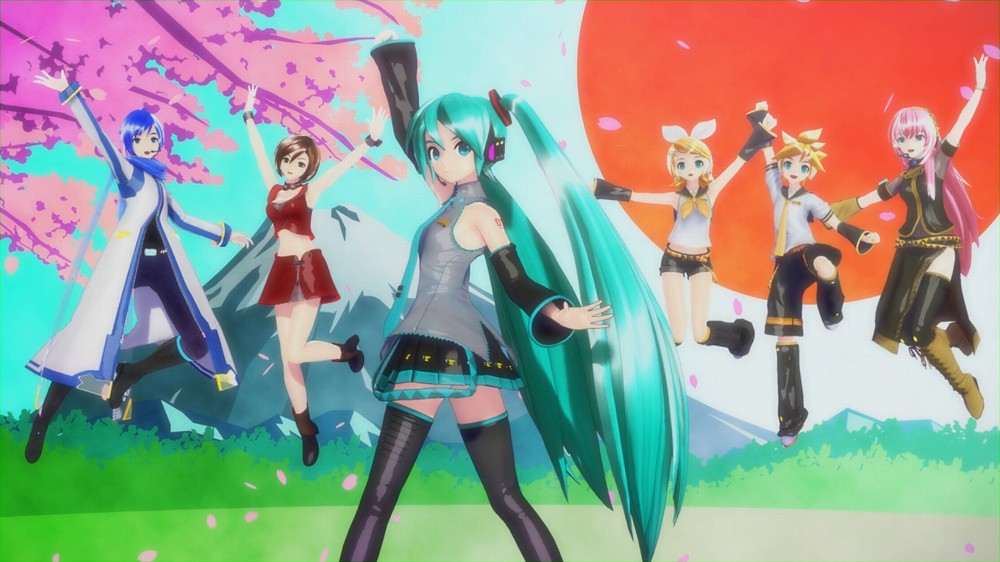 If that wasn’t enough for you, you can try your hand at creating your own modules in the form of T-shirts with the T-Shirt Editor found in the Customization menu. Now I’m not artist, especially digitally, but if you’ve got even a hint of skill then you can design up to 5 different shirts with this tool using the controls or touchscreen. You can create on the front and back of each shirt as well. I imagine using a compatibly stylus of some sort would make things a lot easier as well. If you’re not artistically inclined then you get some free modules via the Nintendo eShop. You’ll also find even more fun via the eShop as there is an additional 36 songs currently available via smaller 6 song packs or as a whole bundle.

As a first time player, I kind of felt overwhelmed at first with the base song selection, before I even knew about the extra DLC ones. Coming in fresh I got to experience what they consider the “best of” songs over the last 10 years which exceeds most base song lists in other rhythm games I’ve played to date. I don’t even want to know how much time I’ve already sunk into Hatsune Miku: Project DIVA Mega Mix as of the time I’ve written this review. The great thing about this game, thanks to being on the Switch, is that I could play it anywhere. Coming from someone that used to sink quite a bit of time into Tap Tap Revenge this is a game I didn’t know I needed in my life. The music selection is awesome and I became instantly hooked with the various visual styles that each video brought to the package. So if you already love Hatsune Miku or are interested in trying a new rhythm game then you have to check out Hatsune Miku: Project DIVA Mega Mix for the Nintendo Switch today.