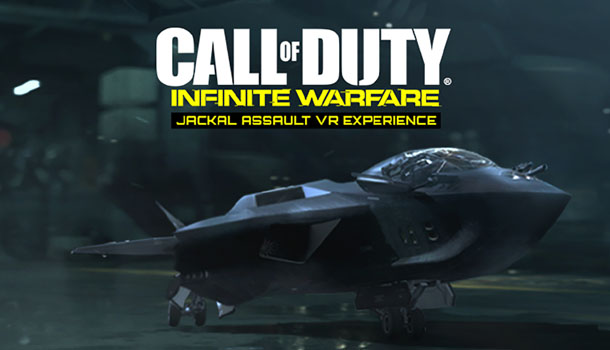 The Call of Duty: Infinite Warfare Jackal Assault VR Experience is a fantastic proof-of-concept demo that will thrill you for the ten minutes that it lasts and leave you wanting more.  Sadly, since the demo unfolds the exact same way every time you play that “more” probably won’t be replaying what you’ve already experienced.  You’ll just want more new content.

For those who have already played Infinite Warfare you are already aware of just how cool the Jackal is as a hybrid fighter craft that can function in space as well as in the atmosphere. Your brief tour of duty in this VR demo will take you from launch tube to credits in less than ten minutes, but it will certainly be the busiest ten minutes of your VR Navy career.

Once you exit the launch tube you’ll have to navigate some virtual windows in space that guide you to a malfunctioning sensor array.   While repairs are underway you get to zap a half-dozen pieces of space debris to clear the immediate area just in time for an enemy carrier to materialize from FTL and unleash a squadron of enemy fighters.   It’s up to you using a combination of lasers and lock-on missiles to eliminate the fleet and attack the carrier.

The PSVR is more than up to the task, especially when playing on the PS4 Pro. The static cockpit is rich in detail and rock-steady framerates helps to alleviate any motion sickness. The controls are flawless with a look-and-lock tracking system for up to three targets at a time and rapid-fire guns for anything that crosses your forward sights. It’s a fun ride, even if it only does last a few minutes, but you’ll have almost as much fun watching all your friends play.

It’s hard to be too critical over a FREE demo, so if you have a PSVR and 1.2 GB to spare then definitely check out this taste of what a full space or air-combat game could achieve in VR. It’s fun, amazing, and an unforgettable experience.