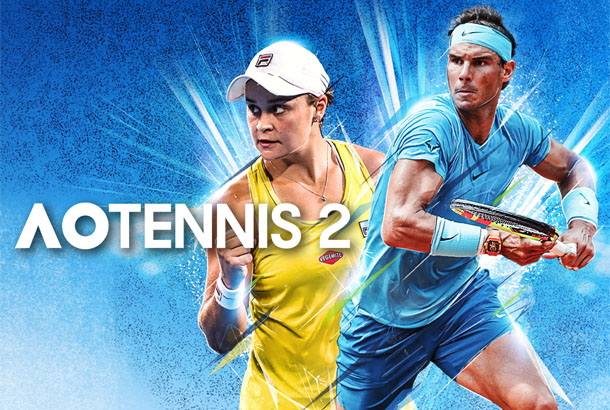 Tennis is a favorite sport in my family. My mom introduced us to the sport when my brothers and I were young. My youngest brother played at the division 1 level and we still meet up Saturday mornings to hit on a regular basis. It is my favorite sport to play and the second favorite sport I like to watch on TV behind football. I have been looking for that same love and passion to come through a tennis video game and have been craving a great tennis game for a long time. The last tennis game I attempted to fill this want was in 2009. While it had a lot of positives, I still wanted more from a tennis game and gave up on there being any good ones going forward and stopped playing them. Well in 2020 I was told about AO Tennis 2. With it being one of the last times that my favorite player to watch, Roger Federer, could be in the game I jumped at the opportunity to grab a copy. Since I had given up on tennis games that I didn’t even know this was a sequel and had to ask once I saw the title.

I was so excited to play AO Tennis 2 on my next gen system. Seeing it was a sequel, I had high hopes that they worked out all the issues from the first game and this was going to be THE game that finally reached my expectations for a tennis game, like Tiger Woods Golf did for the golfing crowd. After starting the game, the open screen already started with the letdown. With any game you want to immediately jump into a quick play session just to play and see how the game plays. I was shocked at how bad the character graphics were for a PS4 game. You see better character designs in PS3 games. The only character that looked somewhat close to next gen was Nick Kyrgios. I quickly gathered myself and said the game is created by a studio that I have never heard of and they could have focused on other areas that can make this game great. I continued with high hopes and then another big hit, WHERE IS ROGER, NOVAK, THIEM, TSITSIPAS, ZVEREV, KEYS, or THE WILLIAMS SISTERS?! Again, after calming down and realizing that getting those players could have been too expensive for the studio and left them out (this isn’t true because you can go and do a quick download and have access to some of them but not all). I picked my second favorite player in Nadal and decided to face off against the top rated American, John Isner. 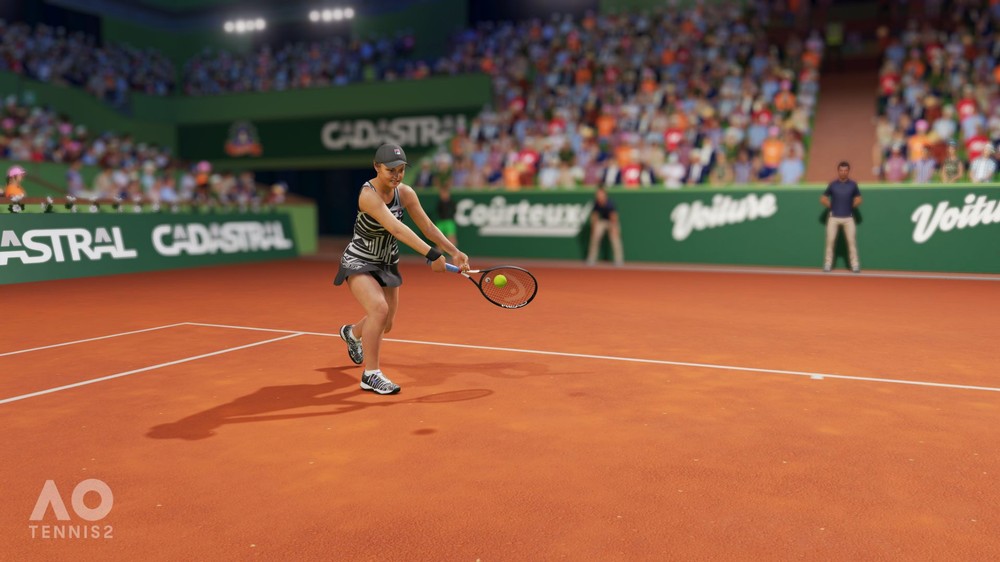 I wanted to test the graphics of this game, so I picked a night time game on clay. I wanted to see how the surface reacted to the players and gameplay. Again, I was let down. I didn’t see any ball marks or foot marks on the court during the play. There was little to no texture at all on the surface, in fact none of the surfaces (or courts) had great texture. With the load times between each screen you would think that you would see every little detail that it would be overwhelming to your eyes.The court was just your basic reddish orange with lines on it. I was just about ready to give up on this game and then I heard it.

The point where the game started to hook me was the sound of the ball hitting the racquet (the loud pop of a flat forehand and the smooth grazing noise of a slice backhand), the Nadal grunt, the sound of the ball makes when it hits the court, and then the crowd reacting to the point. I felt like I was at an actual tennis event with how quiet the crowds were during the play and how the crowd reacted after the point was over. The only thing I think they could have made better were the times when the crowd could have oooohed and ahhhhed and then got quiet again. An example would be in long rally points with shots that look like they will be winners just before it is somehow returned and the point continues to play out. You would hear cheering and shouts of YEAH only to hear shhhhhhh and then it gets quiet again. 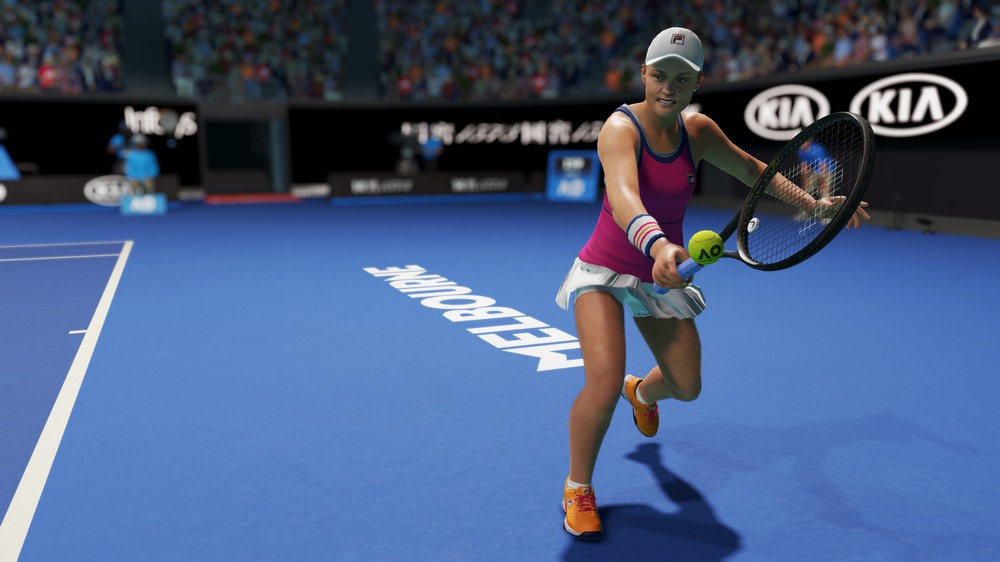 After seeing some positives, I was starting to focus in and then the game lost me. My player just forgot how to swing and contact the ball. The player at times was getting pulled in a different direction for a split second than where I was trying to move the player. Then there were times when I was in position to make a return and then my player would just watch the ball go right by him without even attempting to swing or lunge at the ball to make a play. There were 3 serves in a row from the ad side of the court where Isner served up the T (middle line on the service box) and Nadal just watched it. I finally had to move in the middle of the service return area and tap the button for a half-hearted return but at least it was in play. I have never been so frustrated playing a game that quickly ever. There were times where the landing spot indicator was a foot inside the baseline, and I would have a green marker (good timing and ground stroke) and it would fly out of bounds. What made it worse is I am seeing Isner hit shots without looking at the ball and it hits the lines for a winner. I managed to get through the two sets for the win without breaking a controller or waking up my family while they slept from my frustration screams.

After the quick play I wanted to get into the career mode to see if AO Tennis 2 is worth saving or even playing. I went in and started to create my player. This is where the game really starts to excel. You have multiple breakdowns in each category of the player from head to toe. You can get extremely detailed or just stick with the basics. The only upgrade that could have made this better is to use a camera to take a photo of your face and then generate a player. This same creator simulator translates to arenas as well. You have a budget to consider, but you can build a venue that can be extremely detailed with up to 7 courts (trophy for a 7 court one!!). They can have multiple tiers, you can add a roof, change the colors of the seats and railings, and control every detail even on what the umpires and players sit on. The best part is you get to play any of the courts you created in the gameplay as well. 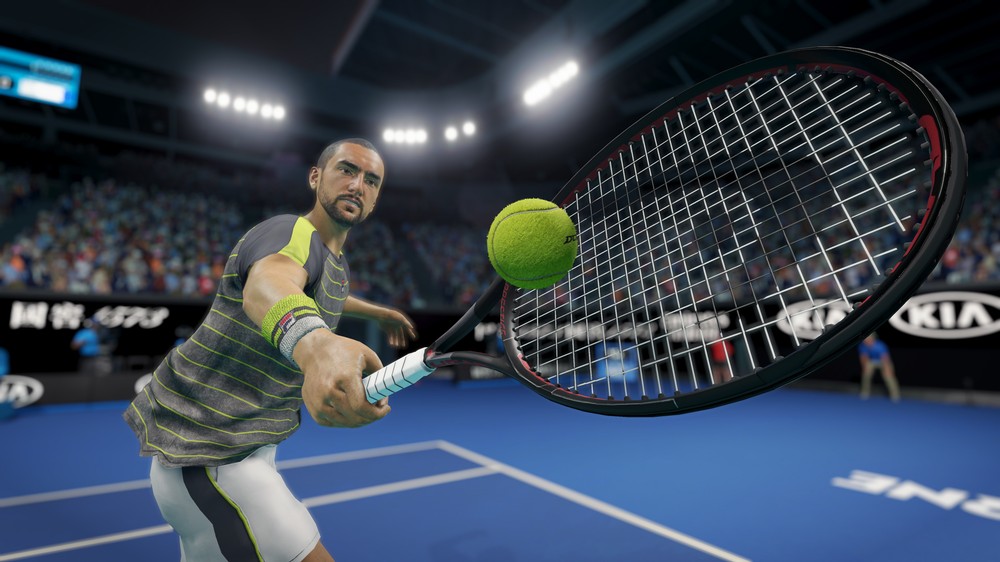 After creating a player, I jumped right into my career. AO Tennis 2 is very good at making you earn your way to the top just like a player in real life must do. You start out with very little money and skills. You have to play challenger and future matches to earn skill and money to continue to grow. At times it is too realistic. You must manage your schedule so you don’t get burned out. You can’t just play tournament after tournament because your player will be too tired during the matches and alter how he/she moves and plays. You can pick between playing a tournament, practice, or rest for that week. The practice sessions are a little frustrating because they are easy to complete and only work on 1 part of your game so getting better really drags on. If you are a true player and like that grind it’s a great thing to have but for the average player who wants to work on things and still have fun against the big name players and be number one in the world taking home Grand Slam Titles, it gets boring.

The last cool thing about AO Tennis 2 is you can create and download scenarios to play. There are so many ones to download. I played in a Hewitt VS Federer one that I downloaded from the popular scenarios folder. I picked Hewitt and I started the match down 5-7, 2-6, and was down 3-5 in the 3rd set. I had to make a crazy comeback to win. It was a lot of fun and had some extra pressure since if I played a bad game right off the bat, I lost the match. The only problem is that you must work to find how to load them. It is not a smooth flow through like a quick play. 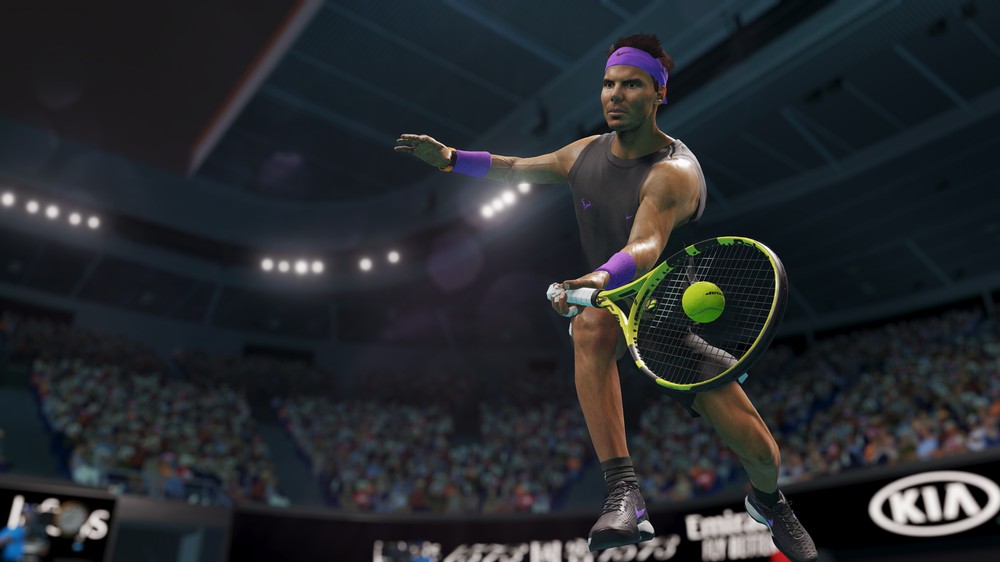 Once again, I am still left wanting for a tennis game that lives up to my expectations for a next gen console game. While AO Tennis 2 has some amazing highs, the lows are just too low to really enjoy this game the entire time you are playing it. When you see other sports games like Madden and FIFA keeping up with the times it just has you scratching your head on why can’t they get a big name (Roger, Nadal, or Novak) to be the face of the game to get some backing to put some money into the game and make it a staple in all sports gamers collections? Depending on what you are looking for in your tennis game this $40 price tag will be worth every penny with the player creations, stadium creation, and the career grind, or the game will be the most frustrating $40 you have ever spent due to the awkward player movement, inadequate graphics for a next gen system, and frustrating gameplay. Here’s to another ten years before I try another tennis game to try and match my passion for the sport. It’s time to dig out my Nintendo Wii to play a little Wii Tennis and work out my frustrations and sorrows.