Check out our quick look out of the box:

I love fighting games, and even though I am far from tournament-worthy there is something about learning all the cool moves and combos and then watching the insane animations in the various fight franchise titles out there. Back in the days of the arcades I would watch in amazement as people pulled off all those cool moves in Mortal Kombat, but I never had the patience or tokens required to master those games myself. Thanks to the proliferation of fighting games across home consoles, that has all changed.

I’ve reviewed plenty of arcade fight sticks in the past ten years, and the one thing I have learned in that time is that playing fighting games with a specialty controller makes your life (and the game) so much easier. I have to admit I was a bit surprised when I learned that Razer was dipping their toes into the fight stick waters. Known more for gaming mice and keyboards, I guess it was only a matter of time before they had to branch out, but at least they took their time and didn’t rush just any old stick out to market. 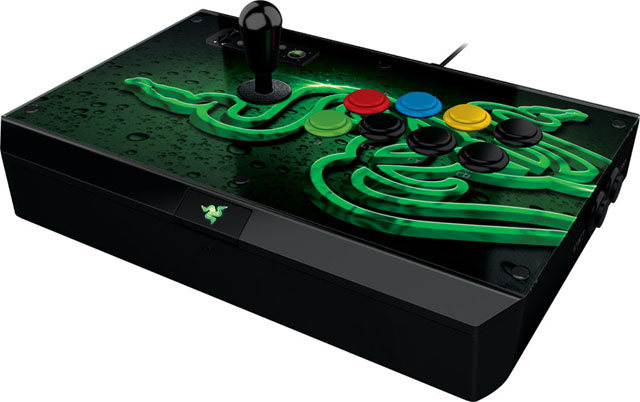 The new Razer Atrox Arcade Stick for the Xbox 360 endured extensive beta testing before the press or gamers even got their hands on it. The results speak for themselves; a tournament-grade fight stick that is ready to stand against and perhaps beat down the competition. On the surface, the Atrox might just look like any other fight stick. The durable shell is composed of high grade ABS plastic with a removable top panel, so you can insert you own custom artwork. It also features a Sanwa Denshi JLF-TP-8YT lever and OBSF-30 and OBSF-24 snap in buttons as well as an 8-button rapid-fire control panel, front-mounted headphone jack, a tournament locking switch, and a detachable 13ft/4m cable with breakaway connector.

The Atrox is surprisingly heavy considering its hollow construction, weighing as much as some of my earlier sticks that were constructed from wood, but there is no denying the durability of this product. The tournament-quality buttons are arranged in the standard Microsoft layout, which may put off StreetFighter fans, but since this stick is not affiliated with that or any other specific title Razer had to go with the default crescent pattern. The Atrox comes with a bat-top grip out of the box and a ball-top replacement is provided for those who prefer the more traditional arcade feel. In an unusual design choice, the Start and Back buttons are found on the right side of the unit, which makes them prone to accidental use, but Razer has included a Tournament Lock switch to prevent that. 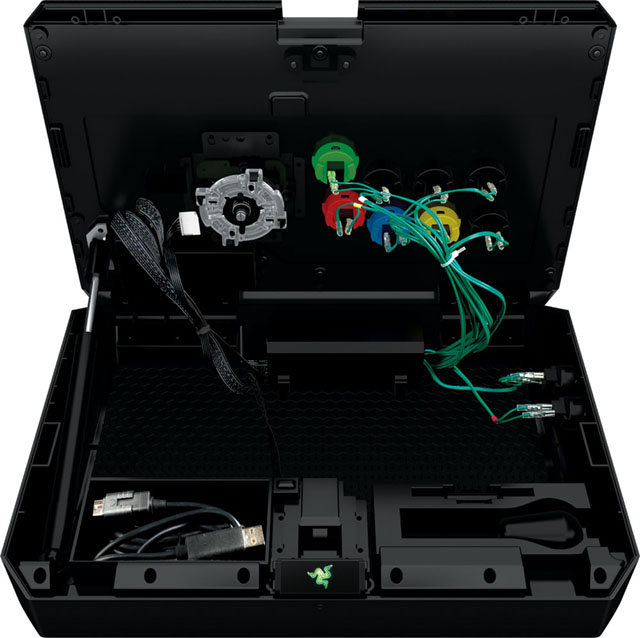 Where the Atrox really stands out is the ability to get inside this device. Just push the front LED-lit button to “pop the hood” for full access to all the wiring and some additional storage space. The lid is supported with a gas strut so you won’t have to prop it up while you tinker. At first it may look like Razer has just given you some extra suitcase storage, but upon closer inspection that honeycomb grid on the bottom is actually a pattern of threaded holes allowing modders to install their own circuit boards to expand upon the base features of the Atrox, and surprisingly enough, Razer encourages this and tinkering will not void your warranty. There is a handy color-coded wiring chart and they even include a dual-purpose screwdriver, perfect for swapping your stick type or removing the top cover to replace the artwork. It’s also worth noting that the top cover is screwed in from the bottom allowing for a completely smooth top surface, and Razer provides a template for making your own skin.

As for performance, the Atrox is in a league of its own with virtually lag-free input. After extensive testing with Injustice: Gods Among Us and Dead or Alive 5: Ultimate, I found the gameplay to be as good if not slightly better than my last two MadCatz sticks. It was certainly more responsive than the standard wireless Xbox 360 gamepad, and thanks to the comfort of not having to grip a controller I was able to play the entire Injustice story in a single marathon session. And yes – it works with Pac-Man Championship Edition DX for those looking for an authentic Pac-Man arcade experience. 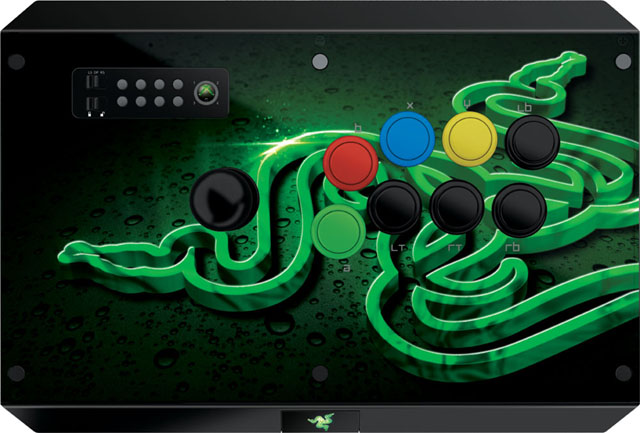 The biggest obstacle with the Razer Atrox is the $199 price tag – about $50 more than competing sticks, which on the surface seems a bit high; especially for a stick locked into just one console. Obviously, there are licensing issues that prevent official products that work on both PlayStation 3 and Xbox 360, and we have no way of knowing if the Atrox will work on the Xbox One when it ships, so depending on how vested you are in fighting games and playing them on your Xbox 360, this could be a tough sell. It’s worth noting that the Atrox will work on a Windows 8 PC, but honestly, there aren’t that many games that would make use of the Atrox, especially at a tournament level.

Even so, the Razer Atrox is a superb, quality arcade stick that, thanks to plenty of pre-release testing by hardcore gamers, arrives in the box as pretty much a flawless product. Solid construction, quality tournament parts, and a unique design that caters to expert gamers and modders put the Atrox at the top of the stack of arcade fight sticks, but unless you are really interested in the modding aspects of the Atrox you can probably settle for a comparable brand that will prove just as durable for a lot less cash.

The Atrox is currently available through Razer’s online store.