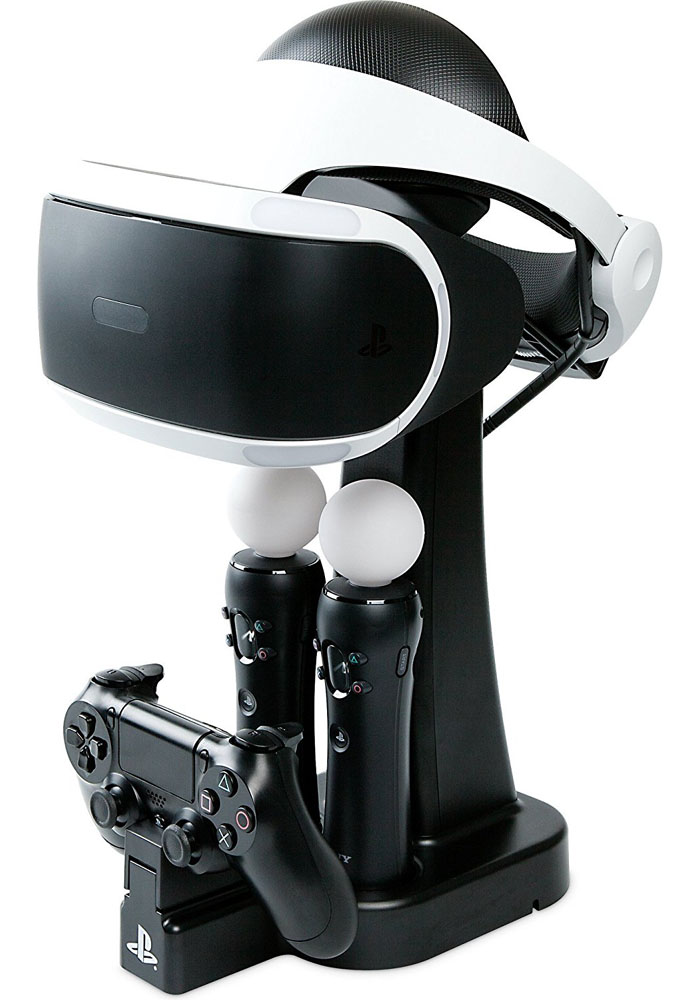 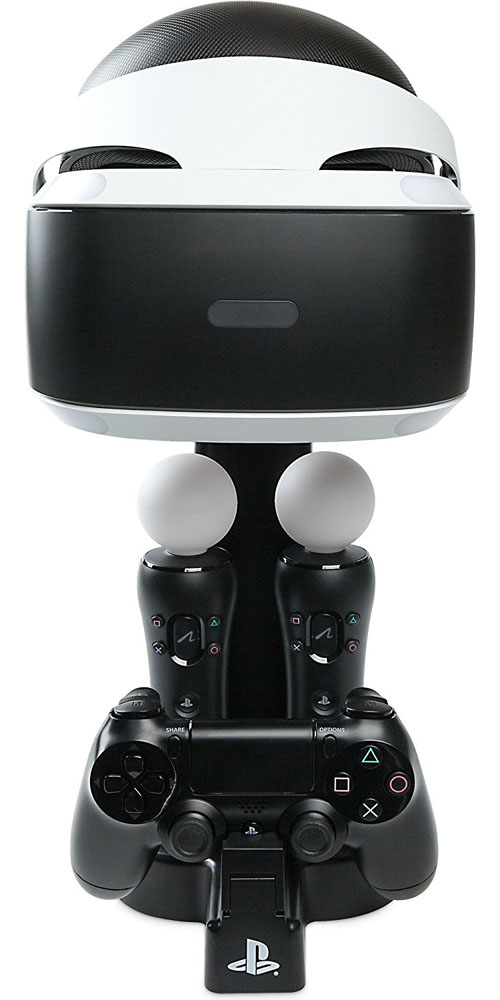 As an avid gamer who owns all the major console systems, a dedicated gaming PC, and more recently, three VR gaming headsets, my game room situation is pretty much a disaster.   Thankfully, PowerA is coming to the rescue for at least part of my problem with their new Charge & Display Station for PlayStation VR; a fantastic idea and a great way to power and protect four devices at once and make sure I am ready to dive into VR whenever I want to escape the messy reality of my game studio.

I was taken off-guard when my review sample arrived in the mail. It felt like the box was empty, but honestly, there isn’t much to this and the construction and design is as simple as the idea behind it. You basically have three major pieces of durable plastic; the base, the vertical stand, and the plastic piece that sits atop the stand that holds the VR headset. All three pieces connect by simply inserting one into the other and twisting a quarter turn to lock them into place. The assembly took less time than opening the box. Plug the stand into an AC outlet using the included adapter and you are ready to charge and display your headset.

There was definitely a peace of mind having my PSVR headset up off the floor and safely stored/displayed between VR gaming sessions on this product. I had already been contemplating getting some mannequin heads to store my Vive and Oculus Rift. Sadly, the design for the Charge & Display Station is totally customized for the unique forehead resting position of the PSVR; otherwise I’d consider getting two more for my other headsets.

Prior to the arrival of the Charge & Display Station I was already having some issues keeping things charged. The PS Move controllers use the old mini-USB from the PS3 era while the rest of the world has moved on to micro-USB. While my PSVR Launch Bundle came with the USB charging cables I quickly found they would not charge the Move controllers using third party AC adapters.   All of my PS4 USB ports were occupied so I decided to charge them using the two available ports on my PS3, not knowing that by merely plugging them in they were also being paired to that console, forcing me to re-pair them with the PS4 the next time I wanted to use them. Ultimately, I had to remove my PlayStation Gold Headset dongle and charge my Move controllers one at a time on the PS4. 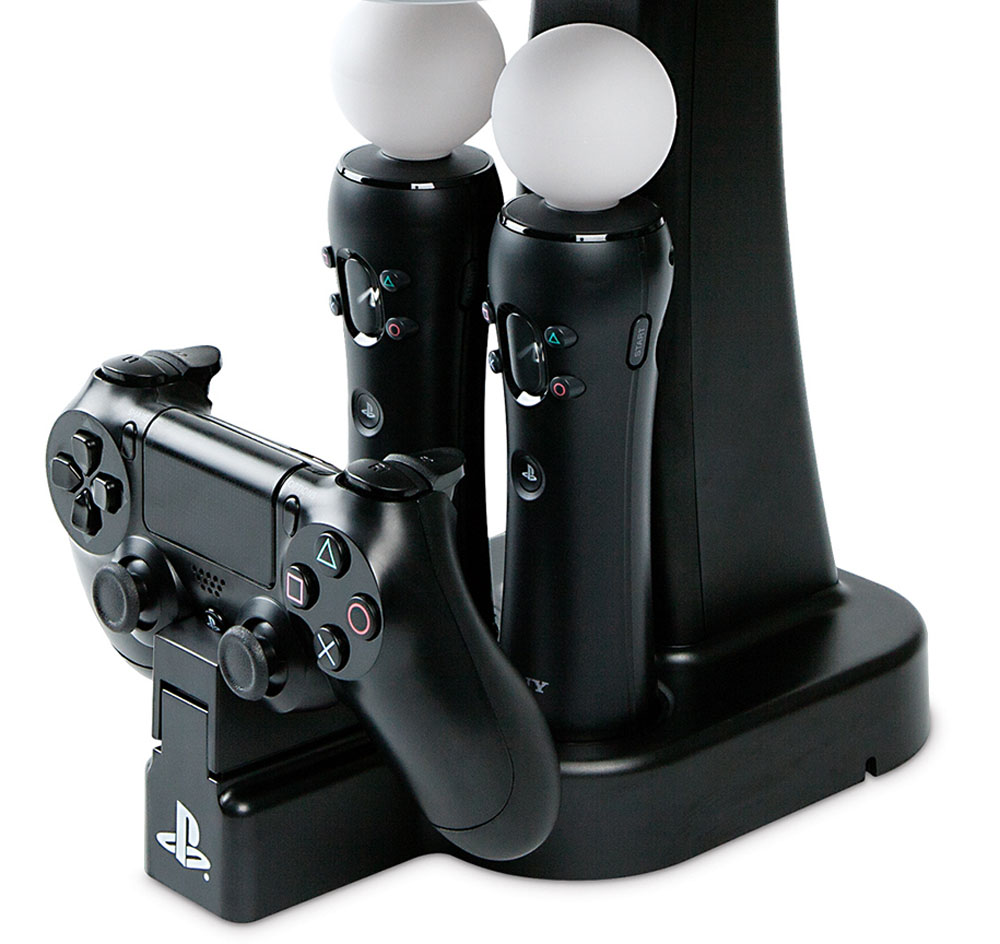 Thankfully, PowerA has resolved this issue. Now I just have to put them in their sockets in the charging base and they’ll be ready to go the next time I want to play. I also appreciated the thoughtfulness of a DualShock 4 charging cradle. I already had a twin cradle to keep two of my four controllers charged, so now I can keep three controllers on standby while I use my fourth.

The Charge & Display Station for PlayStation VR is without a doubt one of the most useful accessories I have owned for any video game system/peripheral to date. It serves two invaluable functions in both keeping my headset out of harm’s way as well as keeping all my VR controllers charged and ready for action. If you already own or plan on getting a PlayStation VR then this is a must-own solution to keep your investment safely charged and ready to play. 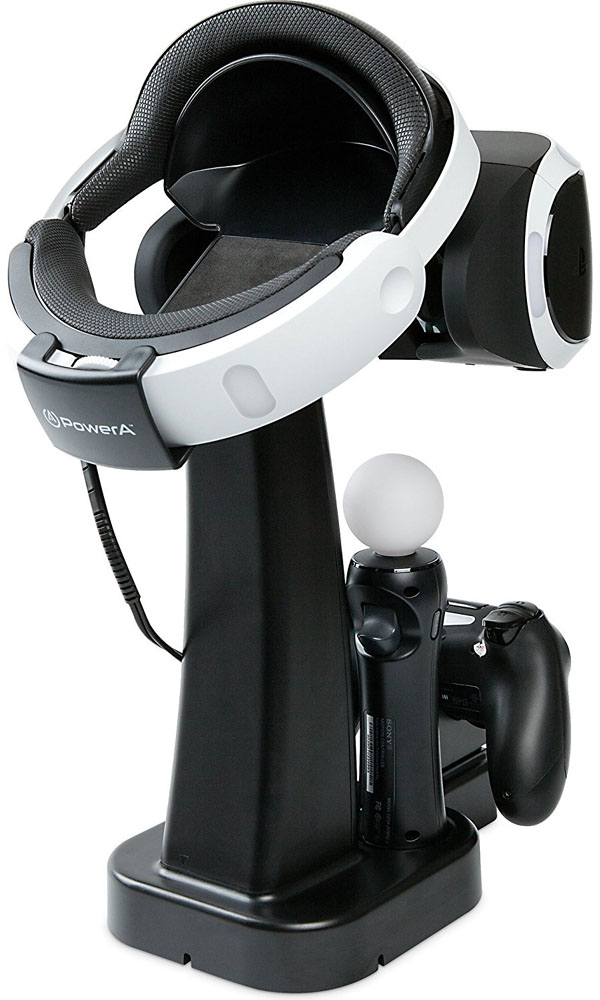