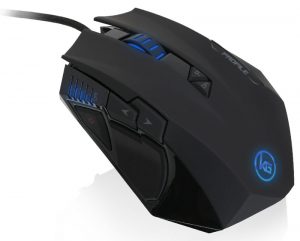 As a gamer that frequently plays PC games having the right equipment is high on my list when it comes to playing at my very best. I’ve used a wide variety of PC peripherals over the years and am always curious about what’s out there. When it comes to PC gaming my interests largely fall into two main categories: Role-Playing Games and First Person Shooters. Anytime these two genres combine in a game it makes it even more enticing for me. The thing about FPS titles is that there is a wide variety of types ranging from your hardcore ventures like ARMA to good old fashioned twitch shooters like DOOM out there. The one thing that they both have in common though is the need for accuracy and precision and that is where the new Kaliber Gaming™ RETIKAL Pro FPS Gaming Mouse by Iogear comes into play.

Iogear has been in the business of creating a wide variety of computer connectivity solutions for years now and I’ve even used more than a few of them myself in that time. The new Kaliber Gaming line of gaming peripherals available today is yet another step towards continuing their goals to making the complicated world of technology just a little bit user-friendly. Unlike most gaming mice that tailor to a wide variety of gaming genres, the newly released RETIKAL Pro FPS Gaming Mouse is specifically designed with first-person shooters in mind. 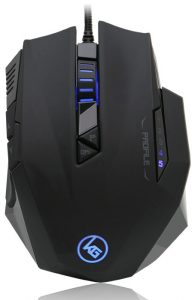 The RETIKAL features the same ABS and polycarbonate body that is featured in all the Kaliber Gaming™ series mice. Once I unboxed the RETIKAL, I was treated to a slick design that looks like it’s made to offer gamers a firm tournament grade mouse. Much like the SYMMETRE, the RETKIAL features the same sharp blue lighting scheme that by default ebbs with the popular “breathing” effect seen in a lot of other gaming peripherals. There is a bit more reinforcement on the RETIKAL with the addition of non-slip rubber grips on the thumb rest and click wheel to provide any gamer a solid hold on their mouse in the heat of battle. The design also features rubber pads to help against slip and a sturdy braided cable measuring 6.5 feet that allowed for plenty of play in cord with little physical drag with my current setup.

The RETIKAL truly is a gamer’s mouse with it obvious and not so obvious features amidst its design. The RETIKAL features a 9 button layout designed to offer players a customizable experience. The real gem and standout feature of the RETIKAL Pro FPS Gaming Mouse is the Precision Sniper Button located on the thumb rest. The thing about FPS titles is that you have to be quick with your movements to stay ahead of your opponents with a high DPI but when tight control is really needed for those precision shots you need to drop that DPI down fast. The built-in Sniper Button does just that holding it down to get that much needed steadiness. 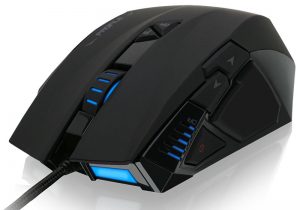 Similar to the SYMMETRE the two buttons under the scroll wheel of the RETIKAL allow players to either quick-switch the DPI between the 5 presets ranging for 800-5000 DPI with one button while the other allows you to switch between one of 5 user created profiles. The interesting thing about the RETIKAL is that there is an additional mouse clicker to the right of the traditional right click. Initially it’s set as a double click but it can be set to other things like a “Multi Fire Button”, which is a really useful as a second rapid fire button.

The second biggest feature that the RETIKAL offers is the tucked away Adjustable Precision Weight System housed in the bottom rear of the mouse. This chamber houses 4 removable 4.1 gram weights that can be added or removed to either increase precision or removed to increase movement speed. I went with a 2 weight option for most of my testing to get an even balance but it really depends on the game on what works best as I found out. 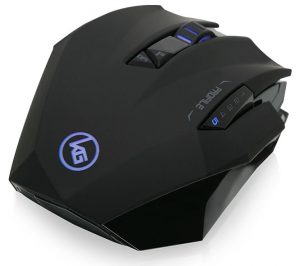 I ran the RETIKAL through the ringer, testing it on everything from twitch shooters like the new DOOM and Minimum to more tactical endeavors like ARMA, Call of Duty and one of my personal favorites F.E.A.R. I have to say that the between the weight system and the Sniper Button the RETIKAL is pretty nice for its $35 price tag. Things are made even better thanks to the customization allowed by the separate Kaliber Gaming software made available from the RETIKAL product page on Iogear’s website. This software allows you to customize and program the RETIKAL pretty much anyway you want.

The biggest thing about the RETIKAL is that without even having to configure it at all it works exactly as promised and quite well I might add. That doesn’t mean that you shouldn’t configure it to your preferences and Iogear has that covered with the downloadable software. The RETIKAL can be used for so much more than pure gaming applications as you can program it to open programs, control multimedia programs and other inputs from a slew of options at the press of a button or two.

At the end of my time with the new Kaliber Gaming™ RETIKAL Pro FPS Gaming Mouse, I have to say that I was impressed with the DPI versatility that it can deliver. Tapping out at 5000 DPI it’s a bit more of the ideal choice for first-person PC gamers out there, but it held up to most of my gaming needs so that area is something wholly up to the individual user. I’ve tried a lot of gaming mice out there but the RETIKAL is the first one that I’ve really seen or used to have with a button dedicated to dropping the DPI for precision like that. This a great mouse for hardcore players or players planning to get into first-person shooters on PC for the first time, so look for it today online or at your local retailer today.