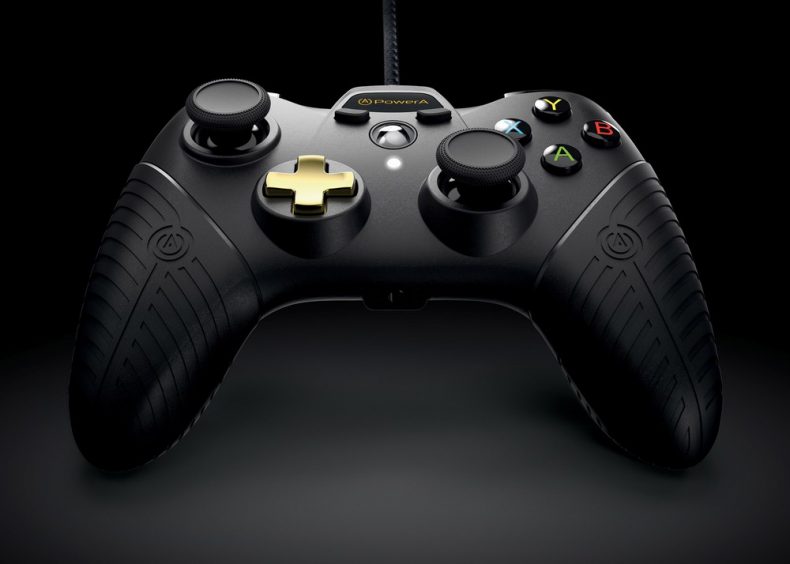 Performs like a gamepad that would cost twice as much. 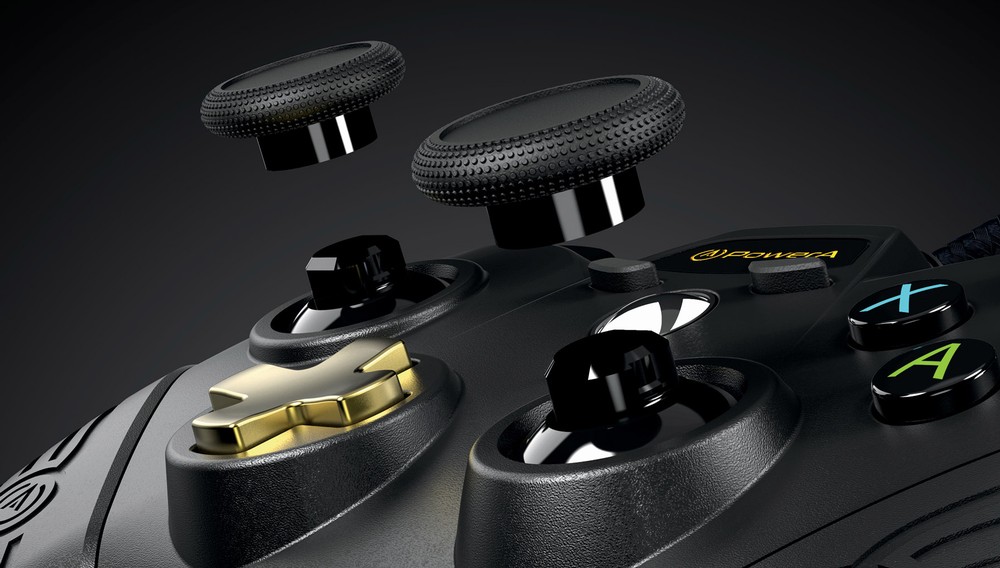 It wasn’t so long ago that Xbox One gamers only had one or two options when it came to a gamepad.  Then came the Elite controller and now we have the S controller, both from Microsoft, not to mention the dozens of other third-party offerings.  PowerA has always been known for high quality and innovative designs and their new Fusion controller definitely fits the bill for a certain gamer niche.

First, let’s address the 9.8ft braided elephant in the room.  Yes, this controller is wired, so if that’s a deal-breaker then thanks for reading this far, but if you don’t mind being tethered to your Xbox One (or PC) and possibly getting some tournament-quality response time from your gamepad and not having to worry about recharging batteries then please continue. 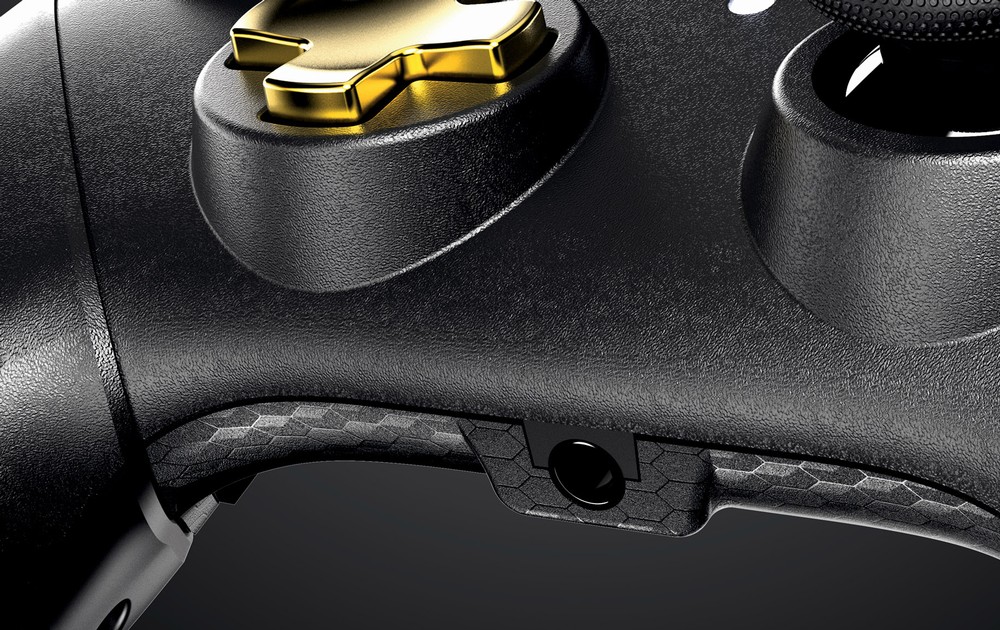 The Fusion Controller comes in a slick black and gold as well as a white and gold design with a gold-plated look that just doesn’t come across in photos.  The level of gold(ness) on the Dual Rumble Impulse Triggers and precision D-pad will have you feeling like a pimped out rapper.  The black and gold is especially appreciated here at our office located deep in Purdue Boiler country.  Having no battery pack, the controller is very light, which gives it a cheap and flimsy feel, but nothing could be further from the truth when it comes to actual performance.

The first thing I noticed was the shoulder buttons.  I’ve hated the shoulder button on every Xbox One controller I’ve used except for the Elite, and surprisingly enough, I’d have to say the Fusion’s shoulder buttons are even better than that.  There is great movement and a definitive click to the LB/RB buttons unlike the mushiness of most all others.   The same can be said for every other button on this controller from the D-Pad to the four main buttons and even the L3 and R3 stick clicks.  The triggers have a great feel with smooth travel and a fantastic springiness to them and the rumble/impulse feedback is second only to the Elite. 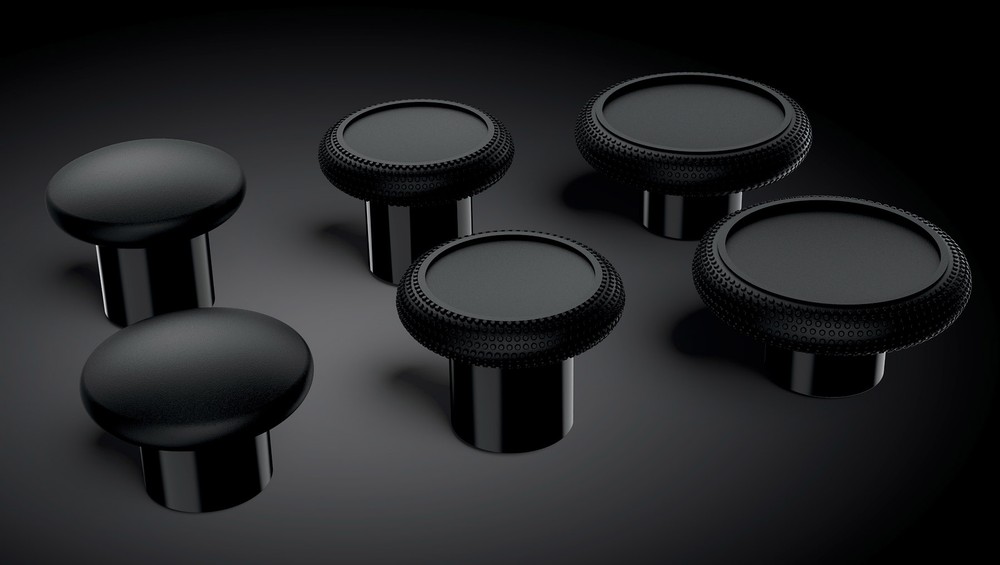 The Fusion attempts to mirror the Elite in a few ways.  First, you have dual Trigger Locks you can toggle on the bottom of the gamepad that will engage a rapid-fire mode that will devastate your opponents.  You can also swap out the sticks with six interchangeable tops to customize height and convex vs concave thumb rests.   The sticks are key-slotted and snap into place, which is functional but not as slick as the magnetic sticks of the Elite.  There are also two Pro Gaming Buttons located just where your third finger naturally rests when gripping the controller.  I found these far more useful and much less intrusive than the paddles on the Elite.  And just like the Elite, the Fusion has a 3.5mm audio jack so it’s ready to be used with most headsets with no chat adapter required.

Certified by Microsoft, the Fusion is ready to go out of the box, and I put it through some rigorous testing in games like Forza Horizon, Rise of the Tomb Raider, Titanfall 2, and even some Zen Pinball, so I could give those shoulder buttons a workout mashing on the flippers.  I then plugged the Fusion into my PC and checked out the new Deus Ex and perhaps the most severe controller test game of them all, Pac-Man Championship Edition 2 where the D-pad proved nearly as responsive as a tournament stick.

I guess my only issues with the Fusion Controller are mostly cosmetic.  The ribbed hard plastic on the grip pods allows for a good grip until your hands start sweating, which they will do since hard plastic doesn’t breathe.  It’s certainly not as comfortable as the grip area on the Fusion Pro controller and it also lacks any of the cool accent lighting effects of the Pro.  The only thing that lights up on this gamepad is the PowerA logo in the top window.  Still, at only $49.99, this is a fraction of the cost of the Microsoft Elite Controller and comes awfully close to matching its features and performance.  If you can get past the wire, the cheap look and feel, and a few cosmetic issues, the PowerA Fusion Controller performs like a gamepad that would cost twice as much.

Details about this review
SystemPC, Xbox One
MSRP $

Xbox One or PC with USB

14 people like this
Game Gear Reviews, PC, Xbox One