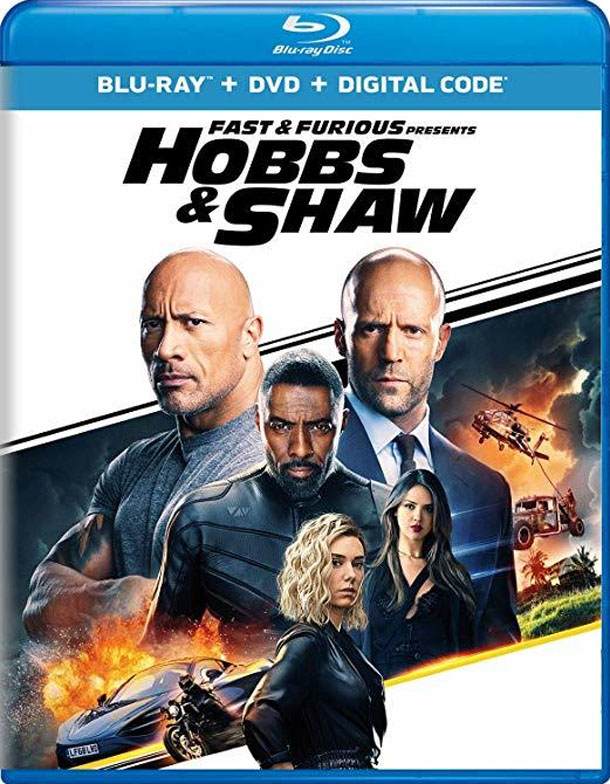 I’m not ashamed to admit that I did not like Fast & Furious Presents: Hobbs & Shaw when I saw it in the theater, but I always hold out that small bit of hope that movies I don’t like in theaters might be better when I watch them a few months later at home. Sadly, that was not the case with Hobbs & Shaw. Everything I disliked about the film the first time; tone, script, humor, was just as juvenile and distasteful at home; perhaps more so now that I didn’t have an audience telling me when I should be laughing.   To make matters worse, the commentary and much of the bonus footage kept focusing on the parts I didn’t like as “their favorite parts of the film”.

I realize humor is subjective and while I tolerated Ryan Reynolds and Kevin Hart adding their own styles of humor into this story I bounced hard off the incessant bickering and sophomoric exchanges between Statham and Johnson. Seeing two grown men going back and forth like 12-yr olds was exhausting, and not just once when they first met but even a second time onboard the plane where these exchanges go on for far too long. I expect better from stars of this caliber.   If you can manage to avoid, skip, or just tolerate these two problematic scenes the rest of Hobbs & Shaw is pretty enjoyable.

Reprising their roles from the past few Fast & Furious movies, Hobbs and Shaw must join forces and team up with Shaw’s sister, Hattie (Vanessa Kirby) who has injected herself with a super-virus capable of destroying the planet, or worse, getting programmed to destroy part of the planet if Black Superman, Brixton Lore (Idris Elba) gets his hands on the virus. We have the obligatory opening virus heist followed by a rather cool split-screen opening montage of Hobbs and Shaw waking up and starting their respective days, both leading up to spectacular fight scenes for each. Once our two heroes are united in London and finish up their first round of insults the real action starts as Brixton pursues Hobbs and Shaw while they try to protect Hattie and get the virus removed before it activates. It’s one major car chase, gun fight, enemy base infiltration, and Samoan family reunion all leading up to the big Fast & Furious finale that defies logic as much as your expectations.

Perhaps the best part of the movie is the villain, Brixton, a former associate of Shaw who was shot in the head and left for dead before his new employers enhanced him with all sorts of cool cybernetics and augmented reality, creating a villain powerful enough to face off against Hobbs and Shaw at the same time. The movie runs a bit long in places – removing those two extended arguments would make it just right – but otherwise the pacing is fairly nonstop with only minor moments of exposition before dropping you into the next spellbinding set piece. The chemistry is all over the place with non-stop hatred between Hobbs and Shaw until that scripted moment near the end where they become “best buds”. There are at least two moments of forced romantic tension between Hattie and Hobbs; once in a truck and once during a Samoan sunset and neither felt right.  I really enjoyed the final battle and the clever way they took guns out of the equation and made the fight more authentic to the Samoan people…at least until the movie spun off the rails for the finale with the helicopter and a string of specialty autos playing tug-of-war.

I typically don’t review non-4K movies but Blu-ray was what we got for this review and I have to say I was impressed with the quality. My 4K Sony player and 4K HDTV all worked to upgrade the image to 4K resolution even if I didn’t get any HDR enhancements. The picture was immaculate with razor-sharp details on both the wide shots and the extreme close-ups. Colors and skin tones were great and there were no artifacts, grain or noise. Contrast was sharp with solid blacks and some vibrant lighting for explosions and sunlit Samoan landscapes.

At least the Blu-ray edition comes with a Dolby Atmos track, so I was able to completely immerse myself in this powerful and explosive audio experience. Every speaker was working overtime with prioritized and positional audio, even from above, and the dialogue was perfectly balanced to the front and center channels and mixed so that you didn’t miss a word no matter how loud the sound effects and score got. This was truly a fantastic audio experience.

Fast & Furious Presents: Hobbs & Shaw comes loaded with extras kicking off with an Audio Commentary with Director David Leitch who covers every aspect of making this film in a comprehensive and entertaining track. Next up is an Alternate Opening that totally remixes the first ten minutes of the film to intercut Hobbs and Shaw’s opening montage with the virus heist. Both options were pretty cool but I could see how the more linear storytelling worked better for mass audiences. Then you have 34-minutes of Deleted/Extended/Alternate Scenes, before going into a breakdown of Johnson & Statham: Hobbs & Shaw detailing the actors’ relationship compared with their characters’. Progress of a Fight Scene with Director David Leitch takes a deep dive into physical and weapons-based combat while Practical Action explores fight choreography and how the actors prepared for the epic battles.

The Bad Guy gives us a brief look at the film’s super villain and how Idris Elba’s embodied the role. The Sister is a nice character profile on Hattie Shaw and how she relates to the story and other characters, and then we climb the Hobbs’ Family Tree where we learn the importance of family in the franchise. The Matriarch gives us a peek at Queenie’s cameo as Hobbs’s mamma while New Friends showcases Ryan Reynolds and Kevin Hart and their contributions to the film. Elevator Action goes into detail on one of the film’s major action set pieces then Stunt Show and Tell dives into a few of the film’s top action sequences and how they were made. Keeping it in the Family: A Conversation with Roman and Dwayne continues the theme of family when the actors discuss their relationship in and out of the WWE ring. Blind Fury is a nice tribute to Dwayne’s grandfather and finally, Dwayne and Hobbs: Love at First Bite is a short look at Dwayne’s actual dog that starred in the show and got to hang out on the set. There is also a DVD copy of the film as well as a Movies Anywhere digital code.

Fast & Furious Presents: Hobbs & Shaw is a bit hit and miss for me. Now that I have seen and reviewed it I can rewatch as often as a like and skip the parts I don’t like. I don’t mind arguing as long as the banter is witty, but the words coming out of these two major stars’ mouths were painful to hear. Thankfully the action, car chases, running down buildings, skydiving into a power plant, and epic Samoan battles saved the film from being a total loss. The presentation quality of this Blu-ray is astounding from the pristine picture to the immersive audio, and with plenty of extras to keep you entertained after the movie, this is definitely worth adding to your Fast & Furious collection.