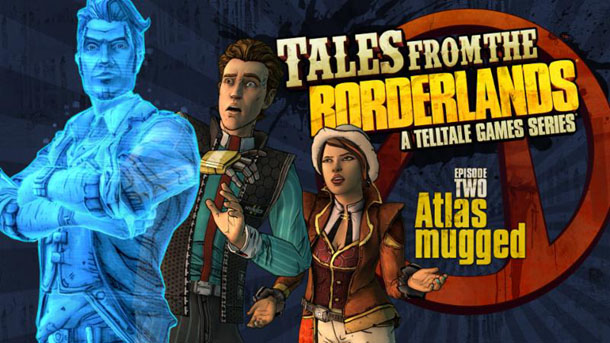 Today we would like to share the world premiere trailer for Episode 2 of Tales from the Borderlands: A Telltale Games Series.

In this second episode of the season, ‘Atlas Mugged,’ the discovery of the Gortys Project fuels a madcap race to find just what the Atlas Corporation was up to prior to Hyperion’s take over of Pandora. Our intrepid heroes are not the only ones on the trail. Vault Hunters, Bounty Hunters, Vasquez, and a giant monster thing with a mouth that looks like a… well, you’ll see… are all in pursuit. And to complicate matters, Rhys is being haunted by visions of a dead despot AND what Vaughn looks like without his shirt on. Can Fiona and Sasha hold everything together? That’s up to you.

The episode is expected to be available for digital download the week of March 17th on PC/Mac via the Telltale Online Store, Steam, and other digital distribution outlets, and on PlayStation 4, Xbox One, PlayStation 3, Xbox 360, Android, and iOS devices. Follow Telltale Games on Twitter and Facebook for the latest details on exact release dates as they are confirmed.

GamesBeat awarded the season premiere of Tales from the Borderlands a 96/100 score, calling it, “A hilarious knockout,” adding, “Zer0 Sum stands tall as the ultimate point-and-click science project: combine the beloved Borderlands lore and setting with the shining vision of an artistic studio, crank up the heat, and enjoy.” GameSpot awarded the episode a 9 out of 10 score, calling the episode, “…a beautiful new twist on the Borderlands experience with loveable leads and breathless action sequences.”  Destructoid also awarded the game a 9 out of 10 score, saying, “Telltale really knocked it out of the park with this one,”  later adding, “…this might be the funniest Borderlands game to date.”

Players will control two characters throughout the season: Rhys, a Hyperion ‘suit’ with dreams of being the next Handsome Jack, and Fiona, a Pandoran con artist looking to score her biggest ever swindle. Rhys and Fiona are thrown together as unwilling partners in an adventure to recover cash they both think is theirs. This journey will take players on a wild ride where gangsters, bandit lords, and Vault Hunters are just some of the obstacles they will encounter in this new take on the award-winning universe created by Gearbox Software.

Tales from the Borderlands: A Telltale Games Series – Episode 2: ‘Atlas Mugged’ is rated ‘M’ (Mature) for Violence, Blood, Language, and Use of Alcohol by the ESRB. The series is published digitally by Telltale Games in partnership with Gearbox Software and 2K.