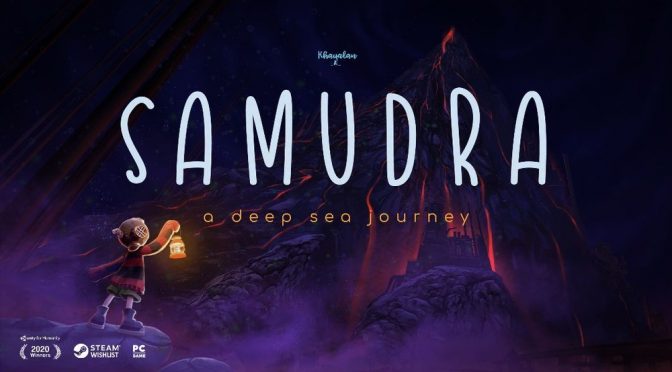 In SAMUDRA, the player takes on the role of a child who must go on a perilous journey to uncover the truth about why and how Surface-Dwellers allowed pollution to run rampant on Earth.

In the not-so-distant future, the world has been completely swallowed up by a toxic flood caused by climate change. Most animals are extinct, resources are scarce, and there are only a few safe havens left on the surface – now occupied by the remaining Surface-Dwellers, who require a breathing apparatus to endure Earth’s toxic atmosphere. But now the Surface-Dwellers are turning to the sea for their resources.

One of the remaining Surface-Dwellers – a child named Trip – helplessly sinks to the bottom of the sea. Away from civilization, he must go on an underwater journey across the ocean floor – facing horrific pollution and bewildering underwater creatures on the way to the surface.

SAMUDRA’s story is told without dialogue. The visuals, mood, creatures, and sounds of the deep carry a warning that we all must heed if we intend to stay on this planet: polluting the world’s oceans will not only dramatically change life as we know it, but possibly end it altogether.

Profits from the game’s sales will partially fund a year-round collaboration with the Indonesian Environmental Activist Circle to reduce plastic usage in Indonesia by 70% in 2025.

SAMUDRA was one of the five winners of the Unity For Humanity Grant – part of the Unity Social Impact program, which celebrates and empowers creators who are using real-time 3D to inspire change.

The Deluxe version – which includes a Digital Artbook and Original Soundtrack – will be available on Steam Wednesday, September 29 for $11.24 (also 25% off). On October 6, it will return to its retail price of $14.99.