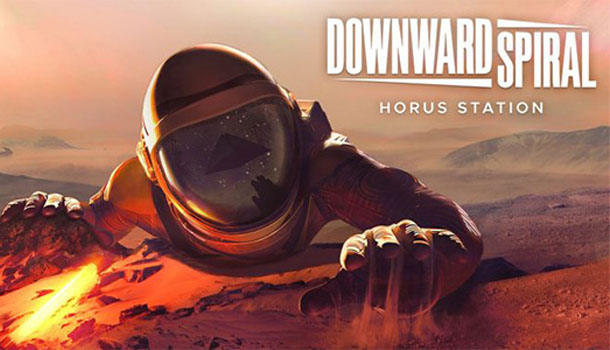 Just over a year ago 3rd Eye Studios released Downward Spiral: Prologue, an ambitious venture into a hybrid PC/VR release. While neither version really knocked our socks off, virtually or otherwise, we were more than happy to check out the first major (and more refined) second installment in this episodic series. When Prologue released it had the disadvantage of trying to shine amongst a sea of other zero-G space games, but that genre seems to have dried up over the past year making Downward Spiral: Horus Station feel surprisingly fresh, despite nothing changing within the core premise of the game.

Exploring an abandoned space station has been done numerous times, most recently in Tacoma, but Downward Spiral: Horus Station definitely offers a unique perspective to the sub-genre, especially when played in VR using the Rift or Vive. Despite some glaring flaws, mostly having to do with locomotion, nothing can match the added immersion of being totally encompassed within this game’s futuristic and often sinister environments made even more creepy thanks to the ambient soundtrack composed by Ville Valo. 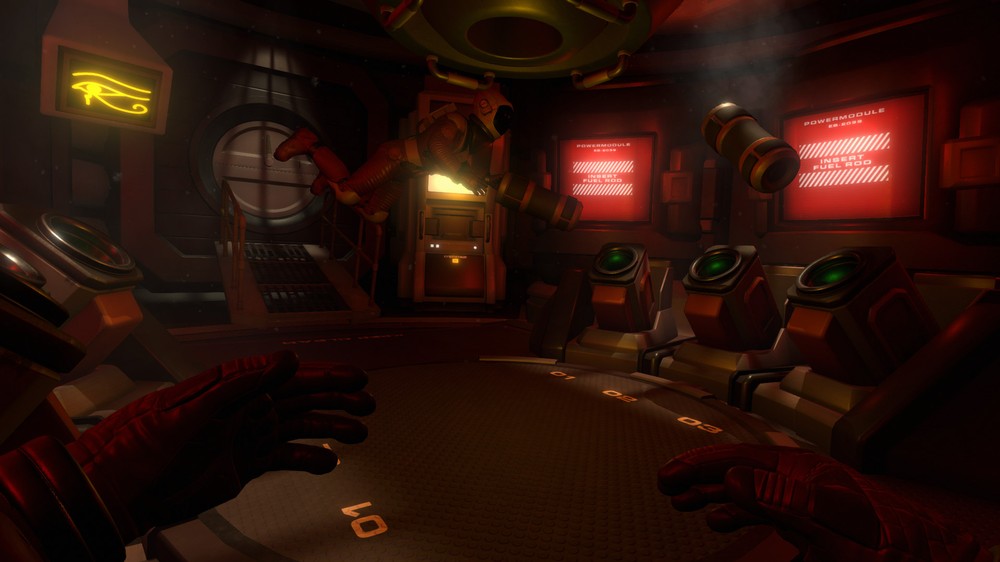 To their credit, the designers have made the game playable without VR, which will hopefully help boost the community. A lack of players for the Prologue game was one of my key criticisms, but even if you aren’t in this for the two-player co-op or 8-player deathmatch you’ll still find plenty to do in the solo exploration game, which actually offers an Explore mode void of all enemies; a thoughtful touch for anyone who just wants a casual VR experience without the threat of dangerous robots.

My main complaint with Prologue still remains though; that being the awkward movement system within the game. While I appreciate the attempt at a realistic zero-G simulation where you must grab handles, consoles, or even the wall, ceiling or floor to push and pull yourself around there needs to be a more intuitive way to micro-thrust yourself around the environments. The Jet Gun is a good start, but you don’t get that until several Acts into the game. All too often you are forced to SLOWLY drift across large expanses and one time when I opened a particularly large door it split open leaving me floating in the middle of the doorway. I couldn’t reach anything to move myself and literally had to take two-steps in the real world (essentially leaving my body in the game) to grip the side of the door and move forward. Adding even more frustration to just getting around is the fact that the environments remain very “sticky”. I will forcefully push off a wall and if I brush up against anything I immediate stick to it rather than bounce. It’s like my spacesuit is made of Velcro. 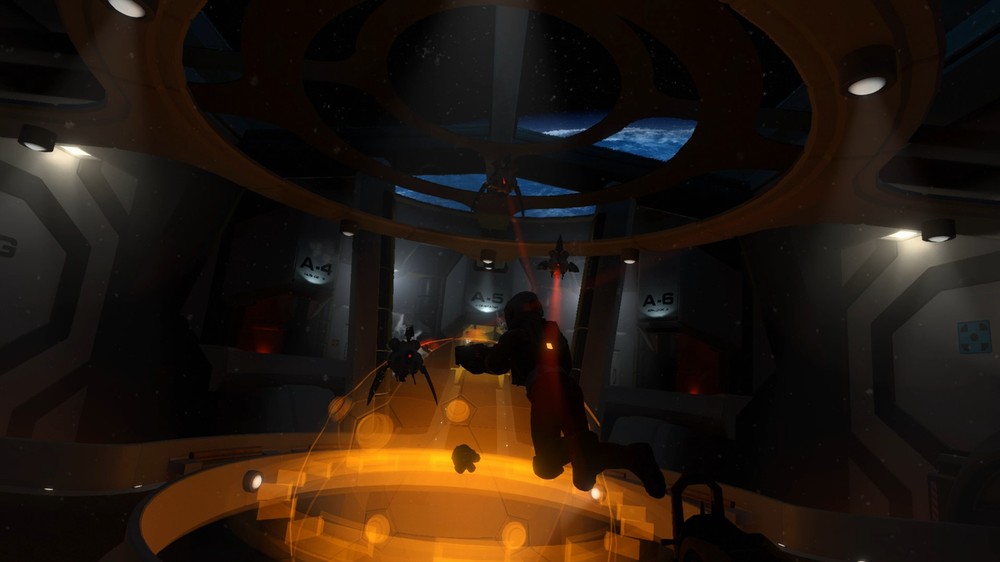 One nice addition to Downward Spiral: Horus Station is the laser sights on the weapons, so you have some indication of whether you are going to hit your target. In Prologue you had to actually aim down the sights. I’m not sure what the life and death mechanic is in the game. If you get shot too many times you are put in an unlocked detention cell, or perhaps it’s a cloning chamber since the one time when I died in the chamber and spawned my previous body was floating in front of me. There was one really annoying instance when 4-5 security bots shot me then floated outside the door of the spawn room, repeatedly gunning me down when I tried to leave.

Aside from a few robot gang muggings I did enjoy the combat in Downward Spiral: Horus Station, especially with the larger and more tactical bosses that required targeted attacks or use of the EMP gun if you have it. There is a surprising amount of interesting and effective weapons and I appreciated the easy inventory system of stowing and drawing your weapons with a simple button press and hand movement. 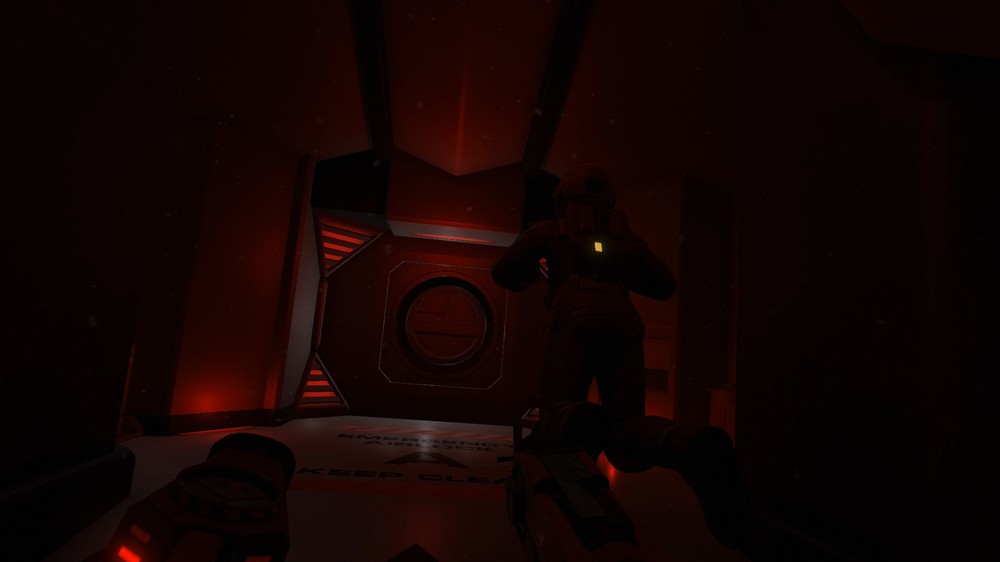 I really wanted to like Downward Spiral: Horus Station, but with a lack of any compelling narrative to push me forward, the lure of exploring the unknown simply wasn’t enough to motivate me past all the annoying elements such as sticky movement and the repetitive cycle of gameplay. It’s a shame because I love the environments and the overall station design that gets more interesting the longer you play (especially the final 2-3 levels), plus there is that uneasy feeling of being lost in space, even if the graphics are fairly basic. While the low-poly construction and minimal textures are perfect for VR, Horus Station looks more like a stylized Switch game when played on a standard screen. The use of vivid colors and real-time lighting really contrast with what is usually a dark and slightly spooky experience.

I hate to compare one game to another but in this case it’s nearly unavoidable. Lone Echo seems to have set the standard for zero-G space games, and even though it’s twice the $20 price of Downward Spiral: Horus Station it earns it with an astounding single-player experience still unmatched today. While the multiplayer deathmatch may appeal to some, I didn’t find shooting robots in single player that enjoyable, so shooting other players doesn’t appeal to me, and apparently not that many others as the few times I tried to rustle up an online match no one was playing. I’m not even sure why there is a co-op mode or what would change other than having someone to talk to while you explore the lonely station. I supposed a few of the bosses would go down faster if you double-teamed them. 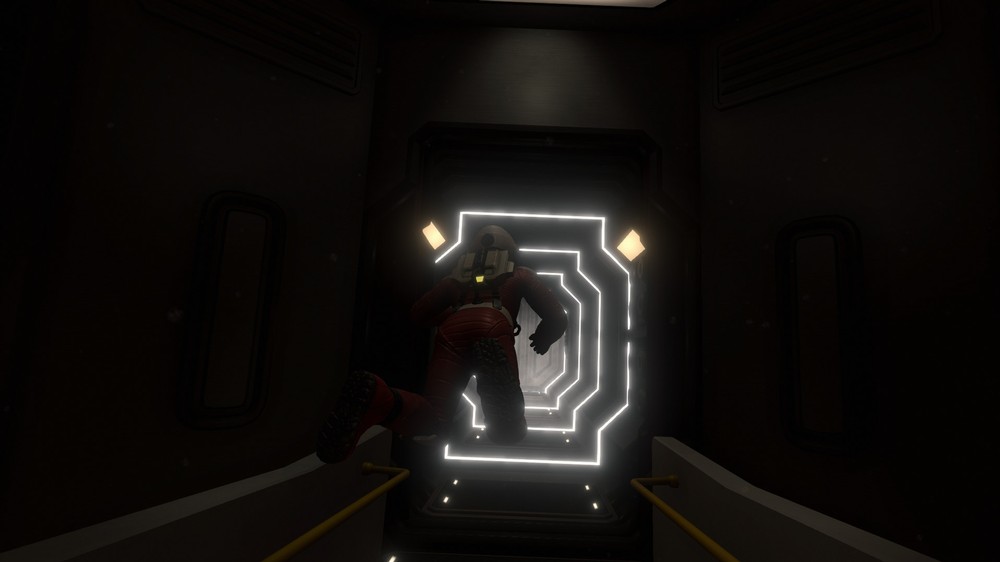 I have so many mixed feelings about this game. I love the genre and what the devs are trying to do, but this still feels like a game in the final months of Early Access. It just needs a bit more refinement, and thankfully the designers seem to be really good about patching this game post-release, but as it stands this is a tough sell, even at $20. I appreciate the fact that you don’t need VR to play this, but honestly, VR people are probably the only ones that will, and VR is where most of the issues lie. If you played Prologue and enjoyed it then by all means, dive right into Downward Spiral: Horus Station, otherwise you might want to wait for a sale or the next patch.