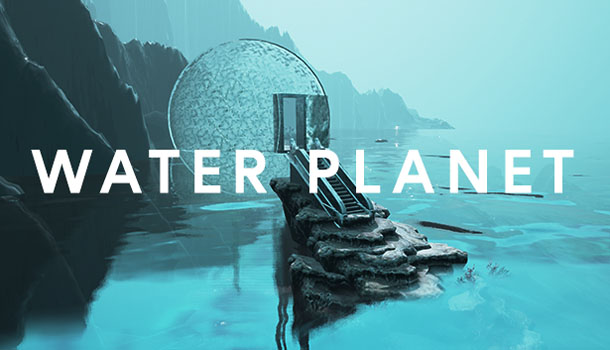 Music label and videogames publisher, The Revera Corporation, and developer-musician VIRGO, announced today that their debut VR title, Water Planet, is preparing for launch on PC, HTC Vive and Oculus Rift via Steam.

Straight out of a daydream, Water Planet is an immersive first-person VR exploration title, which started life as a visual accompaniment to VIRGO’s unparalleled live music performances. The game has been developed from the-ground-up with unmistakable visuals, inspired every step of the way by VIRGO’s Ocean Tech music style; blending house, trance and future beats genres.

Water Planet is set on a beautiful and mysterious distant blue world, not too dissimilar to a future Earth. Gamers will take on the role of an interstellar traveller gathering resources to fuel an interplanetary expedition. Amid endless oceans and mountains that cut through dense fog, players will stumble upon hidden temples and monuments just waiting to be discovered. Players must uncover the planet’s many mysteries as the on-board A.I., Gemini, guides them through vast underwater worlds and sunken ruins, echoing the atmospheric synths, soothing basslines and hypnotic vocals of VIRGO’s acclaimed Water Planet E.P.

The Publisher-Developer duo have confirmed that Water Planet will be available for fans to download in early October.

Follow VIRGO on Twitter and to tune into her regular Twitch stream for all the latest on Water Planet in the lead up to launch. Players can also join in the conversation on the game’s official Steam community hub.