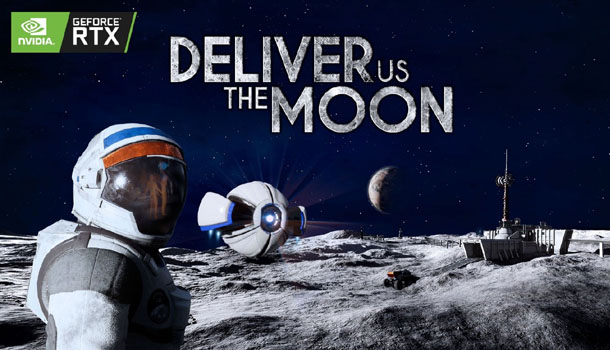 Award-winning publisher Wired Productions and pioneering Dutch game studio KeokeN Interactive are delighted to announce the incoming launch of real-time ray tracing support for the critically acclaimed sci-fi epic Deliver Us The Moon, touching down on all PC outlets including Steam and GOG.com.

Deliver Us The Moon utilises the full potential of the latest version of the Unreal Engine 4, alongside Microsoft DirectX Raytracing and NVIDIA DLSS technology, to deliver stunning real-time ray tracing and global illumination and one of the most graphically immersive worlds ever seen from an independent studio.

In celebration of the incoming update, Wired and KeokeN are launching giveaways and streams throughout the week with a plethora of prizes to be won, including an unforgettable trip for two to NASA in Orlando, Florida, to dine with an astronaut and embark on your very own astronaut training experience.

“We’re incredibly excited to finally bring GeForce RTX to Deliver Us The Moon today.” Said Koen Deetman, Co-Founder and CEO, KeokeN Interactive, “This incredible technology truly allows us to launch the game to new heights of visual fidelity. We’d like to thank our amazing community for their patience and hope they like what they see.”

“GeForce RTX is helping to bring a new level of immersion to Deliver Us The Moon,” said Matt Wuebbling, vice president of global GeForce marketing, NVIDIA. “KeokeN has taken a giant leap to enhance the lighting in Deliver Us The Moon – and laid down a marker for how independent studios can use GeForce RTX and real-time ray tracing to bring their cinematic visions to life.”

Powered by Unreal® Engine 4, Deliver Us The Moon is set in an apocalyptic near-future where the Earth’s resources have been depleted and humanity looks to the stars. Nations band together to create the World Space Agency – an organisation tasked with solving the extreme energy crisis. The solution: colonization and exploitation of the moon’s natural reserves of Helium-3 to serve the energy needs of a growing Earth population. Suddenly, and without warning, communications with the Moon cease, and the energy source is lost. Plunged into darkness and without power, years pass as world governments come together once more to embark on a new mission – to re-establish the energy supply and, with it, hope for the human race.

Deliver Us The Moon is out now on all PC outlets including Steam and GOG.com for Windows PC and the Utomik game service. For a full list of retailers visit www.deliverusthemoon.com. Prospective new astronauts will be able to grab Deliver Us The Moon with up to 20% off the SRP from selected retailers on December 19th.

Deliver Us The Moon for Xbox One and PlayStation®4 is in development and will release in 2020.  For more information, visit https://www.deliverusthemoon.com/ or follow the game now to receive future updates on Facebook https://www.facebook.com/deliverusthemoon or Twitter https://twitter.com/deliverthemoon.