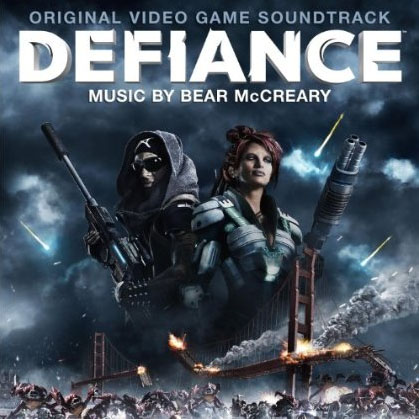 Sci-fi as a genre has an amazing history with the likes of Star Trek and BSG over the last few decades with iconic scores to go along with them. One new addition to the sci-fi genre is Defiance, the world’s first video game and TV show cross media event that features fast paced third-person gunplay on a futuristic Earth. The game not only has an interesting story but a wicked cool soundtrack to go with it which you can now buy with the release of the Defiance: Original Video Game Soundtrack.

For those not already firmly familiar with the music as they’ve made their way across the Bay area, Defiance’s score is composed entirely by Bear McCreary, the very same man behind BSG’s score. Bear has definitely brought his musical skills to the table to create a score that sets the very tone for the action of the game and in turn the show. If you’ve even loaded up the game or caught the opening moments of the show then you’ll have already heard the haunting yet kind of soothing tones mixed with ramped up electronic/dubstep beats of the Defiance Theme song. This song sets the tone for what the rest of this 24 piece badass score.

Defiance’s score by far is one of the most unique ones that I’ve ever heard in years. While I still love a good fantasy score filled with flowing music and war themes, this score is a real kick in the teeth to the MMO industry. Most of the tracks on this album have a real edgy modern bite to it. You’ll hear plenty of electronic and dubstep mixed pieces that really got my blood pumping even outside of the game. Tracks like “Mutants of Delta Bunker” and “AngelIsland” are easily two of my favorite standout pieces that feature that electronic bite but still manage to have a few moments of haunting calm in the middle before ramping up again to finish strong.

The score isn’t all dubstep and electronica though as there are several elemental pieces like “Votan Romance” and “Tranquility” that really balance out the rest of the adrenaline charged tracks. These pieces are every bit the flowing woodwind and violin melodies that I usually expect from a MMO, but they fit with the modern tone of the game brilliantly. One track that really stands out to me from the rest of the album, in a good way, is the song “Ninety-Niners”. This song features an amazing mix of modern electronica, bluegrass banjo, drums and the occasional guitar. This is one track represents an enemy faction of miners that easily have the best theme in the entire game.

Going into my review of the game, I knew the game was going to be different, but I had no idea that it would have a score this powerful to back it up. Bear McCreary is no stranger to the world of sci-fi and the score is absolutely amazing. If this soundtrack doesn’t make you want to dive into Defiance’s world I don’t know what will. For those who enjoy Defiance already or just like Bear’s work this album alone is a must buy.