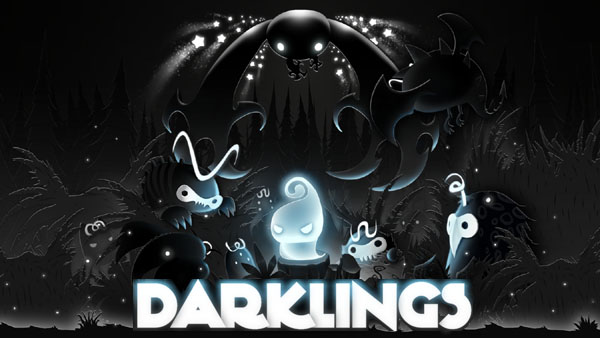 Darklings is the latest mobile game to capture my interest and dominate my casual game time, and what a refreshing surprise it was.  I’ve played dozens of games that share this stylized look; games like Limbo, Badlands, Contre Jour, etc. but none have shared the singularly brilliant, seemingly easy, yet fiendishly challenging gameplay of Darklings.   Presented in the growingly popular survivor mode where you get a single attempt to see how far you can go, Darklings puts you in a sinister black and white 2D world and asks you to defeat as many enemies as possible before they eventually overwhelm you.

You play as a ghostly figure that looks like an evil version of Casper with a cute twirl to his top.  Level by level, wave after wave, enemies of assorted shapes and sizes will creep in from the sides of the screen toward your location.  Your only means of defense (and attack) is to draw the symbol on the enemy of your choosing.  This will instantly warp you to their location and envelope them in your “sheet”.  After a brief animation that looks like you are digesting them the enemy will vanish, leaving behind a trail of stars that you must quickly connect with a finger-drawn line back to your character before they float off the top of the screen. 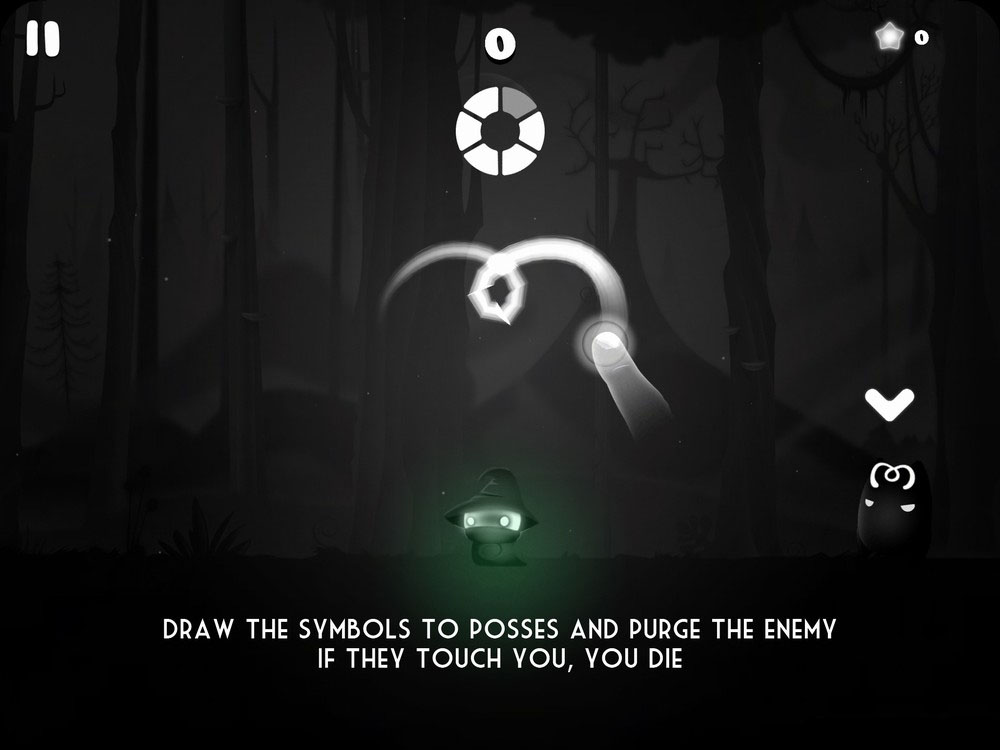 Sure, this sounds easy in concept but now factor in a timer that is constantly ticking away and the only way to put more time segments back on the clock is to consume stars.  Then factor in an increasing number of enemies that move faster than those that came before.  You must now prioritize which enemies to consume, often moving on to the next just to stay alive while possibly leaving behind valuable stars.  The only way to move your character is by attacking a shadow creature and warping to their location, which just might put you in a cluster of new enemies.

The symbols start off easy enough like a U or a cursive L or maybe a wavy line, ram horns, or any number of swirly lines.  The trick is not only being fast but also accurate.  I found that drawing large symbols across the entire iPad, while taking a bit more time, seemed to prove much more reliable than trying to draw symbols small and fast, especially when one failed symbol can end your game.  Boss battles will test your reflexes as they will toss out a series of random symbols that you must quickly trace before they hit the ground.  Just one miss and you restart the level.

My biggest enemy seemed to be time.  I had no problem keeping the enemy from reaching me, but no matter how diligent I was in dragging those stars down to my ghostly form I always seemed to run out of time long before reaching the boss.  Naturally, the game offers an upgrade shop where you can purchase useful items for both defeating enemies and extending your time.   Items are very expensive, costing way more stars than is seemingly possible during casual gameplay.   I suppose if you play this game for hours on end you can save up enough to buy a few items, but the game clearly wants you to spend real money to buy more stars to buy these upgrades. 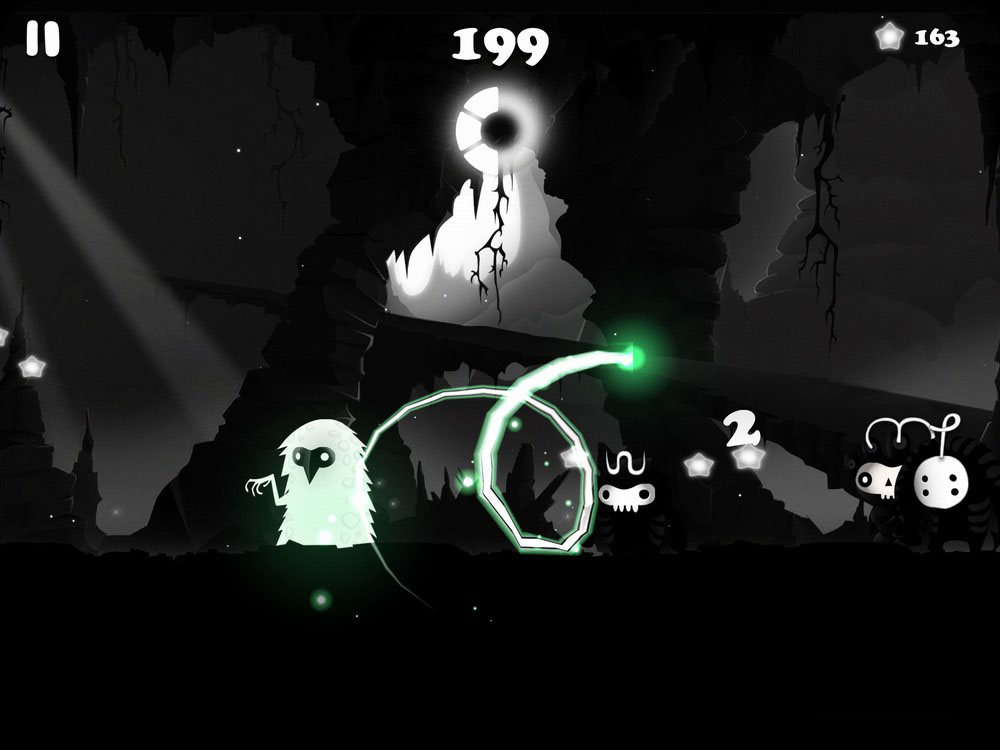 The game is only $1 so it might not seem like a complete rip-off to purchase extra stars that come in varying packs of 5,000 ($1) up to 100,000 ($10).  You can also earn 250 stars by annoying your Facebook friends and Twitter followers.  At least the game doesn’t shove the store or in-app purchases down your throat, which also makes me inclined to drop a few extra bucks on the title.  I don’t like “pay to win” but I don’t mind “pay to enjoy” and extra stars means extra power-ups that will extend my game and my overall fun.

You can start your Darklings addiction for only a dollar, and if you like the concept and want to really dive deeper into the game an in-app star pack purchase isn’t out of the question.  With a fun drawing concept tailored for the iPad, dark, sinister, and yet somehow gorgeous Tim Burton stylized graphics, and an eerily haunting soundtrack, Darklings is definitely worth a look and even better played in the dark with some headphones. 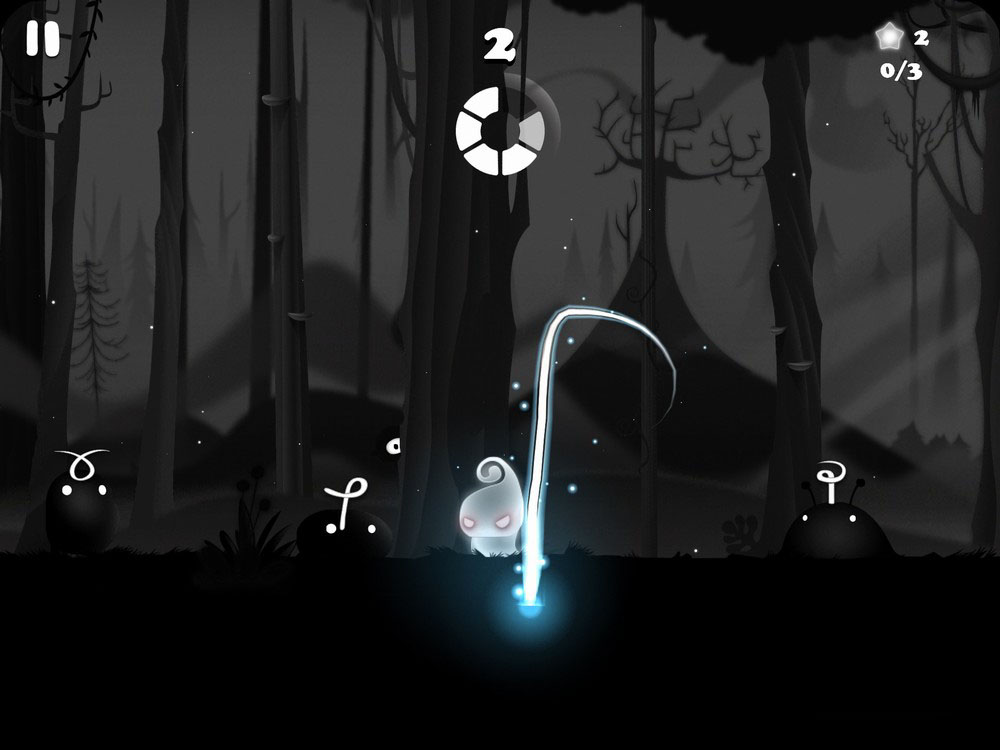 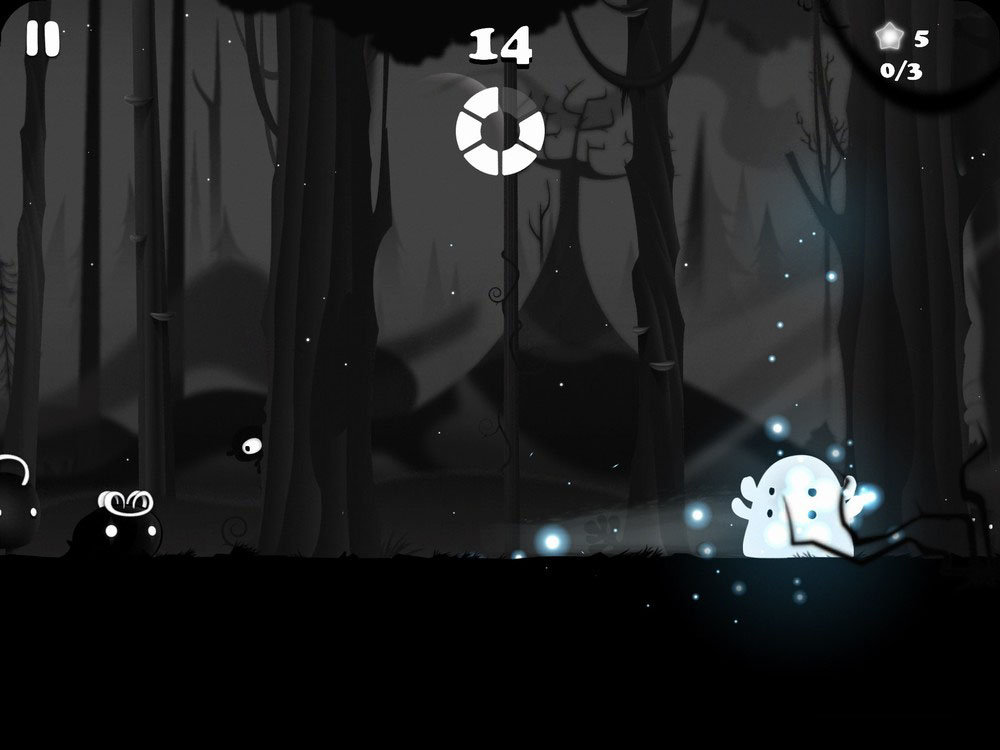 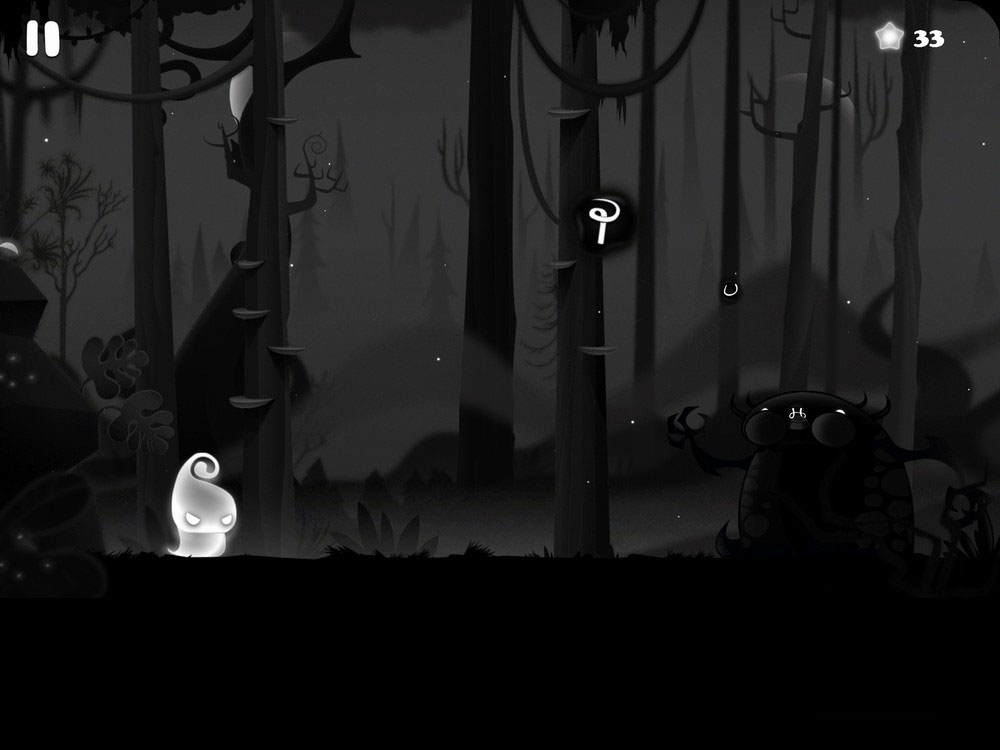 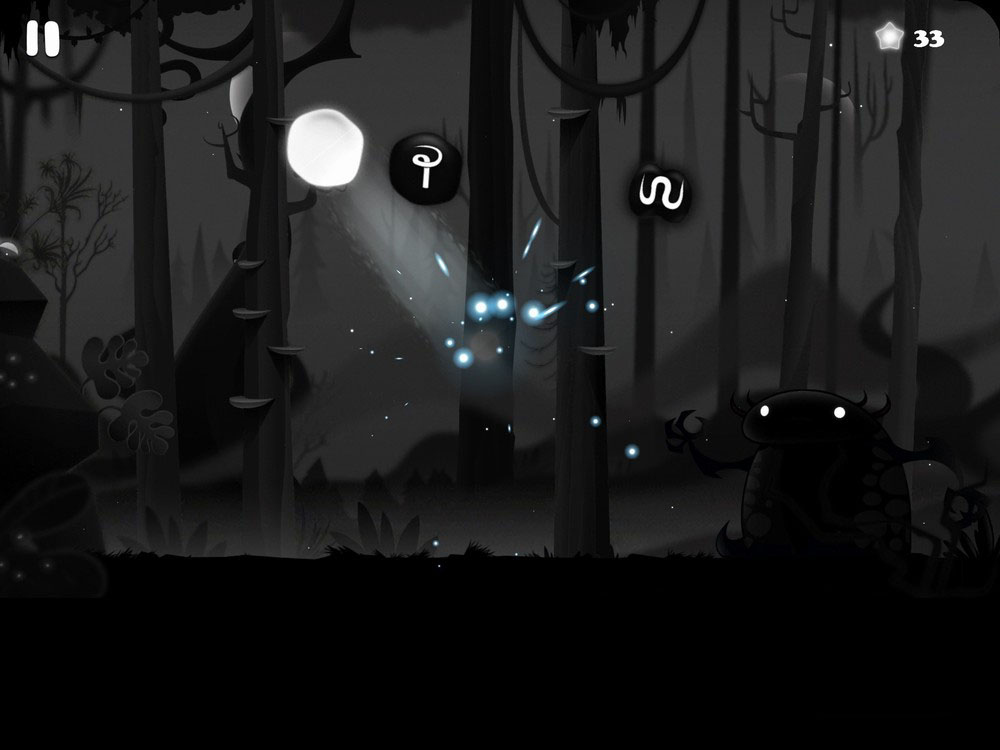 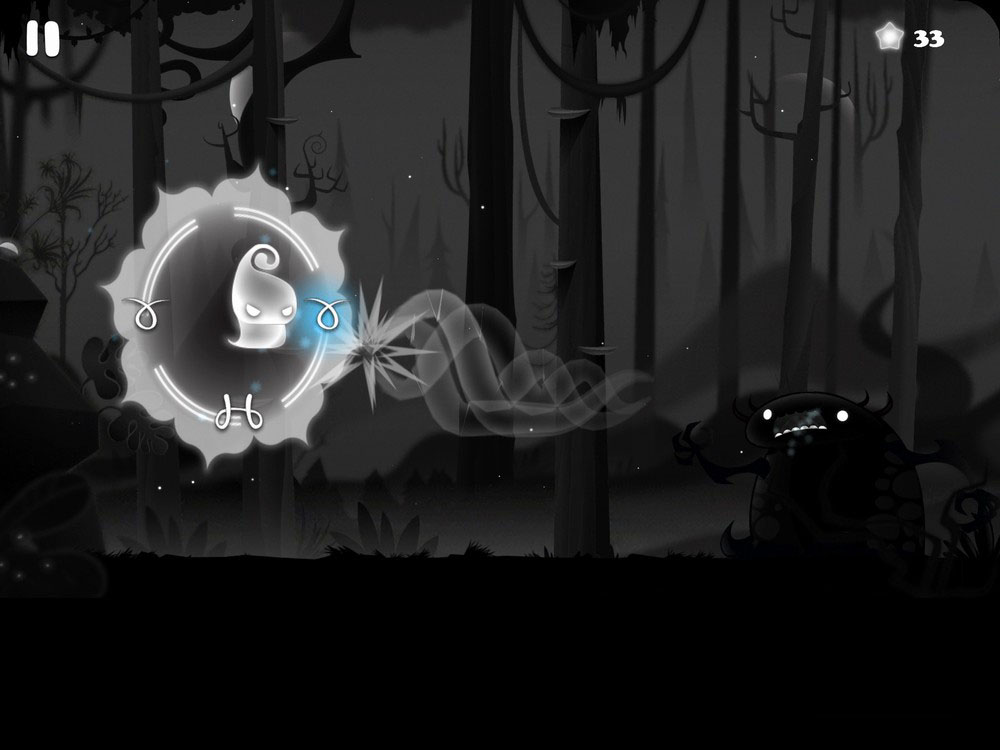 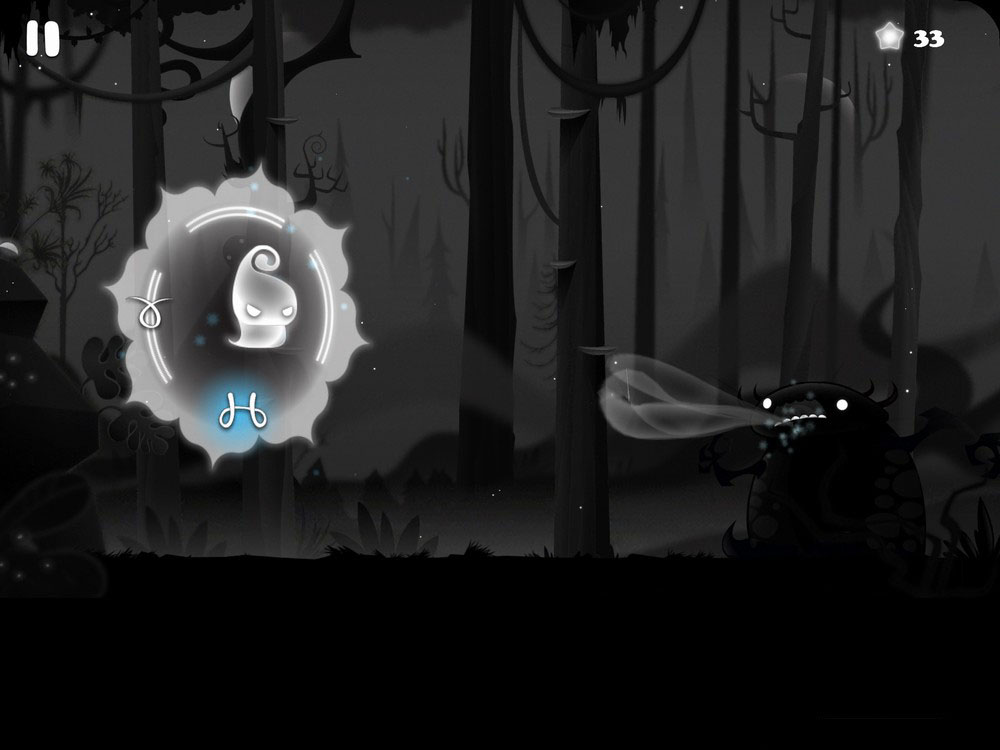 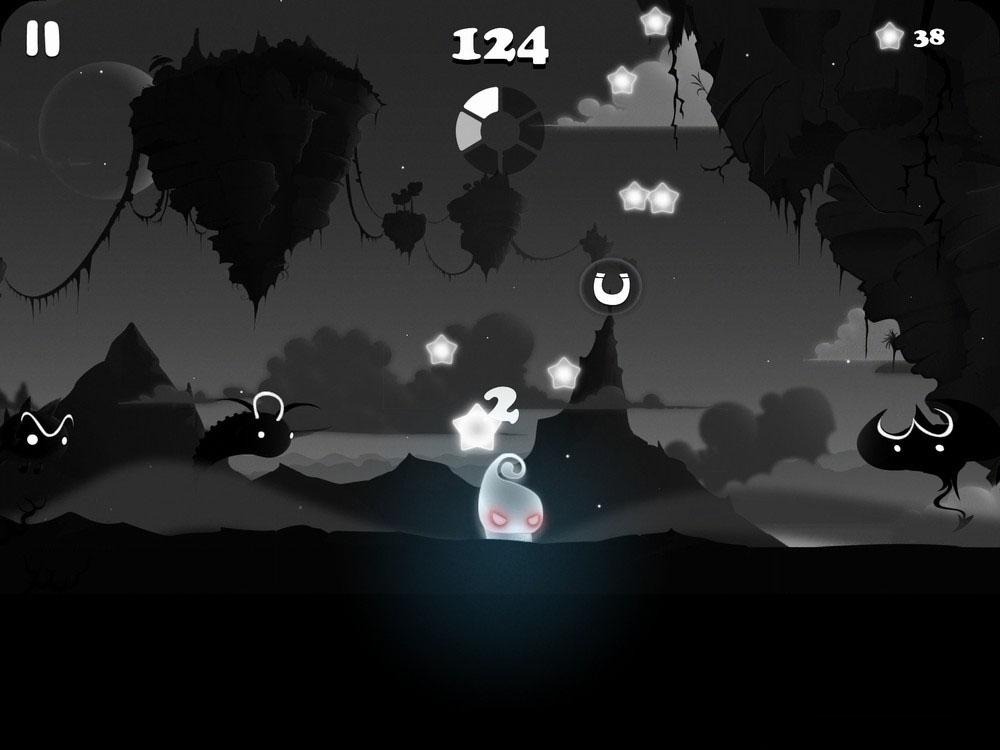 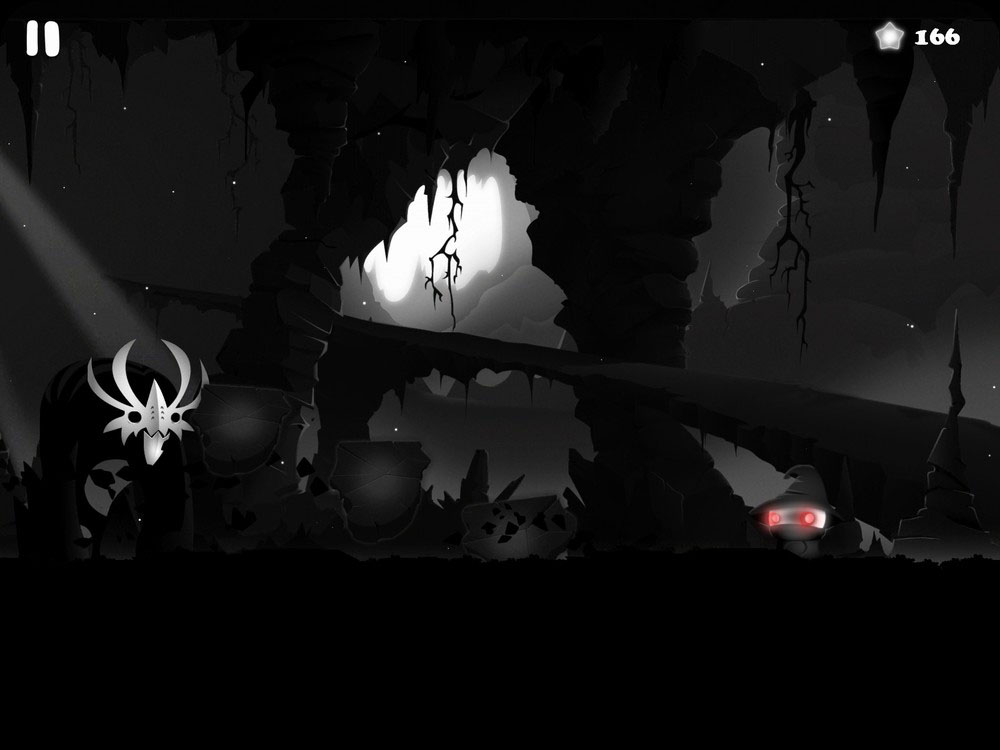 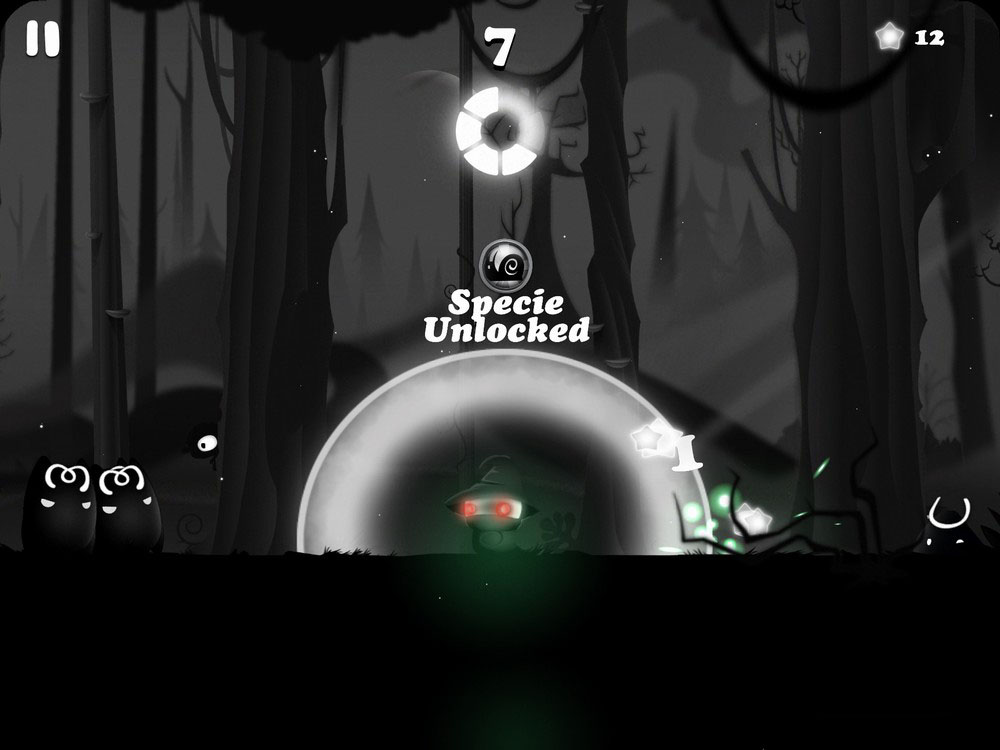 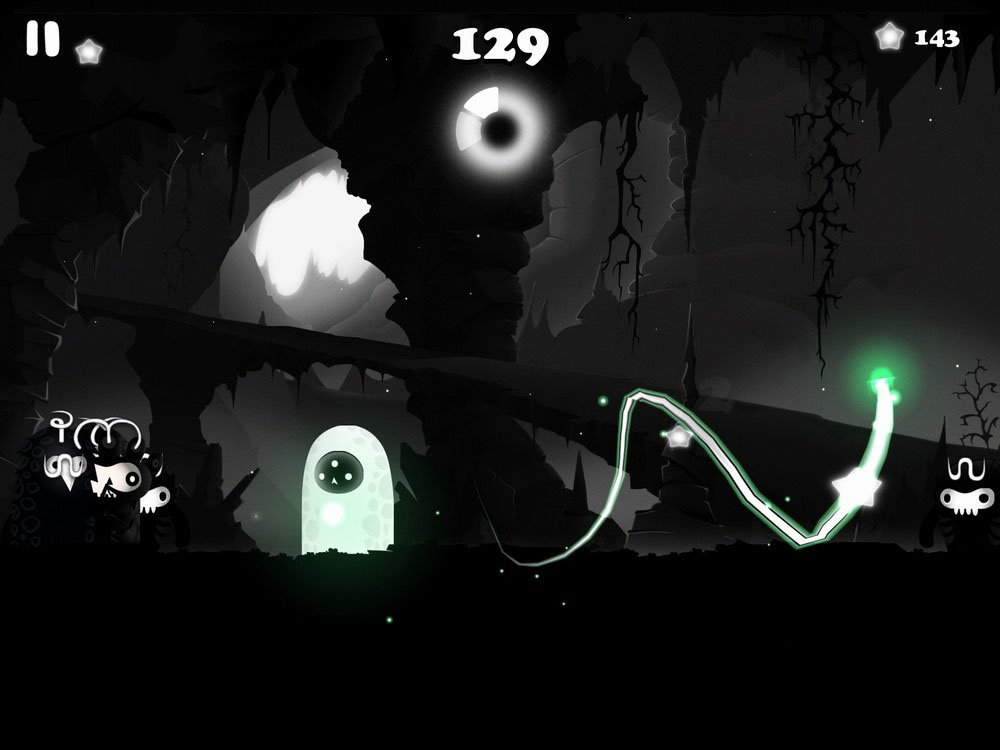