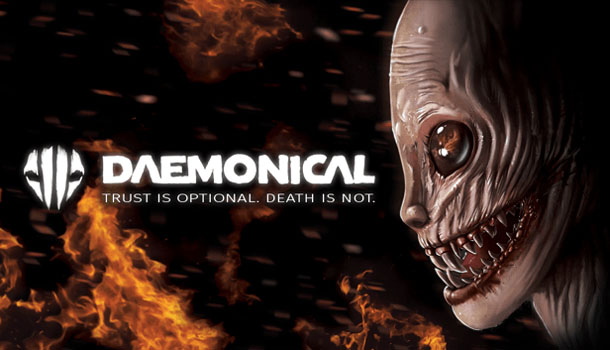 Today Fearem, developer of horrific asymmetrical multiplayer Daemonical on PC Steam is pleased to announce that the blood, sweat and tears that has gone into development of Daemonical has finally concluded as it will be released in early access next week on 15th August to send shock waves throughout the horror genre!

Set on a remote island up to five players start what is a scary and immersive struggle to stay alive in a ‘match’ for survival that starts at 4PM, followed shortly by a demon transformation occurring, which is randomly selected from the group of players. No one knows who the demon is, even the demon himself, until it is time to transform! The air is crackling with tension and the Island seems abandoned, but was clearly inhabited in the past, with many ran down and desolated shacks and houses left around it. There is a strange and compelling mystery around the island and its past, but that is shrouded in a deep and uncomfortable story to be unraveled at a later date.

Daemonical commences with players spawning around what seems to be an altar area, with a skeleton perched on top of it but with bones clearly missing. Their objective is to find the bones and bring them back to the altar. The humans must search for the ‘hot points’ on the map for bone parts. Throughout the task they can find weapons and tools to help them defend themselves in case of a demon attack and they can abandon the bone parts task and merely decide to hide somewhere instead until the morning in order to win. However, this has a number of drawbacks as you will find out!

Daemonical’s presentation, progression line, interface and game manipulation has been a big focus for the development team.  The demon’s sole focus is to find the survivors/ humans and kill them, that is its primary goal. Humans will utilise a ritual cut on their left hand, that will aid the player directionally to find the missing ritual parts. Once found, the ritual bone will need to be picked up carefully, with each mistake gravely punished with a loud noise that attracts the demon.It needs to be brought back to the altar, when the process repeats itself. The demon has its own methods when searching for humans. Souls glow while distant, but once it gets closer, it must find and locate them manually. It will observe them if they are armed or numerous – decide on a tactic, plan of attack – attack them killing them one by one – wipe them out and win before morning.

Daemonical presents differing gameplay depending if you play as Demon or Human which is played within a specified match time. The winning criteria for both – Humans – find 4 ritual parts and bring them back, or run and hide until the morning. Demon – killing 4 remaining humans before morning presents double gameplay value! Action, be it stealth or out and out dynamic activity, adds subtlety throughout with strategic forethought which is essential in what is a do or die scenario with shocks and surprises constantly giving Daemonical a feeling of being part of a horror movie!