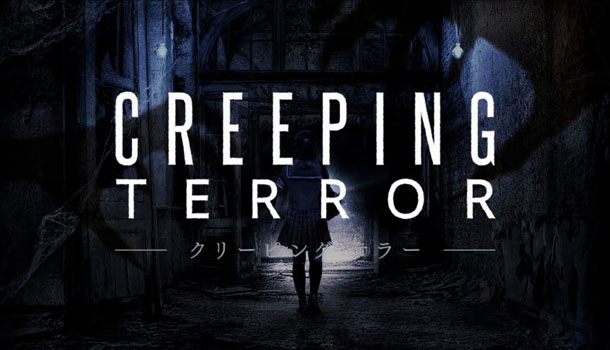 When you think of 3DS games, you probably think of child-friendly adventures or action filled romps through magical lands, Creeping Terror is none of those things. It is a very scarce genre as far as the Nintendo brand is concerned, a horror game. It was honestly quite a disappointment to find that one of the only horror games on the 3DS store is lacking in scares. The game is attempting to pay homage to a bygone era of horror games, and is especially reminiscent of the 1995 game “Clock Tower.” 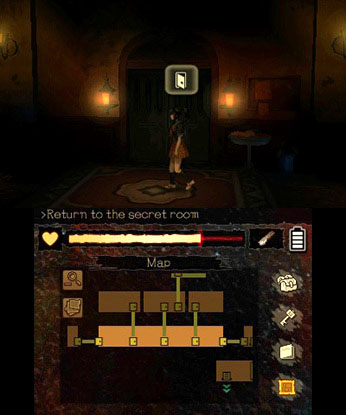 The story of the game is simple enough, a small group of friends gather together to try to record proof of a monster that is rumored to haunt a nearby house. As they explore, one of the kids falls down into a tunnel system hidden beneath the house, where she is pursued by the monster Shovel Man. The plot itself is rather unremarkable, it’s standard cliché horror movie fare, but in the horror genre the story is allowed to be weak. This is because while an engaging story is preferable, whether or not a person enjoys anything in the horror genre is dependent upon the atmosphere it creates, and whether the atmosphere is crafted well enough to instill fear in whoever is experiencing it.

Sadly, Creeping Terror falls flat on that front as well. While the game had several opportunities to create a genuinely tense and frightful atmosphere, it ultimately handles them in a way that robs them of any potential they might’ve had. Two perfect examples of this are the flashlight system and the monster scenes.  In Creeping Terror, the main character can use their cellphone to shine light on objects in front of them; however, their phone has limited charge and to replenish your battery you need to find charger packs. This would normally be a good way to induce stress, as management of a resource means the player must be conscious of their every move, but charger packs aren’t exactly scarce and you can carry more than one at a time.

The monster is a similar case of wasted potential, as early on you are given a clear method of defense against him. Avoiding capture is made quite easy, as a throw of a rock or button-mashing can make your escape trivial, making any appearance of the monster more frustrating than scary.

The price tag on Creeping Terror is rather low compared to many games on the eShop, only costing ten dollars. The game itself doesn’t make itself scary or entertaining enough to spend that amount without regret. The only way this game will make itself endearing to the player is if they’re desperate for a horror game on their 3DS or they’re a big enough fan of Clock Tower to want to play a much blander version of it.

To sum up, Creeping Terror is a game with tons of wasted potential and okay concepts that only a select niche of people will enjoy. It’s bland and forgettable, and will most likely fail to leave an impression on whoever plays it; I’d give it a 1.5/5.