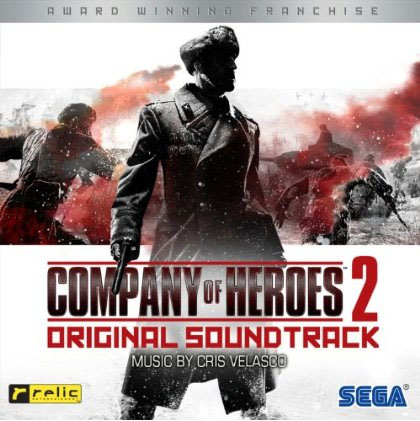 One of the things I enjoy about reviewing video game or even movie soundtracks is seeing how well the music works outside of the original source material.  Many times I have been driving down the road listening to some music from a game I played months ago and start having these images of what was taking place when that track was playing.    The Company of Heroes 2 – Original Soundtrack is a different animal entirely, as I have never played the game, so this review is basically going to be how well this music stands up on its own merit.

The first thing I noticed about Cris Velasco’s score is how cinematic it is, sounding much more like a movie soundtrack than something created for  a repetitious strategy game.  There was this constant rise and fall of the melodies that made excellent use of what I can only assume was a full orchestra.  While I can’t say what was taking place in the game during these 26 tracks my imagination was sparking with all sorts of imagery.

The score has a definitive Russian flavor about it evoking memories of Hunt for Red October.  For as many songs that are as dramatic and tell a story with notes instead of words, there are just as many tracks with an almost overbearing sense of military presence that can often explode with percussion much like the raging battlefields the music supports.  And in those quieter moments there is a distinct feeling of cold isolation and despair.

Company of Heroes 2 – Original Soundtrack has some great music, but I wouldn’t classify it as “casual listening”.  It is very dramatic and at times very intense, so while it might not make the best road trip music it is perfect for when you are hunkered down in your basement painting miniature soldiers and planning your next tabletop reenactment of the Battle of Stalingrad.   The soundtrack is available on iTunes for $10 or if you want a physical CD you can find the Company of Heroes 2 – Original Soundtrack over at Amazon for $15.  It’s great music, even if you never played the game.