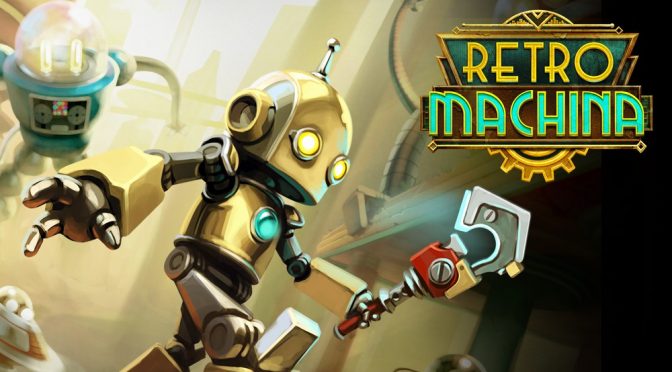 Today Super.com and developer Orbit Studio are thrilled to announce their retro-futuristic action-puzzle adventure Retro Machina is now available for Windows PC via Steam, Xbox, PlayStation 4, and Nintendo Switch! Recently awarded “Best Brazilian Game” at BIG Festival, Retro Machina places players into the metal boots of a lonely worker drone cast out from his society for his malfunctions as he seeks to uncover the mysteries behind the robotic world in which he lives. Set out on a charming adventure to explore the bizarre and desolate lands outside of the shining — but increasingly difficult to maintain — Endeavor City.

Inspired by the works of legendary science fiction authors like Arthur C. Clarke and Isaac “Three Laws of Robotics” Asimov, Retro Machina evokes feelings of nostalgia mixed with hope for the future in a charming, retro-futuristic aesthetic. For hundreds of years, the sprawling high-tech metropolis of Endeavor City has been dutifully maintained by a society of robots that follow a strict societal rule: no imperfections will be tolerated. One such worker drone begins to question the history of Endeavor, and upon being cast out, must explore mysterious, ruined lands beyond the glass dome that encompasses the city. Players will use their wits — and a few spare parts — to outsmart enemies, solve puzzles, and finally get the answers they seek.

Retro Machina is available now for Windows PC via Steam, PlayStation 4, Xbox One, and Nintendo Switch.