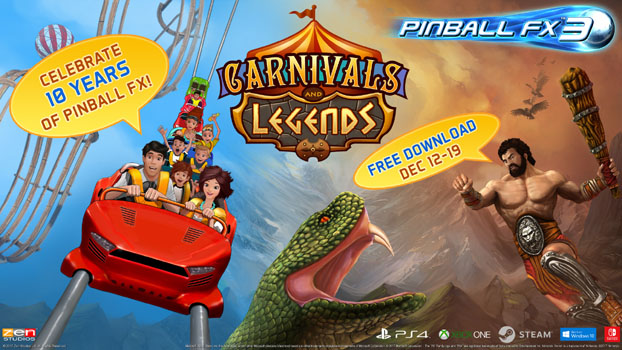 Zen Studios announced that its newest two-pack of original tables launches today—and to celebrate 10 years of video game pinball excellence, it’s absolutely free to Pinball FX3 players for one week from December 12 – 19, 2017. Known as Carnivals and Legends, the pack joins dozens of other premier video game pinball experiences that can be played through the downloadable Pinball FX3 service on PlayStation 4, Xbox One, Steam, Windows 10 and—newly available as of today—Nintendo Switch. Meanwhile, those who prefer iOS, Google Play or Mac can also download Carnivals and Legends for through the Zen Pinball app.

The two tables that comprise Carnivals and Legends—“Adventure Land” and “Son of Zeus”—take Zen back to its video game pinball roots, as unlicensed creations based on original concepts. They also take players back in time in a couple of different ways.

While most Zen tables are known for their refined mix of traditional pinball gameplay and video game elements that no real-life table could ever pull off, “Adventure Land” greatly favors the former. A digital ode to 1990s arcade pinball, it emphasizes core design over spectacular visual effects—though with fireworks, fireballs and animated 3D models, there are still plenty of those. As they play through a dozen game modes, fans of arcade pinball will delight in the way “Adventure Land” feels like something they’ve played but is indeed brand new.

The first video pinball table to ever feature dynamic weather effects, “Son of Zeus” takes us back in time in a whole other way—through ancient mythology! Determined to reach the top of Mount Olympus, Hercules confronts the likes of a fully animated giant snake and an active volcano that transforms into Cronos, the mighty Titan. The voice of Hera ruthlessly challenges the man-god, as he also faces threats from such iconic mythological antagonists as the Hydra, the Cerberus and Medusa—who can turn a player’s ball to stone!