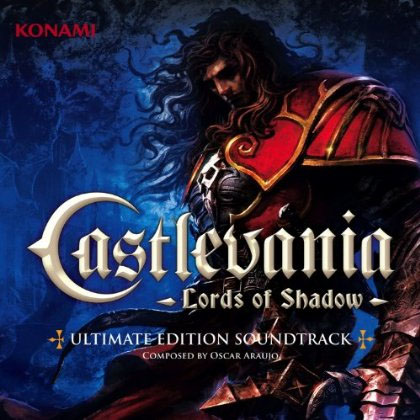 Castlevania: Lords of Shadow was an incredible game when it launched on consoles back in 2010 and it got even better when Konami released the updated Ultimate Edition on Steam/PC in September.    While I distinctly remember enjoying the music on the console, and again on the PC, the score always seemed to reside in the background, supporting the story and the action but never overwhelming it, which is exactly what a good soundtrack is supposed to do.   But it wasn’t until I started listening to the Castlevania: Lords of Shadow – Ultimate Edition Soundtrack outside of the game that I was completely blown away with just how epic this score truly was.

Spanish composer Oscar Araujo has crafted something quite remarkable; a score that would be worthy of any feature release Hollywood fantasy film.  The expert use of the 120-piece Bratislava Symphony Orchestra combined with the perfectly implemented choral arrangements fusing the lines between haunting and majestic for countless signature moments in the game and the soundtrack.  Characters, locations, and even events like boss fights have their own arrangements and preferences to certain types of instruments.   The whole experience ranks right up there with any of the Lord of the Rings soundtracks.

For a game dealing with the horrors of vampires, werewolves, and other gothic elements the score remains surprisingly upbeat and even heroic, but it is not without a few dark moments that create more uncomfortable feelings of tension than true terror.  I was surprised that there were no hidden bars or callbacks to any of the previously released Castlevania themes.

It’s worth noting that this Ultimate Edition contains new and rearranged content from the original soundtrack that was packed in with the Collector’s Edition of the console game, but for those looking for the “ultimate” Ultimate Edition you’ll want to forego the physical copy of the soundtrack and head over to Sumthing Else Music Works where you can pick up the Director’s Cut version with 42 tracks, although many of the extra tracks are very brief.

For those looking to reminisce about their monster-slaying days after the adventure is over, you won’t find a better way to spark those memories and your imagination than the Castlevania: Lords of Shadow – Ultimate Edition Soundtrack.    It’s an epic piece of work that continues to blur the lines of video games and cinema.