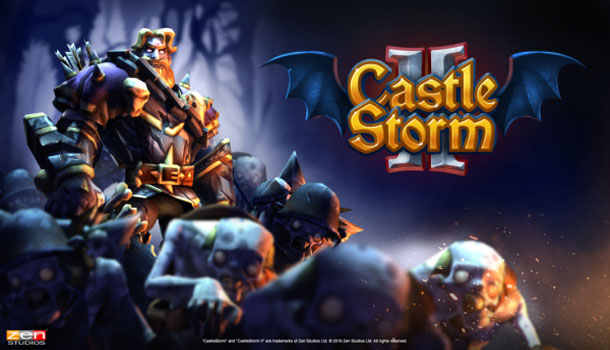 Zen Studios continues its biggest year in company history with the announcement of CastleStorm II, the sequel to gaming’s most charming mix of ballista-based castle-bashing, tower defense, and hack-n-slash ferocity. CastleStorm II doesn’t just enhance this lauded gameplay formula – its new randomly generated world map adds a considerable new focus on strategic conquest. Players can experience this ultimate multigenre mashup when it arrives to Nintendo Switch, PlayStation®4, Xbox One and the Epic Games store in late 2019.

With an elevated emphasis on storytelling, CastleStorm II returns us to a classic fantasy land of medieval madness, rife with heroic knights, enchanting sorceresses, glorious griffins and more. But a new threat rises – literally…as in, from the grave. Killer zombies. Headless horsemen. All-around nasty necromancy. You get the picture.

Each of six distinct campaign modes are represented by delightfully memorable heroic characters, as players strive to conquer an overworld map through a mix of turn-based strategy and skill in an upgraded take on traditional CastleStorm combat. They’ll build castles and fortresses – and eventually an entire empire – through gameplay structured to engage hardcore strategy fans while also proving accessible to a wide player base. And as the castles get bigger, they fall much, much harder – the destruction powered by the Unreal 4 engine enhances the visceral action.

“It would have been enough to just make more of the same – something over 2 million people have enjoyed playing over the past six years – but we just felt we had to do way more for CastleStorm II,” says Mel Kirk, Vice President of Publishing. “The ‘4X’ strategy element adds a whole new layer, and it could be a full game on its own, all while being every bit as accessible as the more traditional CastleStorm gameplay. And when you do add in that awesome genre-mashing gameplay that defined the first game – itself leveled up, and complemented by an even greater emphasis on story and character – CastleStorm II really becomes something unique and special. We can’t wait for everyone to start commanding and clobbering later this year.”