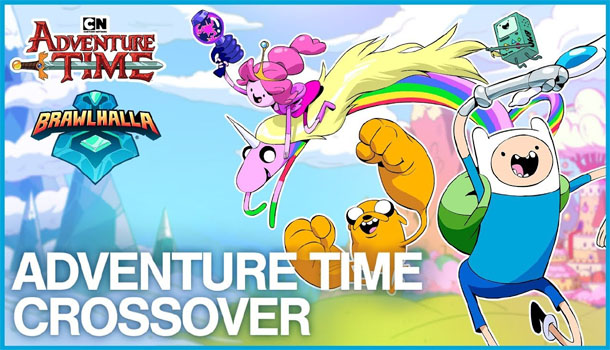 Algebraic, dude! Today, at the Electronic Entertainment Expo (E3), Ubisoft announced that Epic Crossovers for Finn the Human, Jake the Dog and Princess Bubblegum from Cartoon Network’s Adventure Time are available now in Brawlhalla. The free-to-play platform fighter game has more than 25 million players on PC and PlayStation®4 computer entertainment system, and is also available on the Xbox One family of devices including Xbox One X, and the Nintendo Switch™ system.

A special Adventure Time in-game event kicks off today through June 25 and will include the following brand new content.

The Adventure Time Epic Crossovers will turn frowns all around and continue to be offered in-store after the event, with Finn, Jake and Princess Bubblegum Epic Crossovers; all of this sweet, sweet crunkle can be purchased for 300 Mammoth coins each.

This time, there’s an “I” in the word “team”. In a special Adventure Time map, players are their own team by controlling two legends simultaneously, to defeat another player controlling two legends simultaneously. This new game mode will remain as a custom game mode after the event ends. It’s much more dangerous than you think!

Developed by Blue Mammoth, Brawlhalla is an epic free-to-play platform fighting game that brings players to the fight for glory in the halls of Valhalla. Choosing from over 40 unique characters, players can jump into single-player and co-op modes as well as online and local competitions. This year, the team has begun adding cross-platform play in phases, with players on Xbox One, Nintendo Switch and PC now able to matchmake together – for more details, please visit: http://www.brawlhalla.com/news