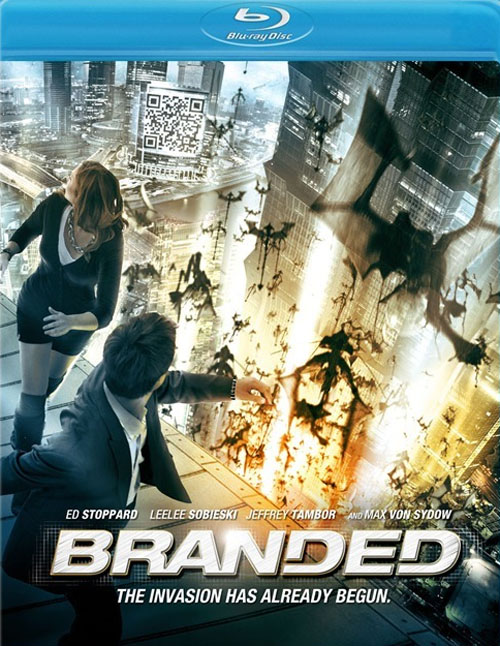 I was a big fan of the whole subliminal conspiracy in advertising back in the 80’s with secret messages of “SEX” airbrushed into magazine ads and mind-altering tracks playing beneath the mall music, so when Branded came up for review I was ready to reignite my passion with a 21st century twist. Sadly, what I ended up with was an indie movie flop that owes me 106 minutes of my life back – not including extras.

Written by Jamie Bradshaw and Alexander Doulerain, both advertising executive themselves, this movie paints a depressing picture of a dystopian society where consumers are merely sheep waiting to be shepherded by the mighty staff of advertising. The film follows Misha (Ed Stoppard) who we meet as a child in Moscow just as he gets struck by lightning. Whether this electric event triggers something down the road is never fully revealed. We jump ahead to Misha, as an adult, working for an advertising agency trying to make partner while keeping his relationship with the boss’ niece, Abby (Leelee Sobieski) a secret. Abby is working on a TV show called Extreme Cosmetic, essentially a Russian version of America’s reality show, The Swan from back in 2004. The concept is to take an attractive but overweight contestant and have her undergo cosmetic surgery to make her “beautiful”.

Meanwhile, on some secluded island lair, Max Von Sydow plays another marketing guru (seriously, that’s his credited name in the movie) who is working for the fast food industry. Apparently sales are down and he is tasked with making fast food cool again, so he plans to launch a campaign to make fat the new standard of beauty. We’re never quite clear if he sabotages Abby’s show, but their model falls into a coma after her final surgery forcing Abby to flee to the USA and Misha to seek refuge in the rural countryside where he becomes a shepherd. During his isolation he has a dream about having a dream that tells him what to do, and when he awakens he builds a wooden altar and sacrifices a red cow then burns it, collects the ashes and puts them in water and then bathes in it.

After this ritualistic cleansing Misha returns to Moscow to find the entire population to be extremely fat and proud of it, but even more disturbing, he can now see the brand influence on every person as this parasitic balloon animal that protrudes from the back of their neck. The more they consume the bigger this creature inflates until it detaches and floats into the sky to join and merge with the larger brand icons floating over the various city establishments. At first Misha thinks he is insane but once he comes to terms with his unique vision he learns to use it to give him the upper hand in advertising and to launch a quest to replace beef with a rival Japanese competitor who offers a healthier alternative.

Branded spirals out of control at this point, as we watch these giant balloon animals engage in a war of monsters over the city, not unlike a Godzilla movie if it were recreated using parade floats rendered with crude CGI. Sadly, only Misha and we, the audience, get to see this and react. When the movie was finally over I wasn’t sure what I had just watched or what I was supposed to take away from it. I realize this world is driven by consumerism, but I DVR 95% of what I watch on TV so I haven’t intentionally viewed a commercial in nearly a decade outside of the Super Bowl. The film is portrayed as a faux documentary, or at least narrated like one, but the whole thing just ends up feeling like a student film made by a bunch of stoned filmmakers who had the munchies.

Branded doesn’t gain any traction on the Blu-ray format, as this movie is just as enjoyable (or not) as it would be on Netflix or even standard definition. The 1080p transfer is shown in 2.40:1 with some unusually cropping at times to create a square-box format in the center of the screen. The color timing has been given a heavy dose of green and blue, which makes the whole thing feel monochromatic and surreal, much like The Matrix, but not nearly as cool. Contrast is all over the place and there are banding issues in nearly every scene or at least the transitions between scenes that are so bad it’s distracting. The CGI is laughably bad – even worse than the stuff we see on Saturday night on Syfy.

Branded offers up a DTS-HD MA 5.1 lossless mix that is the highlight of the experience, but even a quality mix can’t save this lemon. There is some spatial use of the surround channels and my subwoofer barked a few times, while dialogue was front and center and nicely balanced. The score fit the film and even added to it in some scenes, but was nothing memorable.

To cap off this boring and pointless feature film is an even worse commentary with Jamie Bradshaw and Alexander Doulerain. I went into this hoping to get some valuable insight into what I had just watched but instead these two are merely describing what I am watching as I watch it. I guess I shouldn’t be surprised that two people who can’t make a movie can’t talk about making one either. The only other extras on this disc are two Theatrical Trailers that, much like the deceptive box art, actually make this movie look like it has promise.

I can’t think of one redeeming moment or aspect of this film; not even as a conversational piece in advertising class or filmmaking school, with the exception of how not to make a movie or how not to abuse CGI. As I ejected the disc from my BD player I felt as lost as I could only imagine the filmmakers were when they thought this movie was a good idea. Don’t waste your time or money with Branded lest you become the very sheep this movie attempts to exploit.