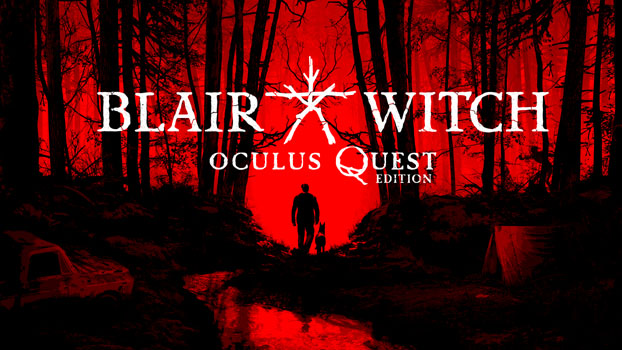 I remember when The Blair Witch Project came out in theaters in 1999. I remember the marketing campaign, leading up to the release, treating the movie as if it were a collection of found-videos put together revealing some horrific event that actually happened in the woods. I remember the feeling of unease and terror as the movie progressed, watching as the mystery of the Blair Witch slowly developed.

Something about the way that movie was told, with the “scary thing” never really being explained, really stuck with me. There was this sense of constant dread that permeated the movie. I can say, without a doubt, that the game does a fantastic job of putting that same sense of unrelenting, building terror into a video game. Playing in VR is altogether unnerving. They give you just enough of a life-line to allow you to keep convincing yourself that you’ll be alright, but creeping in the back of your mind, the whole time, is that little voice that keeps telling you that something…something is going to get you. You just don’t know what it will be, or how it will happen, or where it will come from. 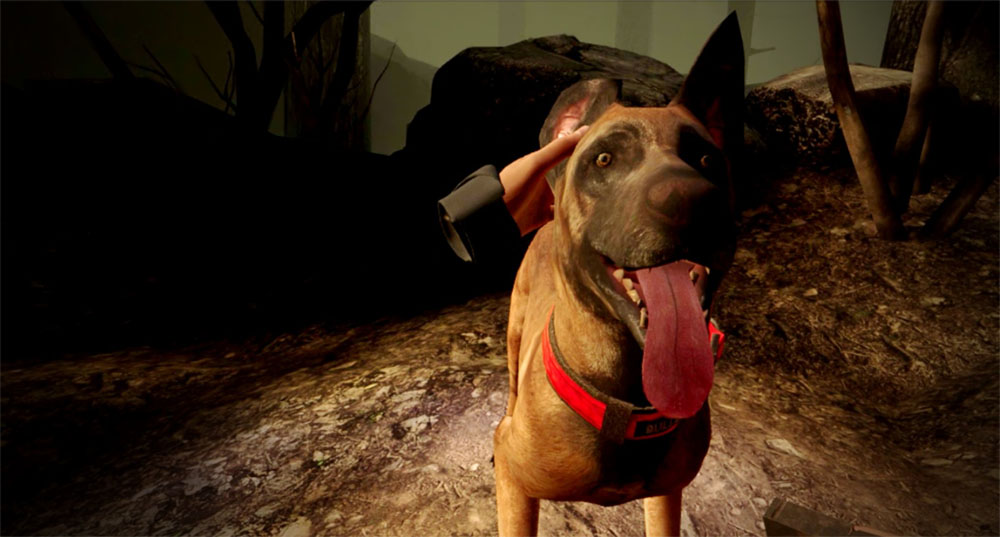 Bullet is one of your main lifelines. Bullet is an awesome German Shepherd that accompanies you. It is cool to have a dog companion that you can have scout ahead, fetch things for you, follow the scent of the missing child you’re looking for, or just sit next to you so you can pet him and feel better about your situation. It is cool to have that, but they also make it a necessity, in the game. The character you play as, Ellis, suffers from some pretty serious PTSD and Bullet is one of the only things that keeps him level. If Bullet strays too far away for too long, or you get separated from him, you will begin to have an episode. The world around you will begin to shift and trick you in different ways. There will be sounds from that traumatic incident that, when you start playing, you’re not quite sure exactly what it was. But as you play, you’ll begin to learn more and more about that incident, all while exploring the forest as a member of the local search party trying to find a missing boy.

Blair Witch is an exploration game where you’re constantly on the hunt for clues. The clues you find might be helping you figure out what happened to the missing boy, or they might be clues to a bigger mystery that you begin to uncover as you roam the woods alone (except for Bullet). The game fits well into the established lore of the Blair Witch from the movies, with hints toward some of those past incidents being interwoven into your current situation as well. 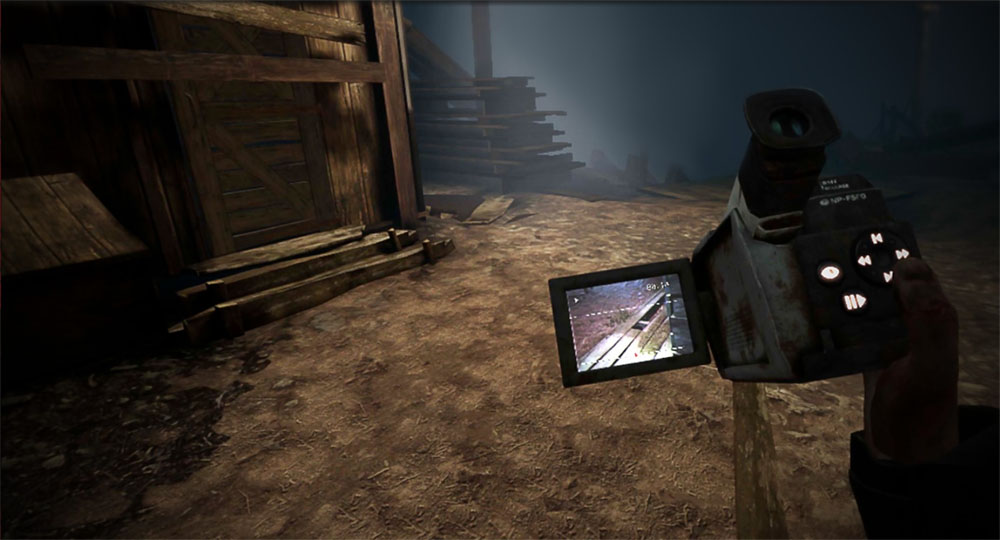 Overall, I think that the tone of the game was really well-executed. I was on edge the entire time I played constantly having to remind myself that it was just a game. Being in VR makes that immersion even more intense than if it were being played on a screen. It’s harder to disengage from it if it gets to be too much. One of the only things that detracted from that total immersion, for me, was the fact that the graphics had to be somewhat flattened and simplified in order to maintain the smoother performance needed on the Oculus system. I think that this downgrade in graphics is something that most Oculus users will just understand is part of the package. What the game lacks in visual detail, however, I think it tries to make up for in added immersion. You can pet Bullet or play fetch with him using sticks that you find laying around the woods. The sound effects are spot on, making you feel like the woods go on forever around you, with the constant, eerie sounds of nature happening all around you.

Bullet is your constant companion. Like I said, he’s the thing that keeps you tied to whatever sanity you have left. But, there are times that the AI that governs Bullet goes a little screwy. When I first saw him, he was running in place with his head and shoulders clipped through the back end of a police car. There are times that he will glide or slide along the ground unnaturally, or sprint ahead at an unrealistic speed, or walk “through” you, which is really a strange sensation when you’re in VR. It seems like a small gripe, but like I said, Bullet is often your main focus in the game, so when he acts unnaturally and it draws you out of that sense of being fully immersed in the horror of the world around you, making it feel artificial, it can take away from the overall mood. 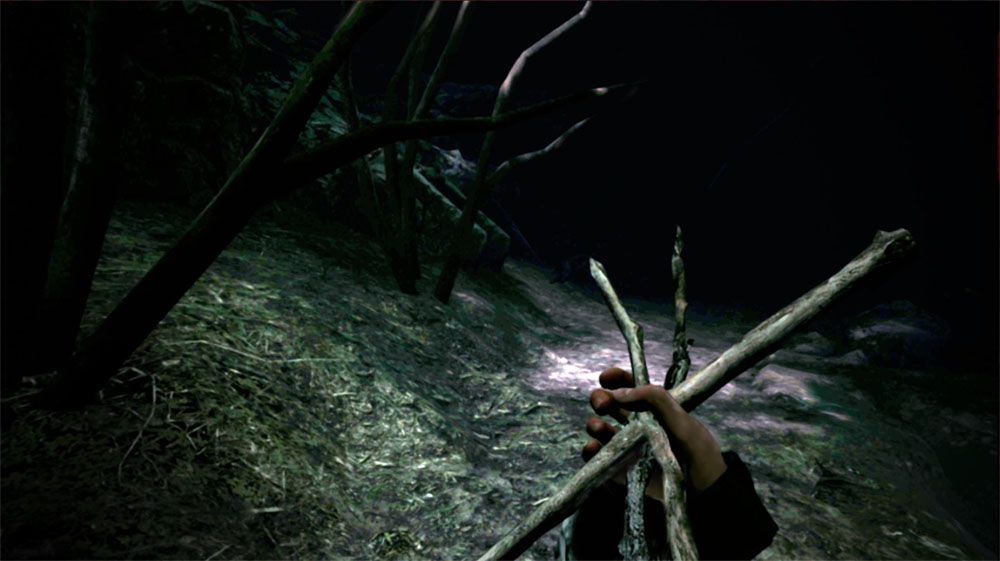 Ultimately, I think Blair Witch is a good horror game that seems to be suited really well to the VR environment. I can’t wait for the day that we don’t have to worry about graphical downgrades between versions, though, but right now I think it’s just a reality that VR users are going to have to accept as a tradeoff for the added level of immersion that you get for being able to be “in the game” versus playing it on the screen.

If you want to play a game that puts you in the forest where people have been disappearing for decades, with strange, eerie things happening all around you, or if you’re just a fan of the movies, I would recommend this game. 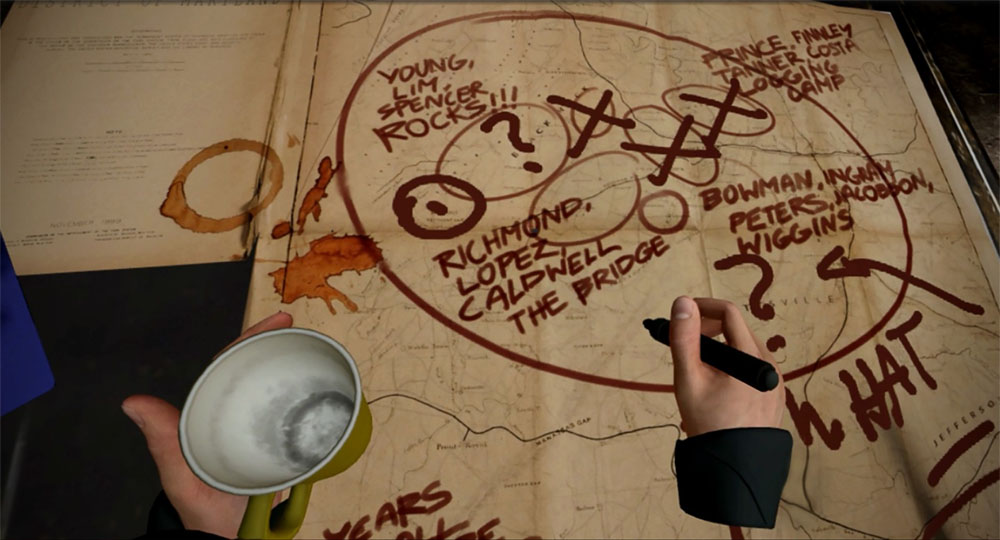