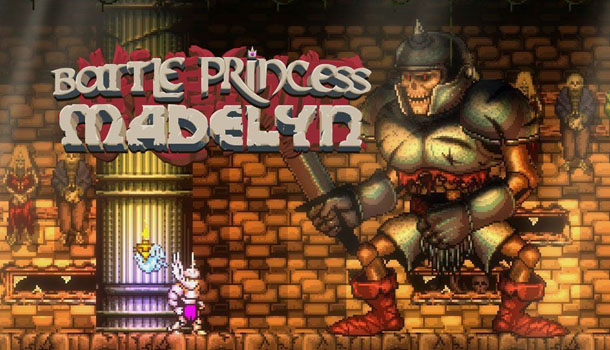 Causal Bit’s Battle Princess Madelyn has an heartwarming backstory: according to the game’s 2017 Kickstarter campaign, when the daughter of the company’s creative director Christopher Obritsch voiced her desire to be in Capcom’s Ghouls ’n Ghosts, the father decided to make a new game just like the 1988 classic, starring her as the titular character. He even made her honorary assistant creative director and consulted with her while designing the game. It really doesn’t get much cuter than that.

As a game co-designed with a kid, BPM is family-friendly, but its innocent charm belies an old-school level of difficulty that will likely try the patience of all but hardcore fans of the old-school platformer. I’ve never played the original Ghouls ‘n Ghosts that BPM emulates, but if it was as challenging as I’ve heard, BPM surely follows in its inspiration’s footsteps. 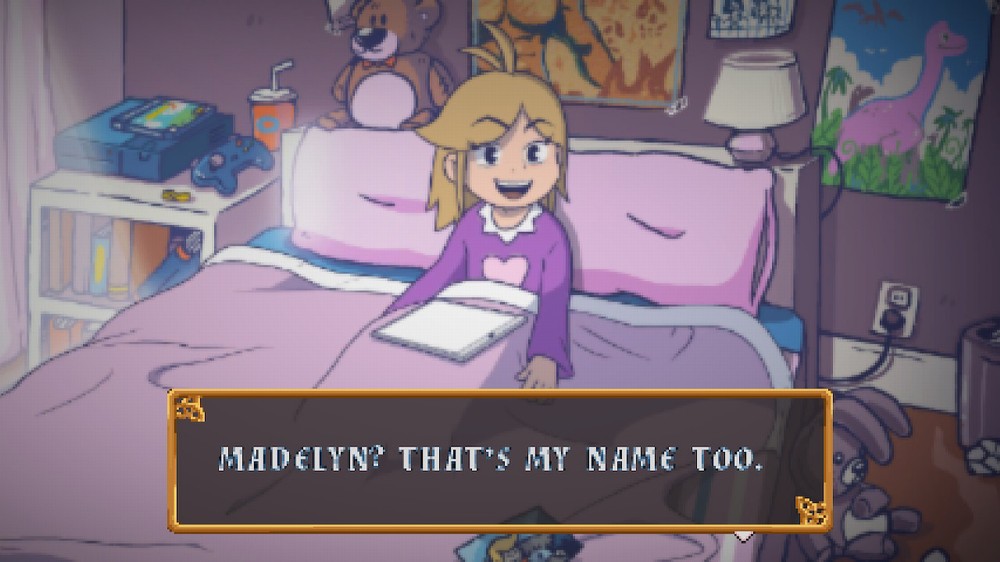 The controls may be simple – primarily involving jumping, climbing, and throwing a weapon horizontally, up, or down – but expect to hit the ground running. You can also expect to spam that weapon button like you would with a shooter. Your survival may depend on it.

BPM includes two styles of play: Arcade Mode and Story Mode. Story Mode includes some cartoon cut scenes to flesh out BPM’s simple story somewhat. Madelyn’s family, including her dog, are murdered by an evil wizard, and she’s off to do something about it. Story Mode includes some features not in Arcade Mode, such as currency and inventory systems for upgrading Madelyn’s armor and weapons over time, quests for various NPCs involving searching out and collecting hidden items or rescuing townsfolk, and the ability to warp to locations you’ve visited and explore the game world in a semi-open fashion. The playstyle is somewhat similar to the Metroidvania games, as Madelyn must find certain items, such as double-jump boots, to access some areas, and finding secret areas is a large part of the game. In this mode, you’ll restart at a checkpoint if Madelyn dies, usually at the beginning of the area you’re in (such as a dungeon or boss door), but you won’t need to restart the entire level. 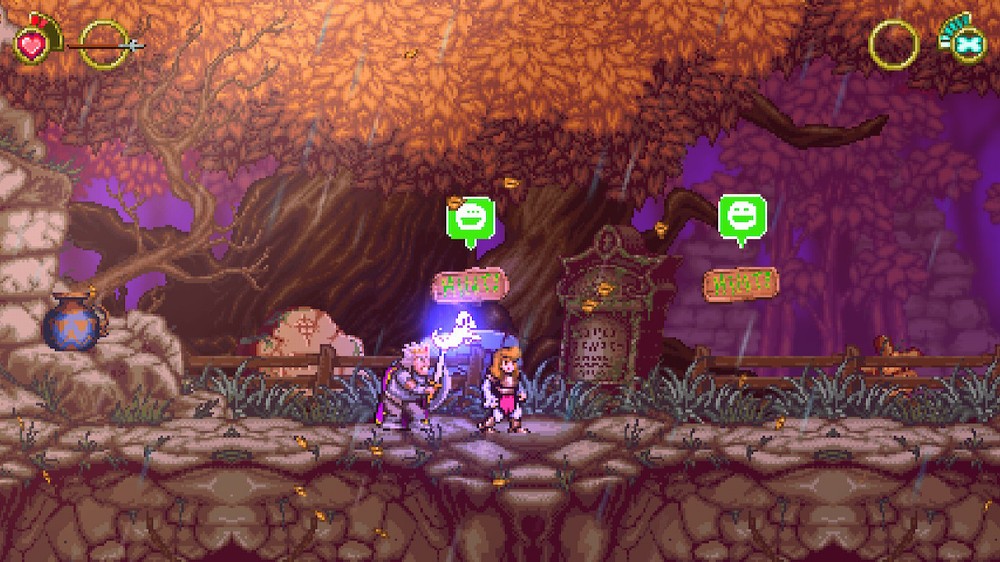 Arcade Mode is exactly what it sounds like: it foregoes the story elements of the game and condenses the introductory cut scenes from Story Mode into a brief explanatory pixel-art animation before launching Madelyn directly into arcade-style action. You can still collect coins for points, but there are no quests or inventory. You start off with the double-jump boots and collect power-ups as you play, and in true arcade style, if you die, you restart at the beginning of the level, even if you die during the boss fight at the end.

BPM’s system for handling lives is innovative and one rare feature that’s more forgiving than classic games. It’s also representative of the game’s overall tough-but-fair approach. Throughout the game, Madelyn is accompanied by the ghost of her late dog, Fritzy. Fritzy primarily helps Madelyn by bringing her back to life when she falls in battle – but only if he has enough magic, which is gathered by absorbing defeated enemies. His magic bar can revive Madelyn roughly three times when it’s full, a standard old-school life allowance. This means that Madelyn can theoretically keep going as long as she defeats enough enemies. For much of the game, this is doable, since you rarely get a few seconds of peace with the rapid respawn rate. Recovering magic is less likely during boss fights in Arcade Mode, though. For instance, the Arcade Mode first boss is differently designed from the Story Mode version to give you trash mobs that could possibly refill Fritzy’s energy bar, but I found if I was having a tough time with the boss, benefiting from the revival system was also unlikely. 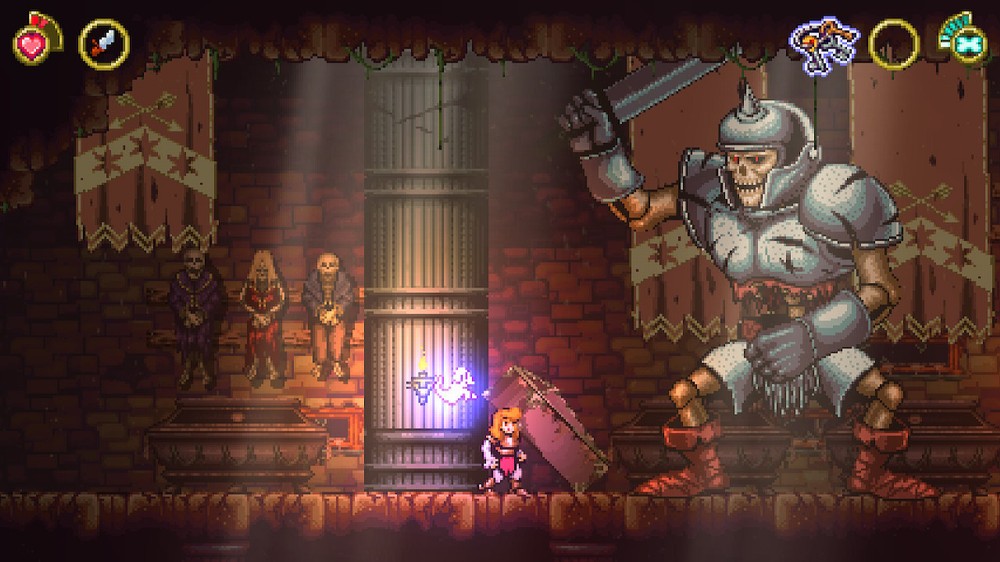 Later on in Story Mode (or from the start in Arcade mode), Fritzy can also help Madelyn by attacking enemies; however, this draws from the same pool of magic that resurrects Madelyn when she dies. This may just be a limitation of my current skill level, but, as a result, I didn’t use these powers much because I was too concerned with survival, especially since dying can set you back considerably.

BPM’s main weakness is probably also something that the hardcore set would see as a point of attraction: it’s old-school to a fault. When I first started playing the game for this review, prior to its launch-day patch, it was like the Wild West. No instructions, no handholding, nada. As with old classics, after you play for a while, you’re bound to hit an obstacle, such as a platform obviously unreachable without a double-jump or a waterfall blocking your path. The game prior to patching gave next to no clues as to where a player could find the necessary upgrade or what action to perform in order to continue. Everything was time-consuming trial by error and random exploration, and while I fondly remember the exquisite frustration and satisfaction of discovery playing similar classic games in my childhood, I no longer have that kind of luxury of time. I was ready to put the controller down after some hours stuck at the same impeding waterfall, which you don’t even reach until the end of a rather trying sequence of jumping and climbing across a chasm while surviving a gauntlet of skeleton archers and fire-breathing snakes. 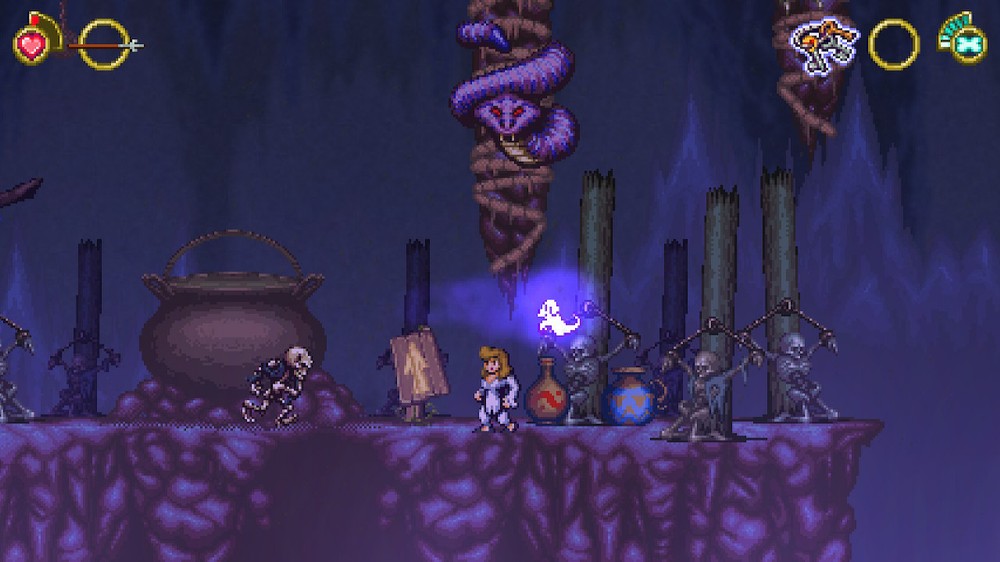 Apparently it was a common complaint, though, because the official release now includes newly added hint signs and NPCs (including one rather unceremoniously pointing out the exact location of the aforementioned double-jump boots, which initially took me hours to accidentally discover). These hints are almost obnoxiously in-your-face, though, and I honestly can’t tell if the designers are passive aggressively throwing shade. I’m not sure why the hints aren’t integrated more gracefully (say, with an NPC mentioning a landmark that could be easily recognized by the player), but with leisure time being such a precious commodity in my adult life, I suppose I’d take “HEY, DUMMY, THE BOOTS ARE RIGHT HERE!” over wasting another few hours wandering aimlessly around two levels and trying every floor and wall, trying to figure out what the heck I missed.

The patch also added a feature where a skeletal hand appears when Madelyn is close to a hidden item to point you toward it. This is mildly helpful, but not always. It doesn’t always point to something you can actually reach at that moment, and you’re not able to select the objective you’re searching for. 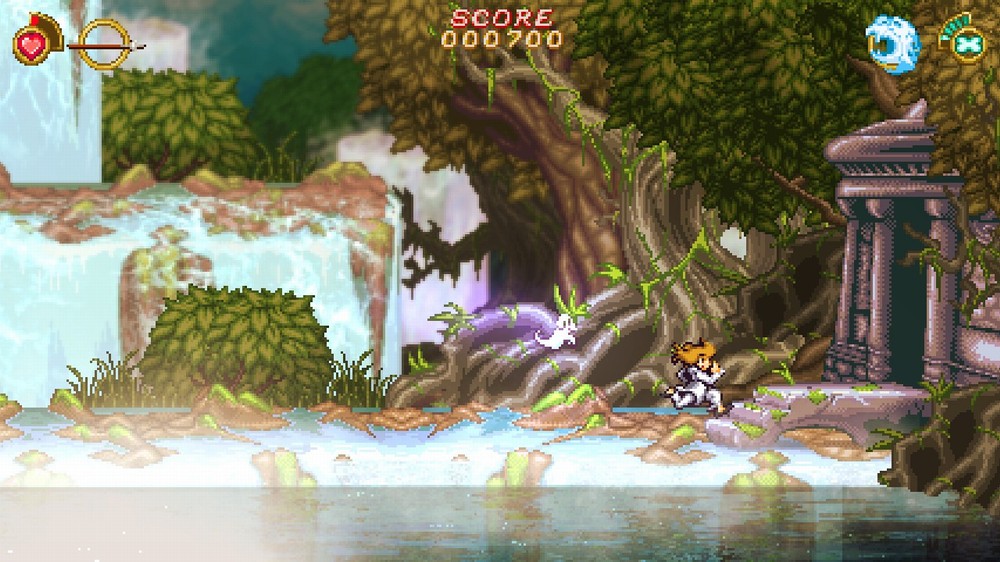 Of course, you can bypass all this by playing Arcade Mode and skipping the Story Mode, and for that reason, I’d recommend Arcade Mode out of the two. Though you won’t experience Madelyn’s story, it’s more streamlined and hits all BPM’s gameplay high points while avoiding the frustrations and time-wasting pitfalls of Story Mode. I love RPGs, so that’s saying something. If you’ve got the time and don’t mind repetitive backtracking and at times wandering around aimlessly, though, Story Mode’s levels are pretty different from Arcade Mode’s, so they’d both be worth playing.

In short, BPM is unapologetically difficult, and unless you’ve got well honed platforming skills and reflexes, you can expect to spend a lot of time dying and practicing the same area numerous times before you can survive it. In Story Mode, even with the added hints, there’s no quest log, map, or other system for tracking what you’re doing, so you can expect a lot of backtracking and time spent on wandering around and looking for whatever you’re expected to do next. Combined with the game’s overall difficulty level, gamers less dedicated to this level of challenge may be discouraged from continuing after a certain point. That said, other than a few areas where Madelyn respawned somewhere she’d get immediately killed again (possibly fixed in the release-day patch), annoying blind leaps of faith, and cheap enemy placement, BPM is a generally fair game that you can certainly practice and get better at over time. 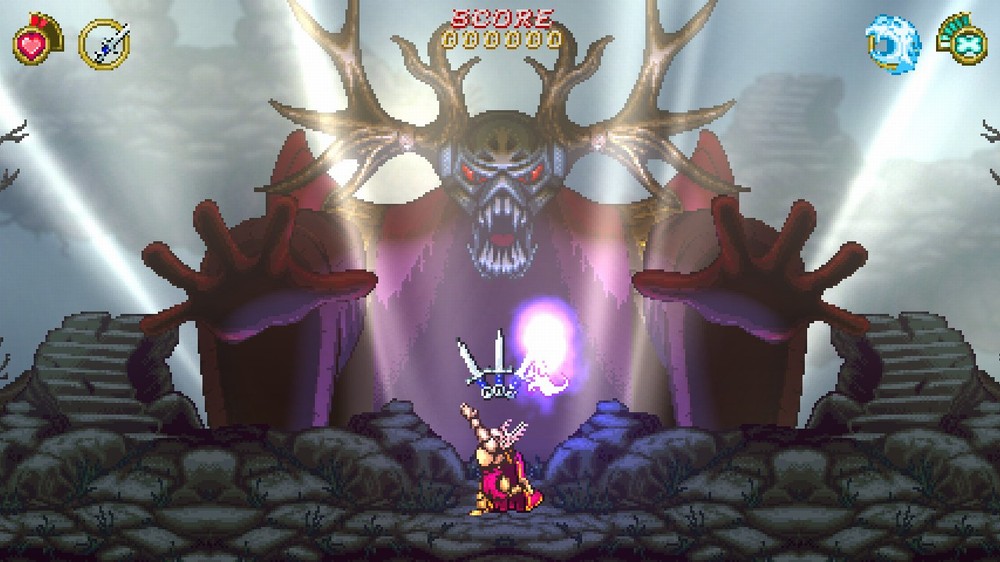 As for the game’s presentation, the soundtrack, which can be played in either a more retro-sounding chiptune version or a more modern-sounding MIDI “Orchestral” version, is pretty excellent and certainly evokes a warm 80s and 90s nostalgia. The visuals I have more mixed feelings on. The in-game pixel graphics are detailed and beautifully rendered, slightly dopey running animations and all. The enemies are sometimes harder to see against the backdrops than necessary, however, and even overlooking somewhat frequent typos, the text is unfortunately atrociously blurry-looking and difficult to read, whether the Switch is in TV mode or portable mode. While I respect the desire to maintain that old-school pixelated look, a more legible font or maybe eliminating the anti-aliasing could have saved me some eye strain. The cut scenes would have probably looked better at a crisp, modern resolution, too. As is, it’s obvious they were downsized to a low resolution from high-resolution drawings, rather than originally rendered in pixels, and they look low-res and blurry, rather than charmingly retro. That said, these are just superficial criticisms and didn’t detract significantly from my enjoyment of the game.

Would I recommend Battle Princess Madelyn? I suppose that depends. If you enjoy classic games from the 80s, punishing difficulty and minimal direction and all, by all means, you’ll probably love this one. If, on the other hand, you’re not the best at platformers and don’t have a whole lot of time on your hands to try and try again, you may want to consider a more accessible option. I’m probably in the middle of the road, and I still enjoyed the game with its rough edges, so it’s worth considering if you’ve got interest in similar games.