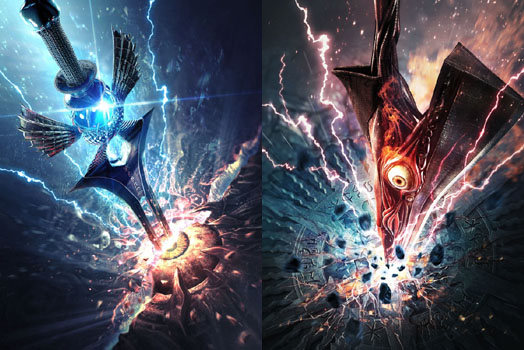 The SOULCALIBUR franchise has been home to a myriad of characters whose variety of colorful backgrounds rival that of their dazzling weapons. It’s not often that an entirely new warrior joins the stage of history, but today, we’re excited to announce that such a rare occurrence is taking place in the SOULCALIBUR VI world. Azwel, born in the Holy Roman Empire, member of the Aval Organization, and wielder of a mysterious weapon called the Palindrome, presents a truly unique foundation for a fighting game character… even for SOULCALIBUR standards.

Blessed with uncanny intelligence and an undying love for humanity, Azwel has researched and studied human history, medicine, war, and art. His journey has led him to conclude that he must assist humanity in overcoming its impending doom. Wielding his Palindrome, a weapon which processes fragments of both the cursed and spirit swords, Azwel can conjure double swords, a giant axe, or a spear & shield, out of thin air during battle. This makes him a formidable opponent as each of his weapon sets present different offensive and defensive tactics for players to use or overcome.

SOULCALIBUR VI is quickly approaching its October 19, 2018 launch date in the Americas for the PlayStation®4, Xbox One, and PCs via STEAM®