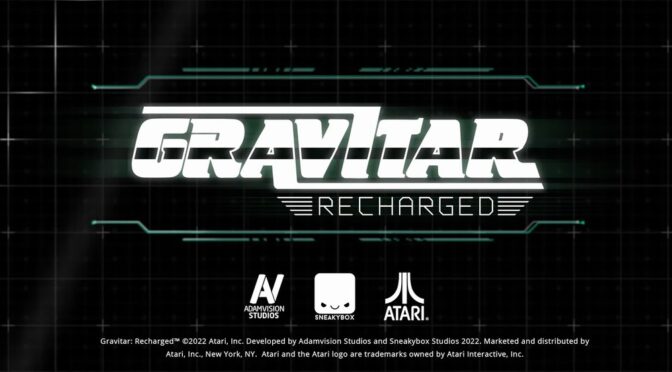 Atari invites you to revisit (or experience for the first time) the golden age of gaming through the retro reimagining Gravitar: Recharged, coming to all platforms on June 2, 2022.

You’re again transported to the golden age of gaming in Atari’s sixth installment in the popular Atari Recharged series. This time, you’re a fearless ship captain tasked with exploring galaxies far off in the depths of outer space with the option of enlisting a co-pilot via local co-op! Blast off with all-new power-ups, special abilities, and more all against beautifully detailed spacey environments and backdrops, to the beat of a fresh original soundtrack by award-winning recording artist Megan McDuffee.

🚀  Take on 24 distinct missions, aiming to climb global leaderboards and assert yourself as the ultimate space adventurer, or connect your player two and strategize together

💥  Utilizing the tech at your disposal, make use of your tractor beam to grab power-ups including homing missiles and electrifying EMP disruptors

Gravitar: Recharged is coming to a platform near you — Nintendo Switch, Windows PC via Steam and Epic, PlayStation 5, PlayStation 5, Xbox One, Xbox Series X|S, Atari VCS, and iOS and Android mobile devices.