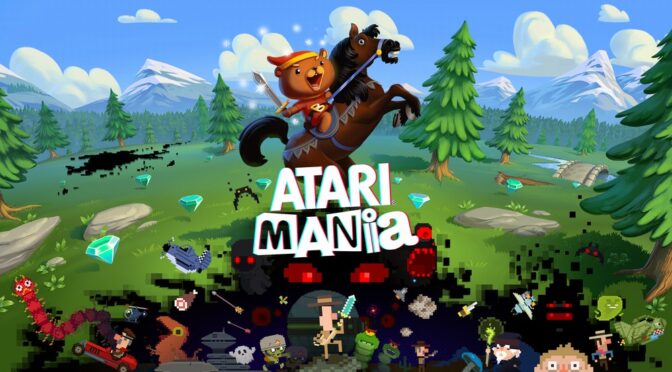 Atari® — one of the world’s most iconic consumer brands and interactive entertainment producers — is thrilled to reveal today its brand new microgame title, Atari Mania. Coming later this year to Atari VCS, Nintendo Switch, and PC, Atari Mania features a robust storyline told through a selection of 150 microgames, each incorporating beloved Atari classics from the 1970s and ‘80s golden era of gaming.

“As we celebrate Atari’s 50th Anniversary, Atari Mania gives fans a way to re-engage with their favorite Atari games and characters, while also introducing a new generation to the games that launched the industry,” said Atari CEO Wade Rosen. “Atari Mania takes the elements of an Atari classic — incredibly fun, fast-twitch gameplay — and mixes them with the self-referential humor and over-the-top joy of a company celebrating five decades of amazing experiences.”

In Atari Mania, you’ll step into the shoes of “Caretaker of the Atari Vault,” tasked with watching over the storehouse of retro-tastic Atari games. One night, a dead pixel appears, and then soon enough, all heck breaks loose! As you journey through the Vault, you find that familiar and beloved games have begun to warp, mutate, and meld into a series of increasingly wild challenges.

With over 150 lightning-fast microgames to master, you will have to beat killer combinations of well-known Atari properties, solve puzzles, complete challenges, and beat the clock, all with fun Atari easter eggs to uncover along the way. As you advance, you will complete runs of increasingly difficult microgames in randomly generated order, before facing a series of epic boss battles.

Key Features of Atari Mania Include:

Developed by Montreal-based game design studio Illogika, Atari Mania will release on Atari VCS, Nintendo Switch, and PC later this year. The game will be available for purchase for $19.99 USD on all platforms.