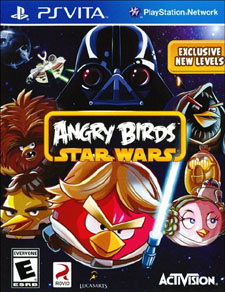 Who would have thought that a little 3-person game development company from Espoo, Finland would change the world of casual gaming forever?  Well, that’s just what the folks at Rovio did in 2009 with their release of the now-classic Angry Birds on Android and iOS.  That original release, which took the simple premise of flinging birds at a series of increasingly fortified structures in an effort to destroy the evil pigs housed inside, took the smartphone world by storm and all-but created a new genre of gaming coined “physics games”.

The series has since spun off into a number of themed sequels, ranging from holiday themes (Seasons), science themes (Space – a collaboration with NASA), and finally – movie themes (2011’s collaboration with 20th Century Fox for their film Rio, and of course, the current collaboration with LucasArts for Star Wars).  Few games of this nature have captured gamers hearts like Angry Birds, the proof of which can be seen at the local department store with the endless merchandising of Angry Birds t-shirts, Halloween costumes, plush toys, board games, computer accessories, even housewares and get this – Angry Birds baby wipes.

Arguably the most important factor in Rovio’s success with Angry Birds in the smartphone circles, aside from the amazingly accessible and addictive gameplay, has been the series’ attractive price point; the games are typically given away free with in-game advertisements, or sold for $1 to $3 for ad-free versions.  Just to put this in perspective: Android/iOS users can currently purchase an ad-free download of every Angry Birds title ever made for their system (currently six titles) plus the spin off Bad Piggies, and the grand total would come to right around $10.  It is this grand total cost is precisely what makes writing a completely objective review of Angry Birds Star Wars for the PS Vita so difficult. 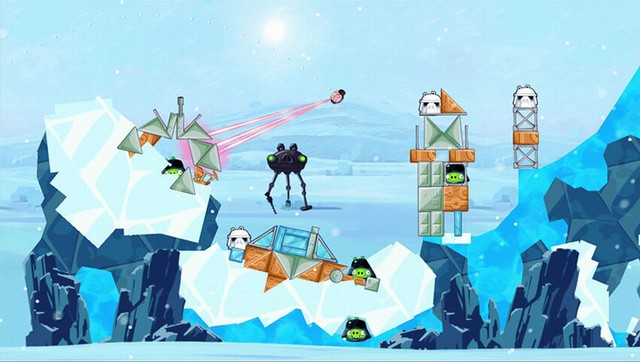 On one hand, you have what is arguably the best spin-off of the Angry Birds franchise with Star Wars, into which Rovio and Activision have injected 20 new never-before-played levels, two new multiplayer modes (a two-player co-op mode and a four-player competitive mode),  all with online leaderboards and Trophy support.  But on the other hand, you have Angry Birds Star Wars – a title that originally released in November of 2012 and one that already has a 2013 follow-up Star Was II on Android and iOS, both of which currently sell for $0.99 on their respective platforms – with PS Vita-friendly modifications and a handful of additional levels and modes, but also with a staggering $40 price tag. Can you see my dilemma here?

Regardless of the cost, you won’t find a better Angry Birds title than Star Wars – especially for the Star Wars fans out there.  By merging the two properties together, Rovio, Activision and LucasArts have definitely succeeded in delivering a top-notch Angry Birds experience with Star Wars. With trademark ‘Bird’ representations of Luke Skywalker (Red Skywalker), Hans Solo (Chuck “Ham” Solo), Chewbacca, and fan-favorite Boba Fett, all of whom are pitted up against ‘Pig’ versions of Storm Troopers and Darth Vader – Angry Birds Star Wars is an homage to both the films and the fans with its countless in-jokes, familiar locations, and nostalgic sound effects.

With well over 2 billion Angry Birds downloads across all platforms, I probably do not need to go into too much detail regarding the gameplay mechanics of Angry Birds.  But for the sake of the handful of gamers living in some remote area without access civilization, here goes: 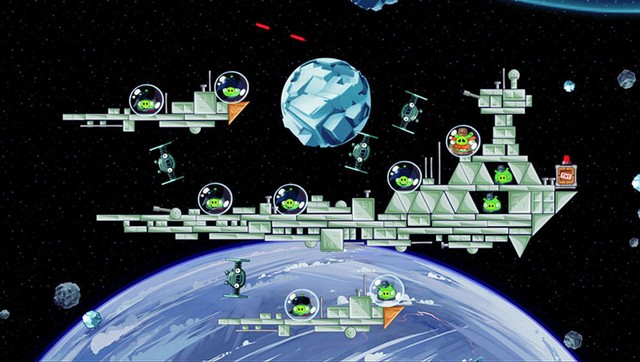 In Angry Birds, the gamer is presented with a structure that houses a certain number of pigs, who are the bad guys.  The structure is fully-destructible, but it is made up of a variety of materials (wood, metal, glass), each of which has different strengths and weaknesses.  The gamer is also presented with a slingshot and an array of birds which can be flung at different trajectories to hit the structures and try to make them tumble onto the pigs.  The birds are color-coded corresponding to different powers that make them more or less effective against certain building materials, or that give them ranged attacks (bombs, etc.).

As mentioned earlier, Angry Birds Star Wars puts a LucasArts twist on the action with Star Wars-inspired characters that sport ranged attacks in the form of Star Wars laser blasters, light sabers, and Jedi force attacks featured from the film.  Like the original series, each attack is more or less effective against the various building materials used, as well as the different gravitational forces presented by the game and films’ outer-space setting.

These gravitational differences play a major role in the gameplay with some spherical world requiring unique physics to fling bids at and around the planets to get at structures that cannot be accessed by traditional trajectories.  The result is a game that is every bit as dependent on skill as it is on luck – and one that is as frustrating as it is rewarding. The gameplay has been enhanced to work with the various interface options posed by the PS Vita- gamers can choose to use the traditional smartphone-based touch-screen control, the PS Vita’s back-side touchpad control, or analog stick control (my personal favorite).  Sadly, while any of these methods can be used at any given time without having to pause to the Options menu, gamers will find that each control option is mutually exclusive of the other – this means that gamers can easily jump from touch screen controls to touch pad controls on the fly, but for some odd reason the game cannot mix-and-match specific control components or it will simply sit idle. 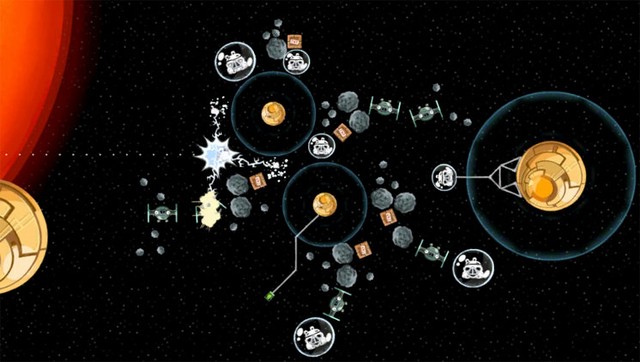 It took me some to realize that in trying to support the Vita, my middle fingers were barely touching the touch pad which was rendering both the analog and touch screen controls ineffective.  The ability to customize and mix-and match controls would have been a definite improvement, especially in cases of ranged attacks where the precision of trajectory afforded by the analog stick is offset by the awkward analog targeting system which is better served by the touch screen.

I have no faults with the presentation, which as I mentioned earlier really delivers a fantastic Star Wars experience.  There is absolutely no guessing involved in figuring out which characters are being represented in the game, and as mentioned earlier the iconic sound effects are nostalgic enough to make even the most cynical Star Wars fan smile.

In closing, Angry Birds Star Wars is a fantastic addition to the series and probably the best casual game on the market.  But that being said, it is already  a year-old game that originally sold for $1, and even the modes upgrades and multiplayer modes hardly make up for the seemingly astronomical $40 price tag – especially when iOS and Android users are already experiencing Angry Birds Star Wars II.

Save your money on this Vita release, and get the collection on a tablet instead – or play it for free on the PC. 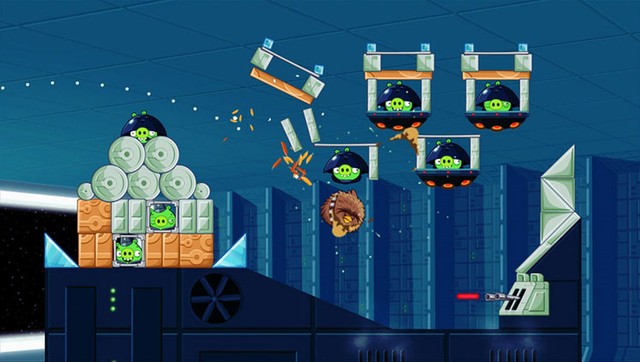 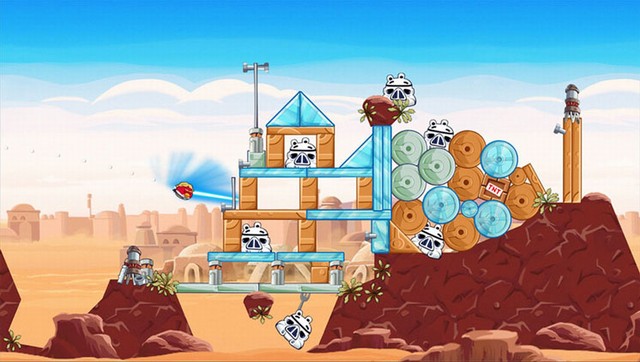 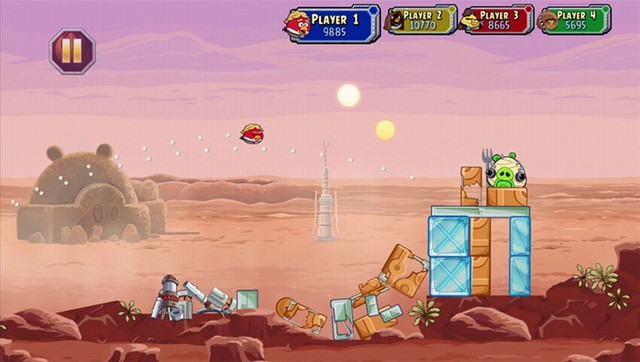 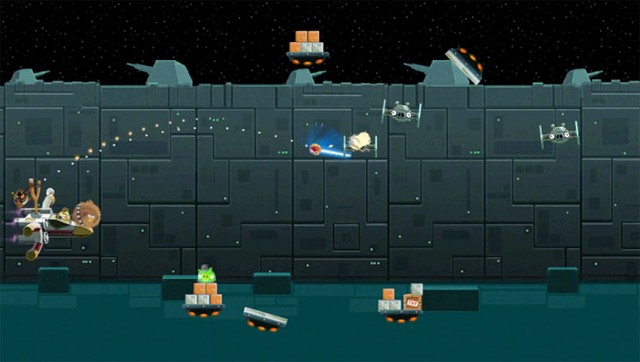