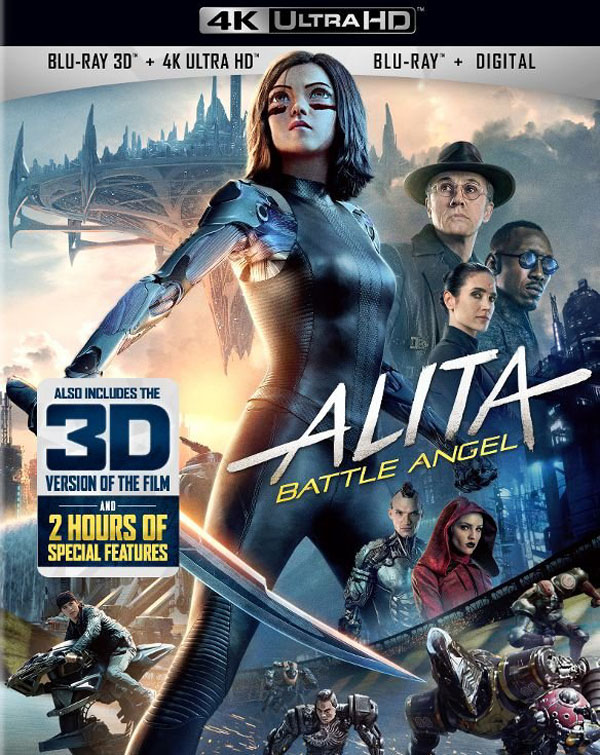 Even as I was leaving the theater I knew that Alita: Battle Angel was going to be one of my favorite home video releases of 2019, and I was already resigning myself to the fact that I would have to double-dip for both the 3D and the 4K releases. Thankfully (and wisely), 26th Century Fox made the smart decision to bundle the two formats together. After all, there is no bigger supporter of the 3D format than James Cameron, although his motivation for 3D is to get people back into the theaters to see movies rather than staying home to wait for their inevitable release on disc – a smart tactic given the fact that with the proliferation of 4K screens 3D support is all but non-existent. My 4K Sony is one of the last models to even support 3D, but rest assured, if you have a 3D-capable TV this is definitely the format you’ll want to watch.

Alita: Battle Angel is the perfect storm of filmmaking; a movie born from James Cameron’s love of the original manga that led to his 180-page script nearly 20 years ago. But given his obligation to the Avatar franchise this was a movie that was likely to never be made until Robert Rodriguez came on as director. He promptly condensed the script to a manageable 130 pages and set off to create the opus we are privileged to view today. Combining some veteran acting talent along with the latest in motion-capture and performance-capture technology to create a totally believable CG heroine, Alita will grab you from the opening frame and won’t let go until the credits start to roll. The storytelling and pacing are outstanding; leaving me to wonder what was in those 50 pages that got cut. I guess I’ll have to read the manga to find out.

Alita takes place in the 26th century after The Fall, a major conflict between Earth and Mars that has left the world to thrive in a bustling metropolis that exists under the shadow of Zalem, the last floating city. In this class-based society the untouchably affluent live in Zalem while those below in Iron City work in the factories, producing goods for those above who respond by dumping their waste into a massive landfill. The movie opens with Dr. Dyson Ido (Christoph Waltz) sifting through these mountains of waste looking for anything he can use in his cyborg repair business. Yes, human modifications and cybernetic implants are a normal part of existence in Iron City, which plays heavily into the story. Buried in the trash, Ido discovers the partial head and upper body of a female cyborg with an active human brain and an anti-matter heart built on forgotten technology from three centuries past. Ido takes her home and combines her with the cyborg body originally built for his crippled daughter, Alita whose name he bestows upon her.

Thus begins a totally compelling character arc for Alita, a CG character that is just as believable as any of her human co-stars thanks to the flawless casting and performance of Rosa Salazar. Once you get past the 125% scaled eyes you will quickly forget Alita is anything less than a real person. The performance capture is flawless down to 3mm, and you can even watch Rosa’s original performance with the suit and headgear in the bonus materials and her expressions and emotions transition to the digital world with nothing lost in translation. We watch Alita grow from a wide-eyed innocent girl to a semi-rebellious teenager and eventually into a powerful URM Berserker warrior, a forgotten remnant from an ancient war, or as she puts it, “Just a girl who got tossed out with the trash.”

There are some exciting subplots that swirl around our hero. Motorball is a sport that consumes the population of Iron City and is run by Vector (Mahershala Ali) who reports directly to Nova (Edward Norton) up in Zalem.   Dr. Chiren (Jennifer Connelly), Dr. Ido’s ex-wife, separated after the death of their daughter, has joined with Vector to create the perfect Motorball cyber-athlete in hopes of a free pass back to Zalem. These characters along with a few cybernetic thugs will provide much of the conflict for Alita who is just trying to find love with Hugo (Keean Johnson), a seemingly charming young man by day and an agent of Vector by night who jacks cyborgs for their parts. He too strives to reach Zalem if he can only earn a million dollars on the black market. Even Dr. Ido has his secrets when Alita learns he is a Hunter-Warrior, a bounty hunter by night making some extra cash while working out his own personal demons surrounding his daughter’s death at the hand of one of his patients.

Alita comes to life with a style and art design reminiscent of other futuristic films but ultimately something wholly original. There are some amazing set pieces, especially when the camera pulls back to reveal wide shots of the city with Zalem floating above, or the hydro wall, or these giant machines harvesting crops outside the city. There is this cool mix of futuristic architecture built over layers of the past, as evident when Hugo takes Alita to his favorite spot in the city. The attention to design even goes down to the character level with the intricate porcelain doll textures of Alita’s first body to her final nano-suit. The supporting cast of characters, mostly villainous cyborgs, are all equally engaging with fantastic designs that will have you re-watching the alley fight and the Kansas bar fight multiple times.

I can count the number of 4K/3D combo releases on one hand, so I was pleased when I learned this 4K release came with the 3D Blu-ray in the box. What I was not prepared for was just how much better the Blu-ray version of this movie was versus the 4K version, both 3D and 2D. Cameron is the master of 3D and Alita does not disappoint with a perpetual level of depth to every scene. There are really only two or three moments of “in your face” 3D, and with the exception of some blurry moments during the fast-moving Motorball segments the 3D image is brighter, more colorful, and sharper than the 4K disc found in the same box.

I actually watched the 4K version first; my first viewing since seeing the film in 3D IMAX, and instantly I knew something was off. It was like the entire image had been softened and the color-timing had desaturated the image making it dull and lifeless. Admittedly, the 4K resolution did offer an extra level of texture detail in both live action and the integrated CG elements, but often this added sharpness also created a level of disconnect between the two formats. Rather than making the CG look photo-real this enhanced resolution actually made the live action components look animated. Rather than sitting back and enjoying the story I was constantly trying to shake that uncanny valley feeling. Even the HDR didn’t seem to be doing much in this version, with only minor tweaks to some color tones you would never notice except in side-by-side comparisons. Inserting the 3D Blu-ray was like returning to the IMAX. The image was brighter and more colorful and the 3D image just popped with clarity and immersive depth. This was truly how Alita: Battle Angel was meant to be watched.

While the Blu-ray versions of Alita may offer a superior visual images there is a disappointing lack of a Dolby Atmos track. Rest assured, the DTS-HD Master Audio 7.1 track found on the Blu-ray is perfection for what it is, but the Atmos track, found only on the 4K disc, is even better. There are so many scenes that benefit from the added verticality of the sound design from the opening moment of the film where trash seems to be falling from your ceiling to the Motorball events and even the fight sequences that make use of every speaker in your home theater setup. The LFE is powerful. There is one scene where Alita punches the street and it shook my entire room. The sound mix is excellent for the most part, but both of the Motorball sequences and the bar fight shot up significantly in volume to near-uncomfortable levels.

Fox is going to make sure you use all three of those discs in the box by putting all of the bonus materials on the standard Blu-ray disc only. And while there is no commentary track there are more than two hours of extras that proved to be some of the best bonus material I’ve experienced on any home release this year. Alita’s World is a four-part animated feature that gives added depth and background information to a world we desperately want to know better. You’ll learn about The Fall, Iron City, What it Means to be a Cyborg, and the Rules of the Game that breaks down Motorball. From Manga to Screen is a 20-minute look at how James Cameron adapted the original Manga into a feature film. Evolution of Alita is a 20-minute look at the character of Alita and her transformation from the page to the big screen including some impressive training for Rosa. Motorball is a 6-minute look into this NASCAR/roller derby hybrid that could easily be turned into a video game.

Moving on we have the London Screening Q&A with James Cameron, Robert Rodriguez, Rosa Salazar, Christoph Waltz and Jennifer Connelly. Those with a sweet tooth will enjoy 10 Minute Cooking School: Chocolate where Robert Rodriguez shares his secrets for making the perfect chocolate treats. The final two extras are my favorites. The first is 2005 Art Compilation that tells a shortened version of the movie with narration overlaid on original production artwork – simply stunning. The final feature is Scene Deconstruction where you can view four scenes from the movie in three stages of production by using the color buttons on your remote. You can watch these select scenes in their original format with Rosa in her motion-capture outfit or switch to animation that replaces Rosa with Alita in rough form or switch to final render with all the fancy effects. Just seeing the live action of Rosa was the best part of this feature.

Ironically, I don’t tend to watch anything on Blu-ray that’s also available in 4K, and I almost never go out of my way to seek out 3D versions of films. Thankfully, Fox saved me from myself with Alita: Battle Angel as both the 2D and 3D versions of this film appear to offer the preferred viewing experience. Yes, you’ll lose the Atmos support, but the added color and vibrancy does the best job of matching the theater experience, and if you have a 3D TV then prepare to transform from a viewer to a participant in one of the best 3D films since Avatar. This is easily one of my top picks for 2019 and one of my top ten films of all-time. Highly recommended.