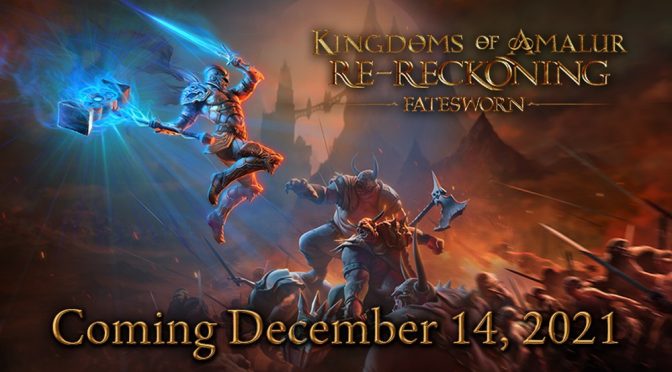 Almost 10 years ago, a legendary RPG was born: Kingdoms of Amalur: Reckoning. This year on December 14th, the journey of the Fateless One continues. After the Crystal War has been fought and Gadlow has been defeated, the people of Amalur were hoping for peace to return to their lands. And although peace has indeed come to Amalur, rumors of a new threat are starting to spread, rising in the far west, the icy lands of Mithros. None other than Telogrus, the God of Chaos himself has awoken and is gathering followers to throw the whole world into chaos!

The upcoming expansion Fatesworn offers a brand new storyline, a new environment, various new quests and missions, new Chaos Realm dungeons all over Amalur, a new gameplay mechanic, new weapons and armor, new enemies, and much more. It will raise the level cap to 50, and even features a new soundtrack by famous composer Grant Kirkhope. Fatesworn requires the base game Kingdoms of Amalur: Re-Reckoning.

About Kingdoms of Amalur: Re-Reckoning Fatesworn

Journey to a brand new Amalur environment filled with snowy tundras, deep caverns, and treacherous enemies, and visit mountain villages and the ancient lakeside city of Crownhold. Master the unstable power of Chaos with a unique new non-combat Skill tree and class of weapons and armor. As the fabled Fatesworn, you will wage a last battle against the Niskaru and their Chaos brethren, as procedurally generated Chaos dungeons turn every region in Kingdoms of Amalur: Reckoning into a potential battlefield.