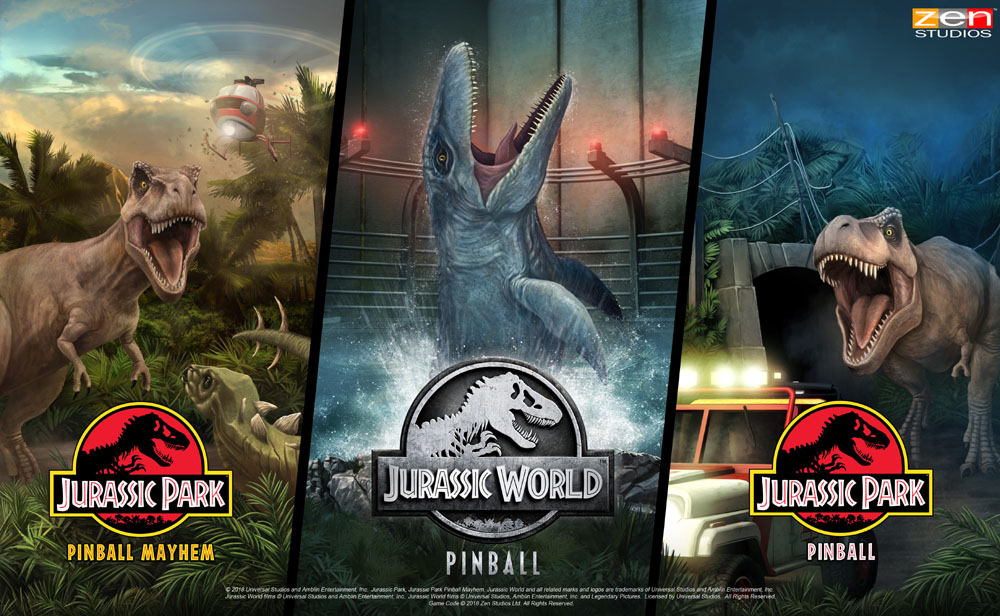 In collaboration with Universal Brand Development, Zen Studios will soon celebrate the 25th anniversary of Jurassic Park™ by releasing three all-new tables for its Pinball FX3 service. Themed around the history and lore of the iconic film franchise, Jurassic World Pinball features tables inspired by the events of the Jurassic World and Jurassic Park films.

On the Jurassic World Pinball table, film dialogue from your favorite characters accompanies action inspired by iconic film scenes—from training Raptors and neutralizing Pteranodons to escaping the Indominus Rex and feeding the Mosasaurus. One mode even transforms pinballs into Gyrospheres!

Zen Studios has spared no expense to bring you the finest video pinball adventure this side of Isla Nublar with its Jurassic Park Pinball table. Hear from classic film characters as you relive your favorite cinematic moments from the original film in a whole new way. Outrun the T. rex in an iconic Jurassic Park jeep, hunt Velociraptors or outsmart those clever girls in the kitchen.

Return to Isla Nublar on the Jurassic Park Pinball Mayhem table as you keep escaped dinosaurs at bay, deal with emergencies, rescue trapped workers, and help return the park to its former glory. You’ll even assume the role of a Stegosaurus battling a hungry T. rex.

“Just like Jurassic World’s scientists created genetically modified hybrid dinosaurs, so too have Zen’s developers created an amazing hybrid between great pinball simulation and beautiful video game,” says Mel Kirk, VP of Publishing at Zen Studios. “Jurassic Park has a very respectable pinball legacy—we still play the ‘90s arcade table to this day—and we’re honored that Universal has entrusted us to continue that through Pinball FX3 with our Jurassic World Pinball pack. It’s an amazing way to celebrate 25 years of one of our favorite film franchises ever.”