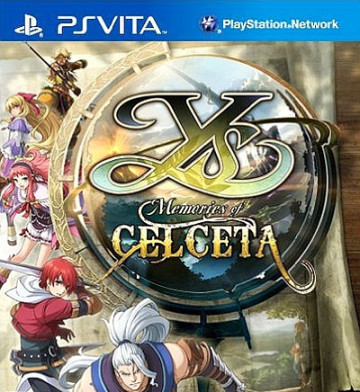 XSEED Games, the independent-minded console publishing brand of Marvelous USA, Inc., today announced that the action RPG title, Ys: Memories of Celceta, has launched, exclusively on the PlayStation®Vita handheld entertainment system. The timeless and much beloved Ys series spanning 25 years brings together a special celebratory package for its fans with the Ys: Memories of Celceta Silver Anniversary Edition. This Limited Edition release contains a 3-CD collection of original and arranged music spanning the entire history of the franchise, a cloth map detailing the lands of Celceta, a logo-emblazoned compass, and ‘Adol’s Travel Journal’ containing 130 pages of adventuring strategies and artwork, all within an exclusive commemorative package.

Ys: Memories of Celceta is an extensive reimagining of Ys IV, one of the few titles in the acclaimed series’ long-running history never to have made its way to the West. Re-worked from the ground up from famed series creators Nihon Falcom, the framework of the story has been updated to create a more intriguing tale filled with mystery and distrust.

Ys: Memories of Celceta revolves around the Ys series stalwart hero, Adol Christin, who awakens on the outskirts of the Great Forest of Celceta with no memory of how he got there. Soon, Adol finds himself beginning a new journey with an unknown companion as they delve into the forest on a quest to explore its vast expanses, searching for clues to his identity along the way.

Long-time fans and newcomers will find much to relish in Ys: Memories of Celceta. Combined with the largest overworld map in series history, players will undertake a majestic venture filled with new experiences, challenges and foes. The party battle system from Ys SEVEN makes its triumphant return, with a host of upgrades such as enhanced flash-guarding, adjustable party AI and unique abilities to help streamline encounters for fast and furious combat. Boss Rush mode makes a comeback too, pitting Adol and his companions against implacable foes to keep the challenge going well after the main story has been completed.

More information can be found at the recently launched product website: www.worldofys.com/celceta