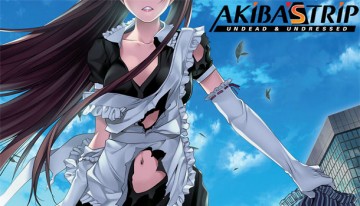 XSEED Games, the independent-minded console publishing brand of Marvelous USA, Inc., today announced that the company will launch its outrageous action RPG title, AKIBA’S TRIP: Undead & Undressed, for the PlayStation®4 computer entertainment system on November 25, 2014, just in time for the holidays. This PS4™ system version introduces a wealth of new features, including “Toybox Mode” and a “Visual Editor.” Additionally, the company released a brand new trailer showcasing the game’s next-generation debut on the PS4™.

In AKIBA’S TRIP: Undead & Undressed, players take an eclectic trip through a meticulous recreation of Tokyo’s “Electric Town” district, Akihabara (Akiba for short), to halt a growing malevolence that threatens everything the so-called “geek mecca” represents. Akiba has been invaded by vampiric monsters called “Synthisters” who prey on the anime- and game-obsessed patrons of Akiba – but these vampires feast on their victims’ social energy and will to live rather than their blood.

Taking on the role of a typical but naive local student named Nanashi, who has been transformed into a member of the walking undead himself, players must use an in-game smartphone app to identify which of the outwardly human inhabitants of Akiba are Synthisters, then free them of their clothes, exposing them to sunlight and sending them to the netherworld. To achieve this, players will use everyday objects from baseball bats to comic books to motherboards as weapons, beating enemies into submission before attempting to literally grab the shirts off their backs.

The PS4™ system edition includes a “Toybox Mode” that allows players to begin the game with one of every available weapon and clothing item, a “Visual Editor” that allows complete customization of virtually every aspect of the game’s look, chat commands that allow livestream viewers to directly affect the player’s experience in decidedly unusual ways, enhanced visuals with 1080p HD support and much more.