As the launch date for the much-anticipated and equally hyped Xbox nears, both consumers and industry experts are expressing concerns as to whether Microsoft has what it takes to get this system off the ground.

Ever since Bill(ionaire) Gates announced his plans for the Xbox at the 2000 GDC, almost everyone began frothing at the mouth waiting to get their hands on this glorious system that only existed on paper and in the minds of a few revolutionary businessmen. Media has hyped this system to the point where it can hardly be anything but a disappointment when it finally does release.

I remember the 2000 E3 show and the line that wound its way around the main floor, sometimes exceeding a 4-hour wait just to view a ten-minute movie of the Xbox. Back then confidence was high as were expectations that Microsoft would truly elevate us from our mundane gaming existence. Of course this was before Sony had launched their next-gen system and when Nintendo was still talking about something called a “Dolphin”.

This year’s E3 was the first time that anyone got a look at an early build of the Xbox and some even earlier builds of games that would be coming out for it. But what few games were available paled in comparison to the amazing library of existing and upcoming quality PS2 titles, not to mention the GameCube, which Nintendo was proud to showcase with amazing system-selling titles such as Rogue Squadron 2 from LucasArts. Microsoft was no longer the big fish in the pond. It was quickly becoming the Carp that nobody wanted.

Even the long awaited titles like Halo and Munch’s Oddysee who jumped the PS2 ship after Microsoft wined and dined the developers into joining their camp, were not that impressive. Most of the games shown on the Xbox look very much like PC games with the realistic, yet bland color palettes. One would argue that the Xbox is nothing more than a glorified PC, and while this is essentially correct, console gamers have different tastes and requirements in their games. The very nature of a TV requires brighter and more colorful graphics and any gamer who has owned a previous console may find the Xbox graphics “unpalatable” (pun intended).

Some of the more recent releases are starting to show some promise. The new Obi Wan game was canceled for the PC and moved to the Xbox and is currently receiving a fully graphics facelift to get the colors and brightness to a more console-friendly level. Games like DOA 3 and other original Xbox titles like Mad Dash Racing that don’t have PC origins are already looking much better than the games being ported from the PC. 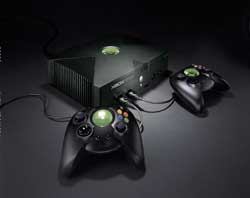 Companies that are developing for the Xbox have the luxury of creating games on a PC-like dev-kit. This means that PC developers can jump right in and create games without having to learn any proprietary “tricks” of the system. Sony execs have made one astute observation. First generation Xbox games will likely utilize most, if not all of the power and abilities of the Xbox. There is nothing more to learn and nowhere else to go, unlike the PS2 where we are only now starting to see some truly amazing titles appear a year after the release of the system. PS2 developers are finally learning how to unlock and exploit the power of the PS2. You will most likely not see any major advancement in Xbox games one or even two years later without significant hardware upgrades for the system.

One thing necessary to the success of any new system is a library of excellent and exclusive titles. Microsoft brags about having EA Sports onboard for all the new sports titles, but these games are also available on all the other formats and only serve to level the playing field. In addition, Microsoft isn’t going to have final dev-kits to the game designers until August. This gives designers less than three months to tweak and perfect any titles they have planned for launch leading to a major concern for many potential Xbox gamers.

There is still some consumer fear that the hard drive that comes standard on the Xbox will lead to the “release now – patch later” syndrome that PC gamers have been plagued with since computer games became mainstream. You can be sure that the first time little Bobby has to download a patch to get his new Xbox game to work, the mighty Xbox Empire will crumble. Console gamers simply won’t stand for anything less than a 100% fully functional game out of the box.

Consumers and industry experts aren’t the only ones starting to get nervous about the Xbox. Retailers are starting to get a bit upset. If you have walked into an EB or Babbages lately you may have noticed huge sections of the store dedicated to products that won’t be available for many more months. This is not their decision, but rather a directive forced upon them by the marketing moguls at Microsoft. Apparently if you want to sell the Xbox then you are going to play by their rules and those rules want certain allocations of shelf space and advertising.

Microsoft has another thing going against it. Nintendo is releasing their GameCube for $100 less and several days before the Xbox. Eager gamers with $300 in their pocket may be more inclined to pick up a GameCube and a couple of games rather than wait a week for the more expensive and questionable Xbox.

Regardless of the demand, Microsoft plans to have 800,000 units available (and hopefully sold) by Christmas. Given the fact that the GameCube is also a “new kid on the block” this will hardly be the year for any major console wars, at least from a software perspective. There may be some early victories in hardware sales, but the proof of a great system is always in the games and that war will have to be waged in 2002.