Gearbox Publishing has partnered with Compulsion Games to take We Happy Few, the eerie adventure about survival and paranoia, to new heights. On April 13, 2018, We Happy Few will launch worldwide with more content than ever―including a full-length story campaign played as three different characters and more than 250 unique encounters―realizing a much grander vision for the game. We Happy Few will be available both digitally and at retail for Xbox One, Windows 10 Store, PC, and PlayStation®4. Compulsion Games continues to retain all creative control over We Happy Few as it evolves from a crowdfunding digital success to a worldwide multi-platform retail launch.

Early Access and Game Preview Program owners of We Happy Few have been able to explore a portion of the procedurally generated world, collect and craft items, and interact with the Joy-obsessed society of Wellington Wells through stealth, combat, and conformity. When the game launches in full with the help of Gearbox Publishing, players will experience how these improved mechanics come together and give rise to three protagonists, each with their own reason for giving up artificial happiness.

Each of these three playable characters has their own particular strengths―and their own dark secrets. As they attempt to survive encounters with their drug-addled former neighbors, old friends, ex-lovers, and even each other, they may dig up some long-buried secrets of Wellington Wells itself.

“Our team was humbled by the initial public reception to We Happy Few, and delighted to have this chance to make it bigger. We’re longtime fans of Borderlands, and we’re excited to be part of a line-up that also includes games like Homeworld and Fortnite. Gearbox believed in us from the very beginning, and we think this partnership will make it possible to create the game that our community expects,” said Guillaume Provost, Studio Head of Compulsion Games

The limited We Happy Few Collector’s Set, priced at $149.99, contains 60s-themed goodies like a replica Bobby mask, “You Look Smashing” Lamp, the We Happy Few soundtrack on vinyl, a Joy alarm clock, and more. It does not include a copy of the game so that Early Access players can purchase it separately.

Today marks the release of the major Life in Technicolour update on Steam and Xbox One. Life in Technicolour brings new Joy effects, improved user interface, reworked AI, and more. This is the final major update We Happy Few will receive while in Early Access as Compulsion Games sets its sights on the full release. 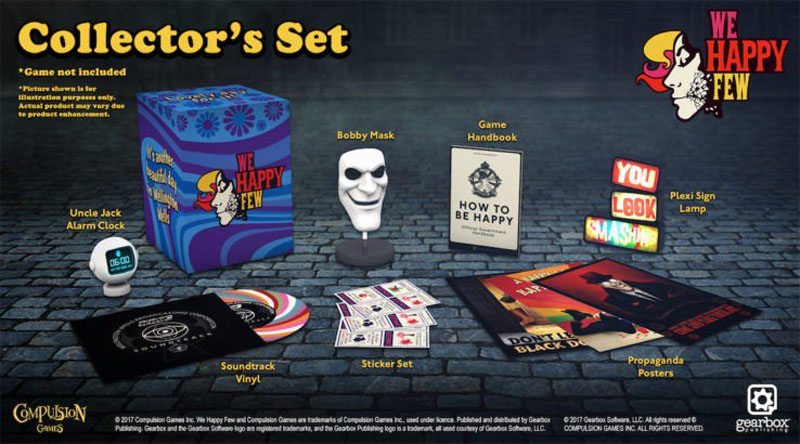 About We Happy Few

We Happy Few is the tale of a plucky bunch of moderately terrible people trying to escape from a lifetime of cheerful denial in the city of Wellington Wells. In this alternative 1960s England, conformity is key. You’ll have to fight or blend in with the drug-addled inhabitants, most of whom don’t take kindly to people who won’t abide by their not-so-normal rules. Discover the retrofuturistic city’s dark history as you play through the intertwined narratives of three quietly rebellious citizens of Wellington Wells, each with their own strengths and weaknesses, as they face their pasts, prepare for the future, and engage in activities that aren’t exactly status quo in the artificially enthused society.