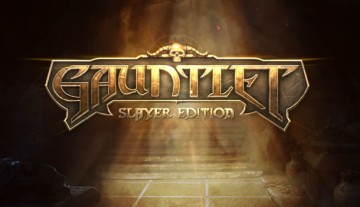 The Warrior, Wizard, Valkyrie and Elf of the co-op classic Gauntlet, are back in action and headed to the PlayStation Network in Gauntlet: Slayer Edition! Warner Bros. Interactive Entertainment and Arrowhead Game Studios announced today that the reimagined dungeon brawler will make its PlayStation®4 (PS4™) debut August 11th. Gauntlet: Slayer Edition is now available for pre-order on the PlayStation Store for $19.99. Fans can snag a reservation here: https://store.playstation.com/#!/en-us/games/gauntlet-slayer-edition/cid=UP1018-CUSA00701_00-GAUNTLETGAME0000.

One of the first multiplayer arcade games, this new Gauntlet experience is a perfect couch co-op game, allowing players to select from four classic fantasy-based characters – Warrior, Wizard, Valkyrie or Elf – each with a distinctive play style, unique strengths and weaknesses. In this enhanced edition of the game, players will travel to an unexplored realm and encounter new hero weapons and abilities, new monster types, additional features that increase team dynamics and strategy, and new gameplay modes to be revealed this month.

Gauntlet is rated M for Mature by the ESRB for Violence, Blood and Gore, with a setting to disable the game’s gore.