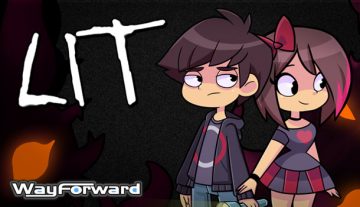 Venture into the dark hallways of a haunted high school and help guide emo teenager Jake as he searches for his lost girlfriend Rachael. Solve light-themed puzzles using a variety of gameplay mechanics including slingshots, light bulbs, windows, matches, lamps, and TV sets. Think your way around deadly creatures from the darkness in an effort to reach each room’s exit door without being swallowed up by the shadows.

LIT is developer WayForward’s classic puzzle horror series, newly reimagined for the PC with HD graphics, 16 stages, multiple par time goals, two possible endings, and a bonus unlockable character exclusive to this version of the game. The game offers control schemes for both keyboard and joypad.

Are you brave enough to puzzle through the darkness…?

WayForward’s LIT is out on Steam today.