Voodoo Vince: Remastered Returns to Xbox One and Windows After 14 Years

Developed by Beep Industries and published by Microsoft, Voodoo Vince debuted in September 2003 as an Xbox exclusive. This quirky puzzle platformer set in the magical underbelly of New Orleans is only playable on the original Xbox, which has sadly meant that fans have lost access to an old favorite over the years and many people have never had a chance to try it at all.

This will change on April 18 when the wisecracking voodoo doll fondly remembered by a generation of gamers comes back to life courtesy of a sprinkle of Zombie Dust. Voodoo Vince: Remastered, an HD remake for Xbox One and Windows, will be a $14.99 download on Xbox Live, the Windows Store, and Steam.

If you own a voodoo doll, you get to tap into its strange, mysterious powers. But if you *are* a voodoo doll? That’s when things get really fun. Join Vince on a wild tear through crawfish-laden swamps, haunted graveyards, and the eccentric French Quarter in search of his missing keeper, Madam Charmaine. Show enemies who’s *really* boss with 30+ voodoo attacks involving falling safes, prickly pushpins, bolts of lightning, and more. Vince may get his butt kicked, but his opponents feel the pain! 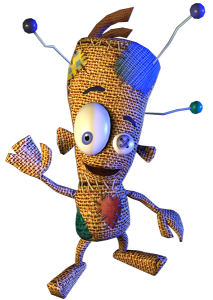 Clayton Kauzlaric explains how Voodoo Vince: Remastered came to be in this blog post: http://news.xbox.com/2016/10/05/voodoo-vince-remastered-xbox-one-early-2017/

You can also read our original 2013 review for the Xbox version and see what to expect when Vince returns next month.