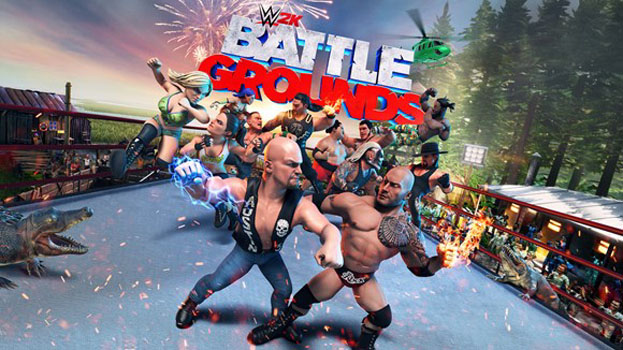 What it lacks in depth is makes up for in accessible,
fun.

Developing WWE videogames nowadays has to be a tricky task. On one hand you have an entire universe full of colorful characters that have already been developed, wacky storylines that have already been written, and thousands of fervent WWE fans who have already decided that they will be buying the next WWE title regardless of what the critics say.  On the other hand, well…you have those same thousands of fervent WWE fans who are going to be hyper-critical of every aspect of the game they just slapped down $60 for, because it couldn’t possibly be anywhere near as good as a Yuke’s-developed WWE game. 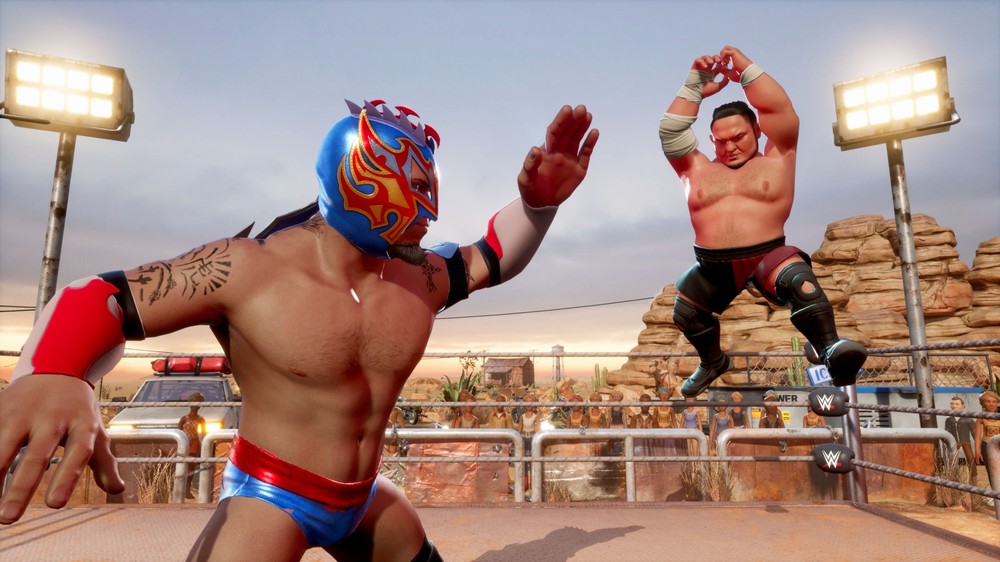 The folks at 2K Sports experienced this last year when after two decades yearly Yuke’s development, the development of WWE 2K20 was switched to Visual Concepts.  Even though Visual Concepts had been assisting Yuke’s on WWE development since 2K took the franchise over from THQ with WWE 2K14, fans (and critics) universally pan WWE 2K20 as the worst game in the franchise’s 20-year run.

All news was that the WWE 2K franchise was canceled, but 2K surprised us all with an announcement of a new take on the franchise with WWE 2K Battlegrounds.  Developed by Saber Interactive, Battlegrounds follows in the vein of one of Saber’s other popular releases – NBA Playgrounds – with a bobble-headed, high-flying, over-the-top take on the sport. 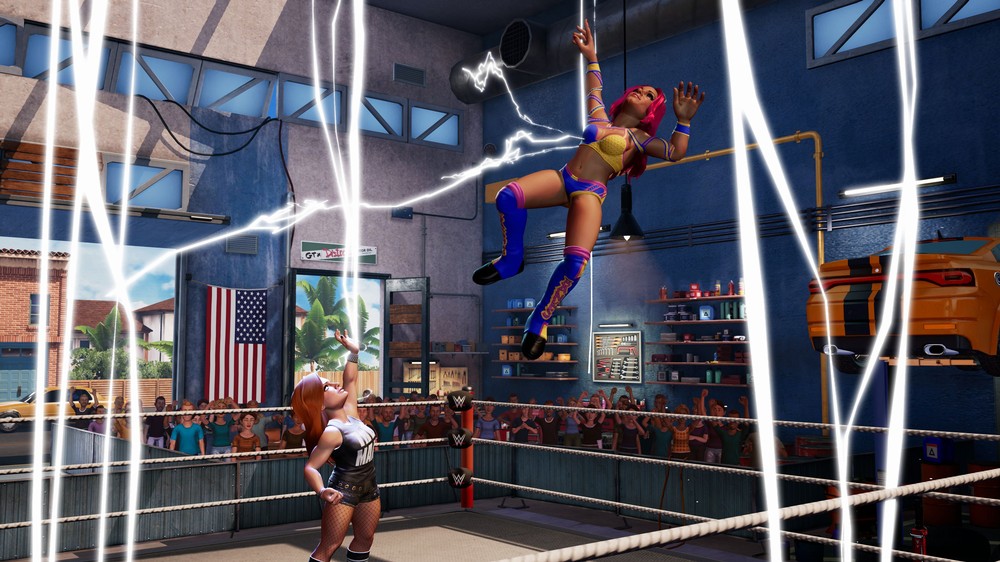 This approach certainly isn’t new; NBA Playgrounds was little more than an updated NBA Jam, and WWE Battlegrounds looks an awful lot like an updated WWE All-Stars.  That being said – where games like these lack in depth and substance, they generally make it up in accessibility and enjoyment.

WWE 2K Battlegrounds is by far the simplest wrestling gameplay in the industry.  It does away with the overly-complex button combos and timing of the previous titles.  Moves are broken down into simple strike, kick, and grappling combos that fill a special meter leading to tiered-layers of increasingly spectacular special moves festooned with fireballs, lightning bolts, and shockwaves.  Within minutes, gamers will be pulling off flashy combos, and once they master the random single-button reversal system, they will be pinning opponents like a veteran. 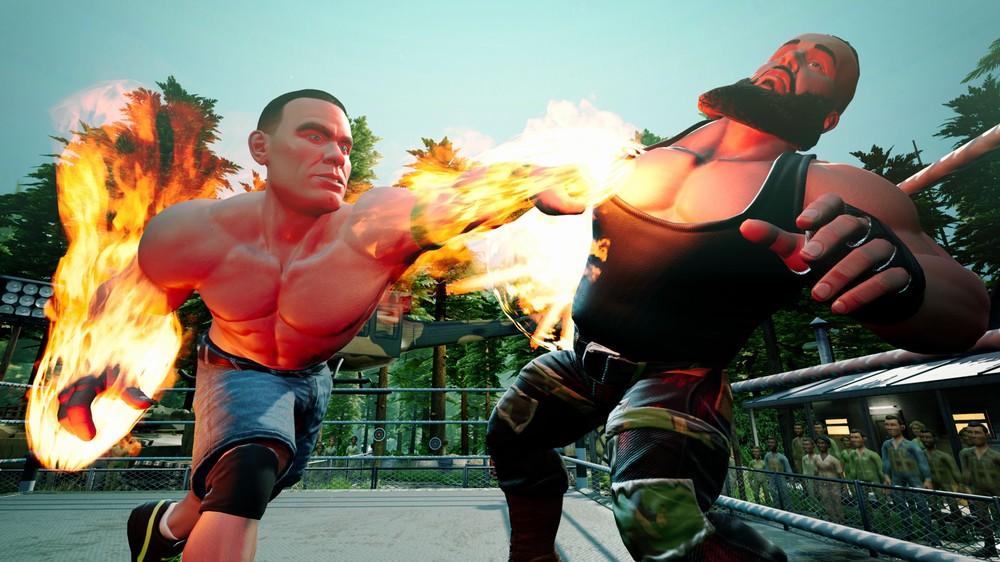 Battlegrounds’ campaign mode tells the story of WWE Agent Paul Heyman getting the go-ahead from Vince McMahon to start a new WWE television spinoff series called Battlegrounds, in which a stable of newly-recruited wrestlers fight to defend their local turf against some of the biggest names in WWE.  The story is told through a series of still comic book panel pages over which gamers can zoom and pan, but after a short time most gamers will simply skip the unnecessary wordy dialogue.  Sadly, once the wrestling begins there doesn’t seem to be a way to skip the unnecessarily long entrance scenes, which are about 30 seconds each and identical for each and every wrestler in the game.

The entrances scenes aren’t the only shared aspects of WWE 2K Battlegrounds – in fact, most of the move sets are shared as well.  The wrestlers are each pigeonholed into one of five predefined “style” classes: Powerhouse, Brawler, Technician, High-Flyer, and All-Rounder.  Aside from notable signature moves for a given wrestler, the remainder of the move set is shared by all wrestlers within a given style class regardless of whether the wrestler can (or will) perform the move in real life.  This will certainly make those fervent WWE fans blow their tops, but it lends to the accessibility for the casual gamer. 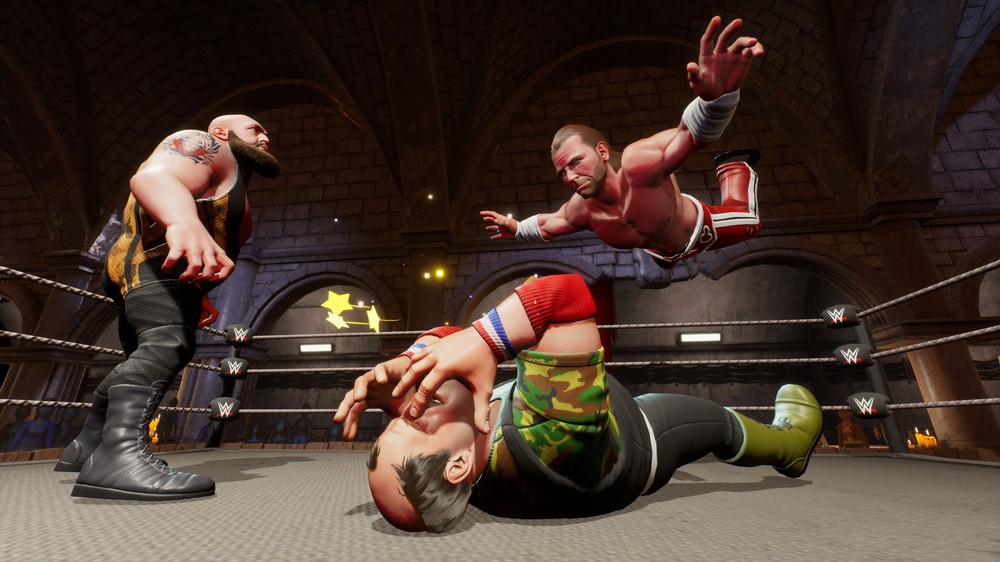 Aside from the campaign mode, there are a handful of single and multiplayer exhibition modes, including One-On-One, Tag Team, Triple Threat, Fatal Four Way, Steel Cage Match, and Royal Rumble.  Online play supports a surprisingly enjoyable King of The Battleground mode in which online gamers wait in the lobby for their chance to fight the winner in a King of the Hill style competition.

Much like NBA Playgrounds, WWE Battlegrounds is rife with microtransactions – to the sound of about $4 per wrestler.  Of course you can always grind your way to new wrestlers, but it would take roughly 2 to 3 days of constant play to garner enough in-game cash to make the purchase.  Considering the MSRP for the base game is $40 rather than the standard $60, the $20 difference can buy about 5 wrestlers. You can decide if it’s worth it to you.

WWE 2K Battlegrounds is as pickup-and-play a wrestling game as it gets.  And while it does lack in depth, is mired in microtransactions, and I’m sure true WWE fans will despise it as such, I was glad to have a wrestling game that I could play without requiring an instruction manual.