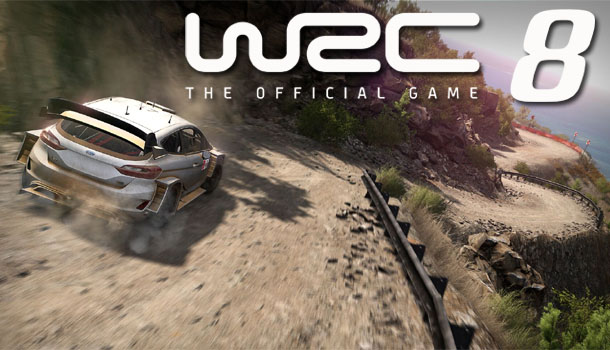 It doesn’t get any more real than this.

Earlier this year I reviewed DiRT Rally 2.0 and my main takeaway was that the game “Closes the gap between game and reality”. Here we are only six months later with yet another off-road rally racing game, this time the latest installment in the WRC franchise, and I can say without a doubt that WRC 8 FIA World Rally Championship not only achieves reality, it surpasses it. I play dozens of racing games each year and I’ve have reviewed hundreds but nothing comes close to the level of complete and total immersion you will find in WRC 8, not just in the actual driving of the cars, but in every facet of what goes on behind the scenes of a profession race team.

For those looking to be dazzled with numbers, there are 50 teams you can drive for as long as you can maintain a good reputation and don’t get kicked. There are 14 rallies and 100+ special events spread across the world of racing in 14 countries rendered to near photo-realistic quality, and with dynamically generated weather, your racing experience can change at a moment’s notice, not just visually, but in how your car handles and performs.

There are numerous ways to play WRC 8 although at the time of this review the online multiplayer Competition mode is still not available. There are, however a few other ways to play online in competitive events that run for a duration and allow you to race and log your best times on the leaderboards. There is also a split-screen local mode, which makes for a fun way to compete with someone sitting right next to you. 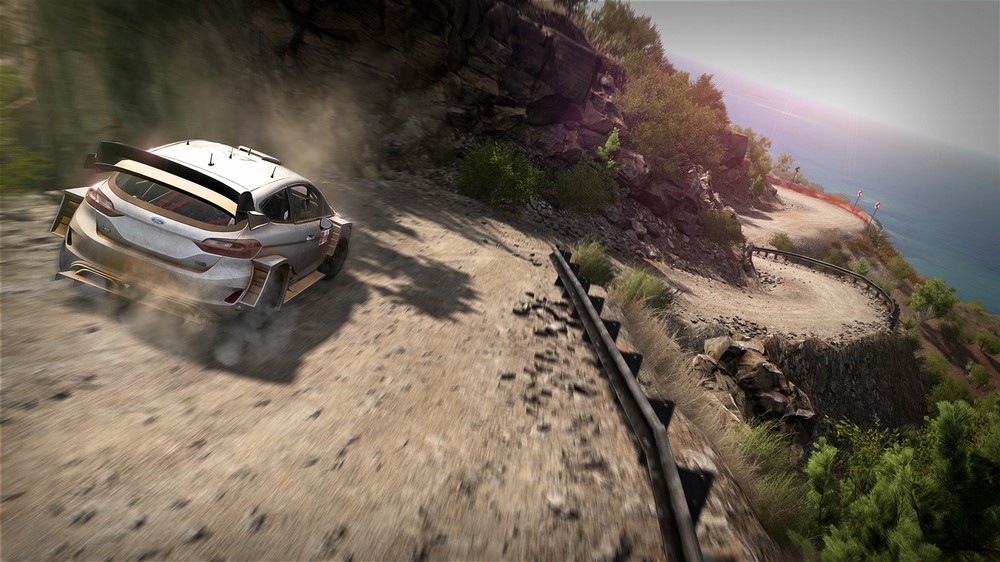 A majority of the content resides in the single player section of the game that includes Quick Play, Season, Training, and a Test Area, and of course, the Career mode. Quick Play grants you access to any of the rallies with your choice of car and weather conditions, while the Test Area lets you play around with various car setups and try them out. Training is a set of training exercises on a closed track while Season mode is basically the core races of the Career mode without all the crew management, but for those looking for the ultimate immersion look no further than the epic Career mode; a mode so vast and complete there is an extensive tutorial that will follow you through the first several weeks of racing, by which time you should have a good grasp of all the elements that go into this comprehensive mode.

Before we dive into the Career mode I would be remiss if I didn’t mention the robust options and settings for this game; not just in technical tweaking but also in the level of racing realism that spans everything from casual arcade to ultra-realistic – I’m talking the “Permacrash” option where one good wreck can take you out of the race. You also have adjustments for ABS, TCS, steering assist, and whether damage is cosmetic only or if it will impact your performance. You can toggle a variety of instruments on the HUD and pick from numerous views including an ultra-realistic cockpit cam. I normally go with the cockpit view in all my racing games, but this game was so brutally realistic, both in limiting my view of the track combined with the weather effects on the windscreen, that I “cheated” and went with the hood cam – not that it helped. 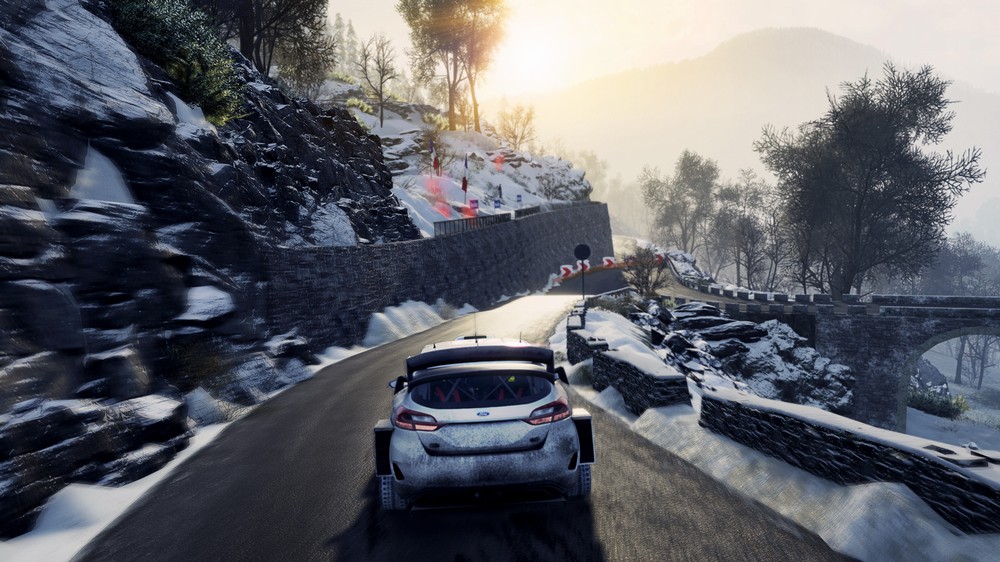 Additionally, there are pages of visual tweaks for lighting and shadows, textures and particles, draw distance, vegetation and crowd density and even water quality. It took some experimenting to find a perfect set of conditions for both my ultra-wide monitor and my RTX2060 Super card, but I was able to get a locked 60fps and if I uncapped the framerate I was hitting the 120-130 fps range with most options set to medium or high.

The only other setting left before playing is your career difficulty, which determines the race times of your opponents as well as how many “restarts” you get; unlimited for Easy and four tries for all the rest. Keep in mind that you won’t be racing actual on-track cars. This is authentic rally racing where cars are released at intervals and you are merely racing the clock. One nice feature for returning WRC players is the ability to pick your entry point into the competition. Seasoned veterans can attempt to qualify for the WRC 2 Privateer – you get three tries, otherwise you can opt for the Junior WRC, which eases you into the experience and offers the overall best experience.

Next up is picking your contract with a manufacturer, which also comes with its own set of side objectives that follow you throughout the career. Completing objectives along with winning or placing high in race events will boost your reputation with manufacturers. With all your settings in place you’ll find yourself in the workshop, the hub of all activity between the actual races. In this menu-driven interface you will setup events in the calendar, recruit and hire crew members to fill specific slots on your race team; everything from a meteorologist to help predict weather for upcoming races, to publicity agents, a financial director to save you money, mechanics for mid-race repairs, and even a physiologist to help bolster team morale that is sure to plummet when you fail to finish in the top three. You can get driver stats, check your email, get new race info and offers, and pay your repair bills. 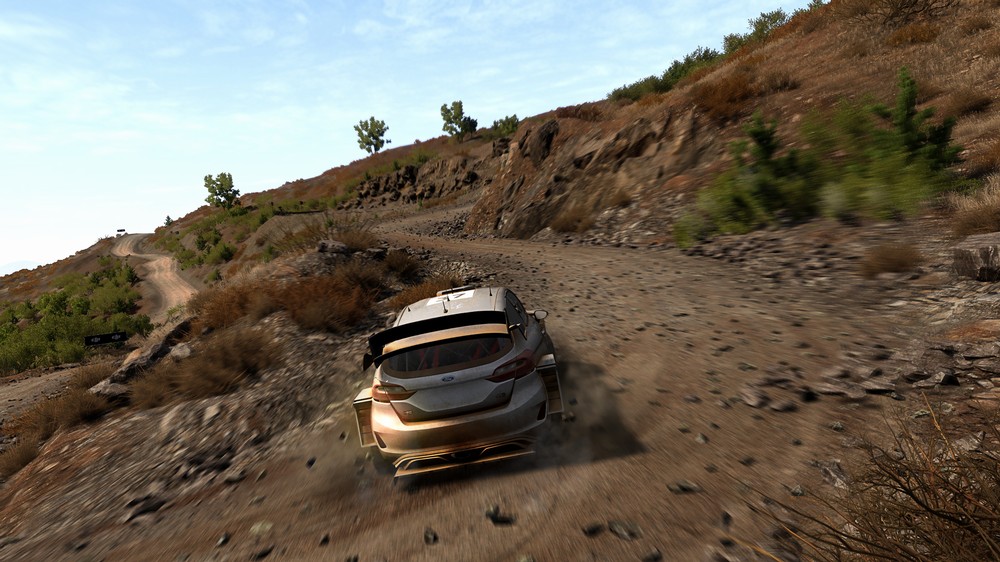 There are all sorts of systems in play in WRC 8. You’ll need money to pay salaries and repair your car, and your manufacturer reputation and crew morale are all dependent on how well you perform in the rally events. Thankfully there are numerous non-rally events like challenges and historical races that give you plenty of chances to boost your stats, often while driving someone else’s car, so you aren’t even responsible for damages. There are also ongoing side objectives that can earn you bonus cash and XP for observing certain conditions or restrictions; things like not using hard tires for two races or not spending more than 35 minutes on repairs during a rally.

You’ll also be earning skill points which all feed into this massive R&D skill tree, a web of unlockable icons that will boost all elements of the racing experience spread across four unique branches; team, performance, crew, and reliability. You’ll typically unlock two new skills per race, which can help reduce repair times, earn bonus XP or cash and even help minimize team depression when you lose a race. And yes you will lose. In the first month of my race career I only placed 1st in one phase of one rally event. I would usually average 8-10th place with a final finishing position of 9th or 10th. I won’t lie; this was a huge blow to my ego as I consider myself pretty good at these games. Dropping the difficulty to Easy instantly got me those first -place finishes but they felt empty and unearned.

WRC 8 FIA World Rally Championship is a serious racing simulation, and while it can be setup and enjoyed by casual race fans this game is clearly intended for diehard racers. The game is playable with a gamepad but not easily winnable. The new attention to weather and dynamic road conditions require the smooth analog inputs of a racing wheel and pedal combo. The difference between a gamepad and my G29 racing combo took me from 10th place to a podium finish. Using the trigger on a gamepad to throttle or brake on slippery road surfaces is next to impossible, even with assists turned on. 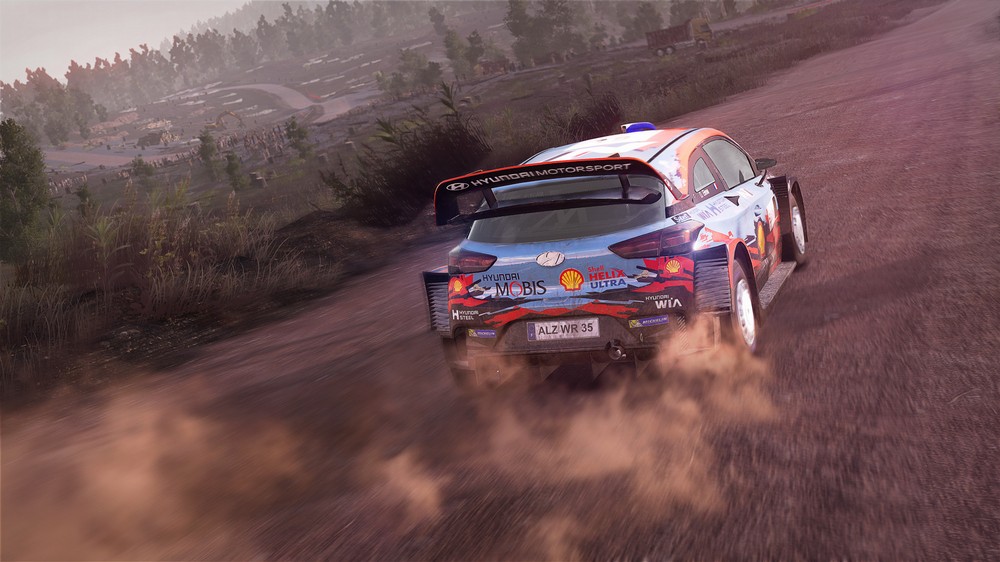 I just started driving in rally events a few years ago in real-life and it is unlike any other type of racing, especially after 15 years of paved circuit racing. There is this butt-clenching feeling you get when you are just on the edge of control, when you’re not quite sure your tires are going to stick, or your car might go tumbling over the edge of an un-railed hairpin turn and WRC 8 FIA World Rally Championship captures that feeling flawlessly. One of the first rallies in the game takes place on the snowy roads of Sweden, and that loose traction and slipping around turns trying not to overcorrect is fantastically authentic; it’s a feeling that carries over into sandy and rocky terrain with just the right amount of tactile variance in the vibrations you get in a force feedback wheel or even an Xbox Elite controller (to a lesser degree).

WRC 8 FIA World Rally Championship is more than a video game, its part lifestyle simulator, part driving simulator that can only be bested by doing this in real-life. My only minor quibble is the omission of a true competitive online mode (coming soon). Arguably, real-word rally racing isn’t about grinding bumpers on a NASCAR oval. Rally racing is about you versus the clock. It’s about man vs road; memorizing every twist and turn, and listening to the callouts of your co-pilot- which are particularly outstanding in this game; clear, concise, and perfectly timed. And while fighting for leaderboard superiority certainly has its own addictive appeal, it would be especially awesome to have some sort of multiplayer component with 8-16 player head-to-head racing, even if it defies the reality of the sport. But as the ultimate solo rally simulator and a fantastic new entry into the world of esports racing, it doesn’t get any more real than WRC 8 FIA World Rally Championship. Are you up for the challenge? 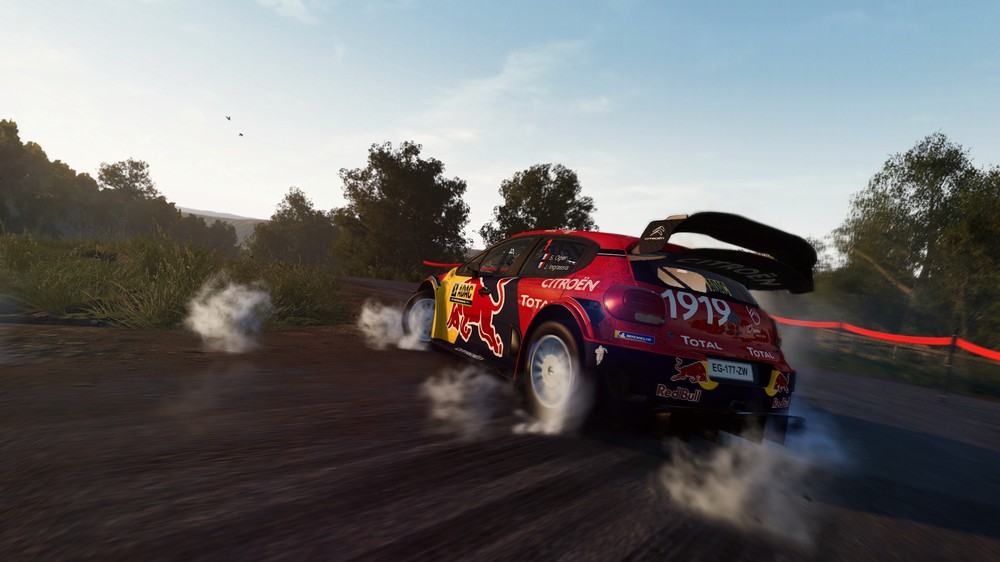 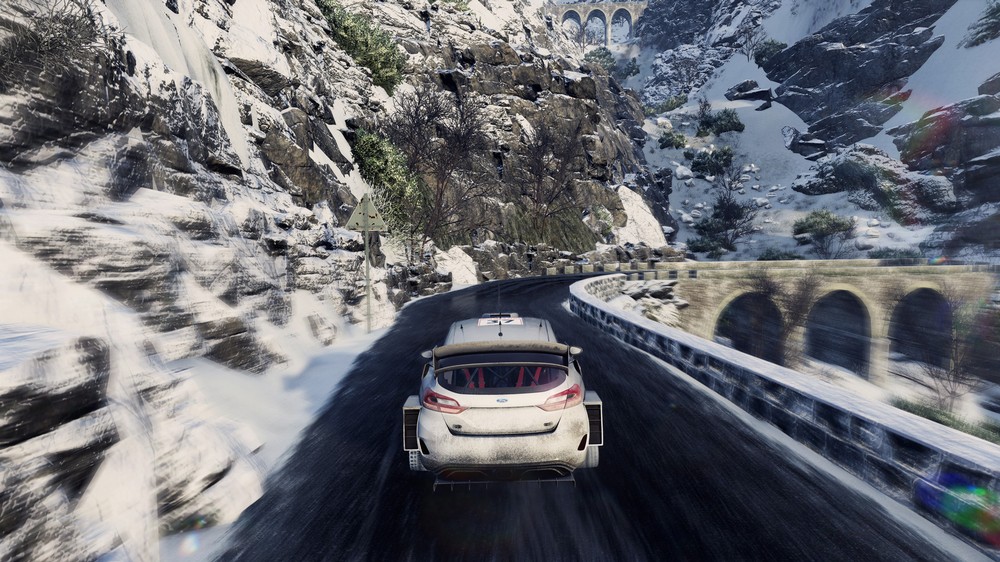 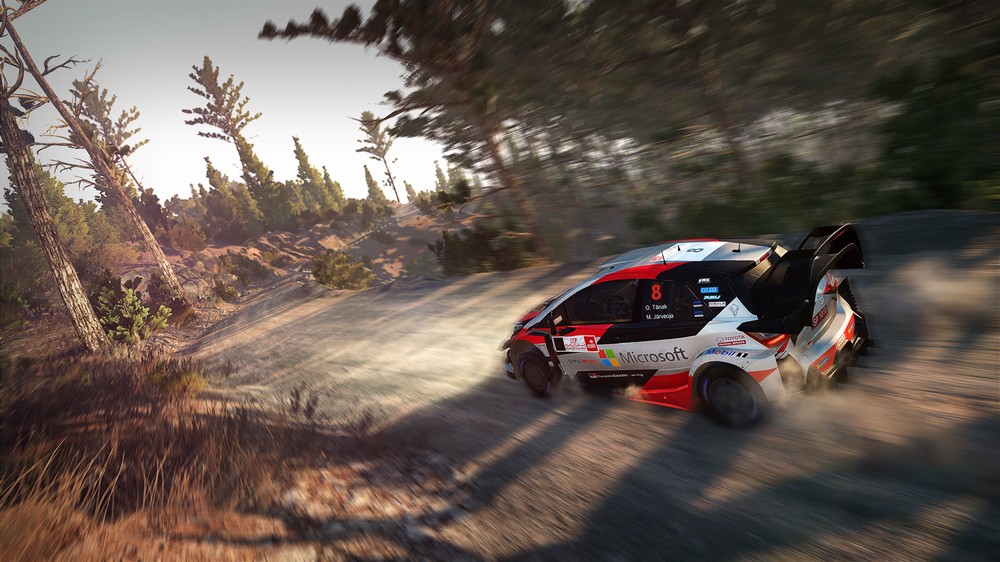