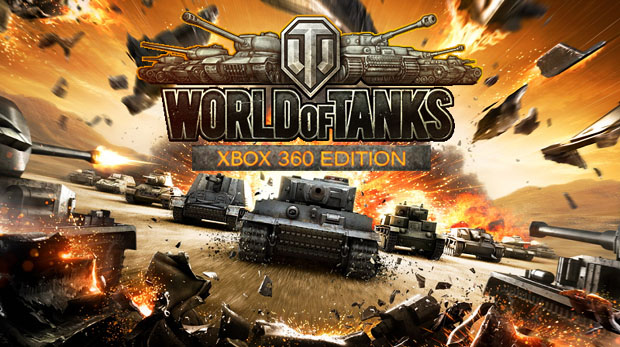 Potentially a money pit, Disadvantage for players who choose to not use in-game purchases

Perfect balance of genres and mixed gameplay that all tank lovers should enjoy.

There are some things that are almost universally true about the gaming community when it comes to military titles. Top on that list is that we like to hear things go boom and in a big way. This goes double when you’re the one pulling the trigger with an enemy in your sights and nothing says military like a several ton World War II tank. A while back I got my first look at Wargaming West’s Beta for World of Tanks: Xbox 360 Edition and I’ve been very eager to see what the finished product would bring ever since. Over the past several weeks I’ve had the opportunity to dive in to the finished product as World of Tanks: 360 Edition hit the Xbox Live Marketplace globally this month and I’m here to give my SitRep.

World of Tanks: 360 Edition for those who are not already accustomed to the PC version is a hybrid comprised of elements from the MMO, FPS, RPG and Simulation genres all in one nice little package. Much like the PC version it’s important to know that World of Tanks: 360 Edition is free-to-play though only for Xbox Live Gold subscribers. With that said if you are a Gold member then you are in for a lot of fun after the initial 2.5GB install with more content to be released later including maps and new tanks.

World of Tanks has a lot of things going for it that I absolutely love starting with its MMO and RPG elements. Tanks are powerful devastating machines though not always for the same reasons in battle and that’s something Wargaming West really tapped into with this game. Much like an MMO, there are five different classes of tanks: light, medium, heavy, tank destroyers and artillery to utilize. You only have access to a handful of Tier I tanks to start out with more tanks becoming available as you move up in the tier ladder all the way to Tier X. While tank destroyers and artillery tanks are out of your reach at first, the light and medium tanks will help you get acquainted with the controls and tactical applications that each machine offers to the team. 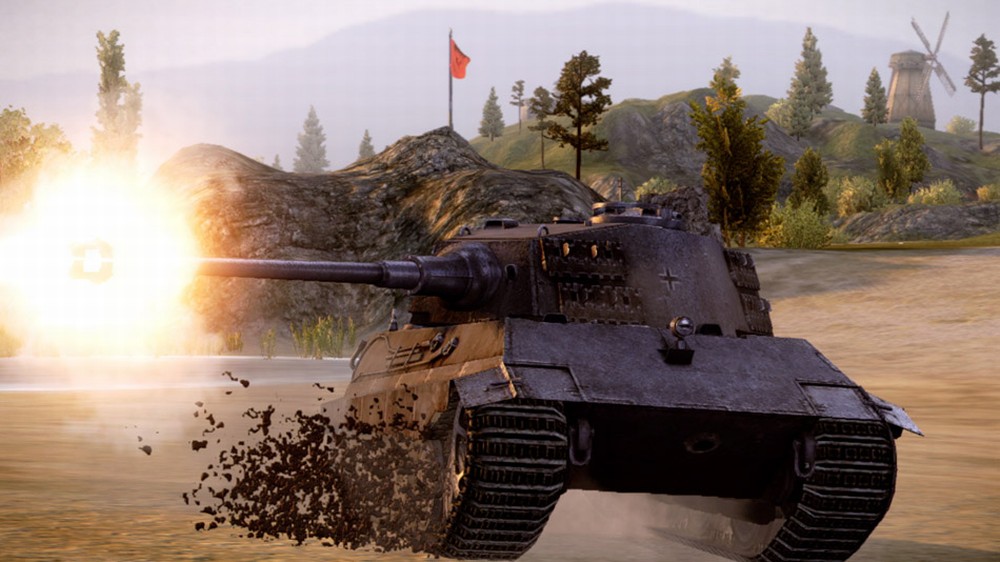 While I like the big lumbering Tank Destroyers and Artillery units that can take out enemies at a distance thanks to their heavy frontal armor and long range turrets, I’m particularly fond of the light tanks like the German Pz.Kpfw. II or the M3 Stuart American tanks. These highly mobile units can clear great distances offering recon support for the other class tanks by spotting enemy tanks at decent ranges allowing for your teammates to find them on the battlefield and even going so far as to call imminent threats to your base or team. These units however lack heavy armor and all tagged tanks will disappear from your team’s radar if you are destroyed. Players who prefer a more up close and personal battle would feel right at home using the medium tanks like the German Panther or American M4 Sherman. Medium tanks may lack the higher speeds of the light class but function amazingly well in packs on a well-coordinated team especially against tank destroyers’ weak rear armor. Heavy tanks, like the American T14, on the other hand work well as route deterrents as long as the player works to protect its vulnerabilities.

World of Tanks Xbox 360 Edition may be based on its PC counterpart but I have to say that it handles amazingly well with a controller. A large part of lasting in matches is how well you adapt to each tank’s simulated handling over diverse terrain and how to aim and actually damage your opponents. Like a real world tank, your vehicles in World of Tanks actually are slowed down when going through terrain like swamps. Every tank in the game is a little different even within the same class so it’s up to the pilot to learn each one’s strengths and weaknesses. You can however use the environment as a form of camouflage or cover in combat which is great for getting the drop on the enemy at times as you have a few seconds to do some damage as both you and them become viewable to each other via Second Sight. 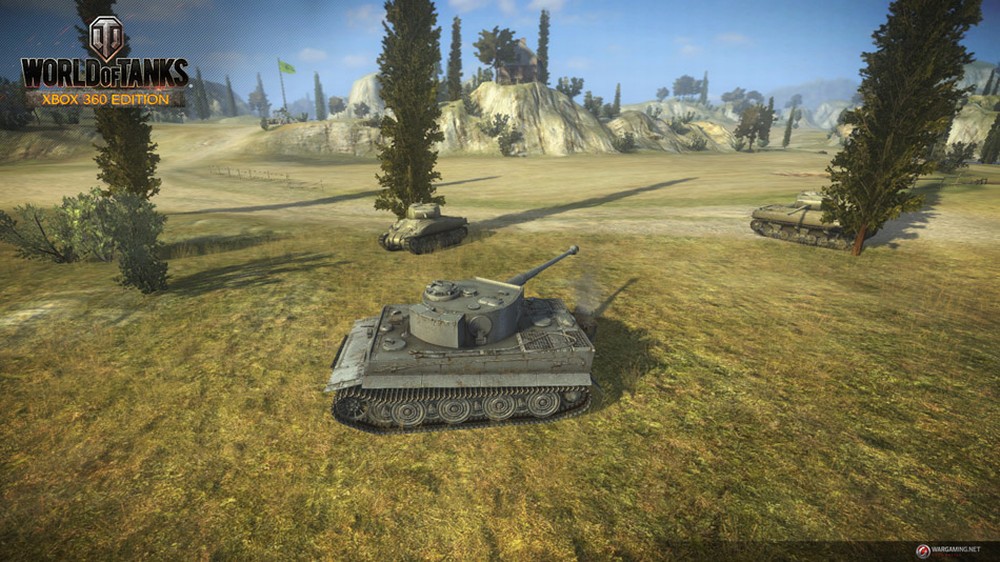 World of Tanks: Xbox 360 Edition is a free-to-play game as I mentioned and with that comes the micro transactions. It is possible to play this game without paying a dime though but for those seeking a viable edge you can spend real money to purchase the gold required to for instance become a Premium player for a set amount of time or apply camo to your vehicles permanently. Now depending on the game, I don’t really cough up cash to gain an advantage, but the system in place here does give the player a remarkable advantage both in the ammo you can buy and the experience and credits earned in combat to make it a little worthwhile.

Participating in battle, win or lose, nets you two kinds of XP and silver based upon your contributions to the battle. The better you do the more you rake in. This is where the RPG system comes into play as you use your hard earned silver to purchase packages and tanks. The two kinds of experiences or XPs earned are regular XP (silver stars) and Free XP (gold stars) and both are used to research upgrades to your current tanks or towards new ones. The silver stars are only useable on the tanks that earn them through your usage of them though a small percentage of your earned XP gets turned into Free XP which can be used towards any tank or upgrade research. In true RPG form though the next tier of tanks cannot be accessed or purchased with silver until you research the prerequisite tank or package. Luckily you don’t have to actually buy the items to proceed up the tree you just have to research them. If you find yourself loving a particular tank you can make it an Elite tank by researching all of its packages and the connected tanks around it. This gives the ability to convert all XP earned on that tank into Free XP for a fee which I found extremely useful. 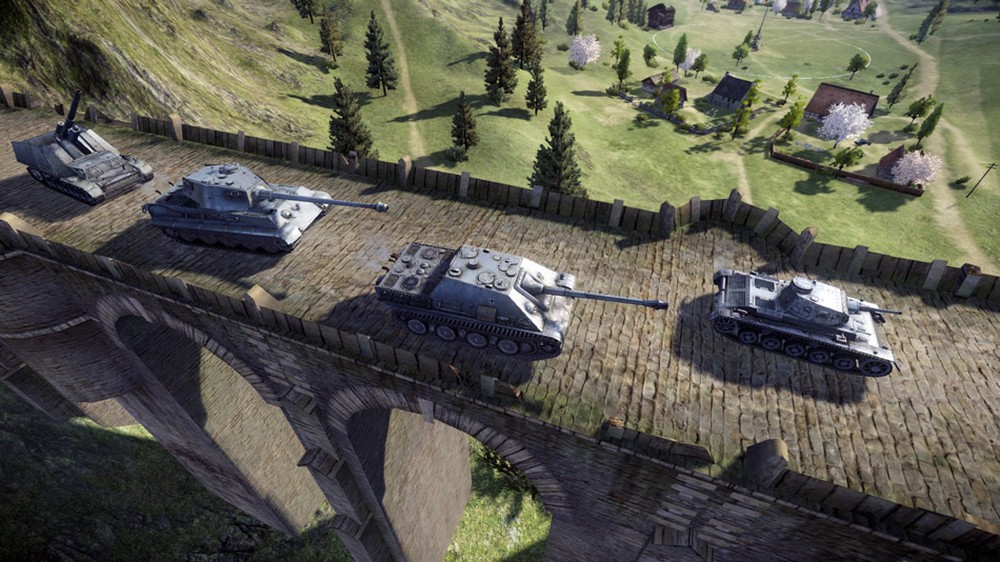 One of my earlier impressions of World of Tanks: Xbox 360 Edition was that I really liked their recreated portrayal of famous World War II tanks graphically. That roster has now been upgraded to over 100 different tanks from the U.S.A., Germany and the UK with more tanks to come. These machines of destruction look good as you roll through fences leaving tank treads tracks in the earth as you go. Environments are also destructible to a point such as blowing out a wall that’s being used for cover by another tank though sometimes crops don’t fall under your might as you roll though some maps. The maps themselves are also quite diverse with new maps being released. World of Tanks: Xbox 360 Edition utilizes a third-person perspective as the default view for maneuvering your tanks over the terrain but like any good military shooter the best view for taking down enemy tanks is right down the barrel first person style. Doing this is not only crucial for firing on distant targets but really puts you in the firing seat visually. It also helps that World of Tanks: Xbox 360 Edition also features a clean and easy to read HUD and menus.

As with my preview the audio doesn’t disappoint as you hear the roar of the engines and the sound of tank treads moving. You can even hear the sound of the turret swiveling as you aim down the sights before firing a deafening shot. I know guys and gals love explosions but a little caution should be exercised if you’re wearing a headset to chat and strategize while playing this. Each tank that I tried also sounded a little different from each other to fit their size and type instead of some cookie-cutter audio which was really nice. 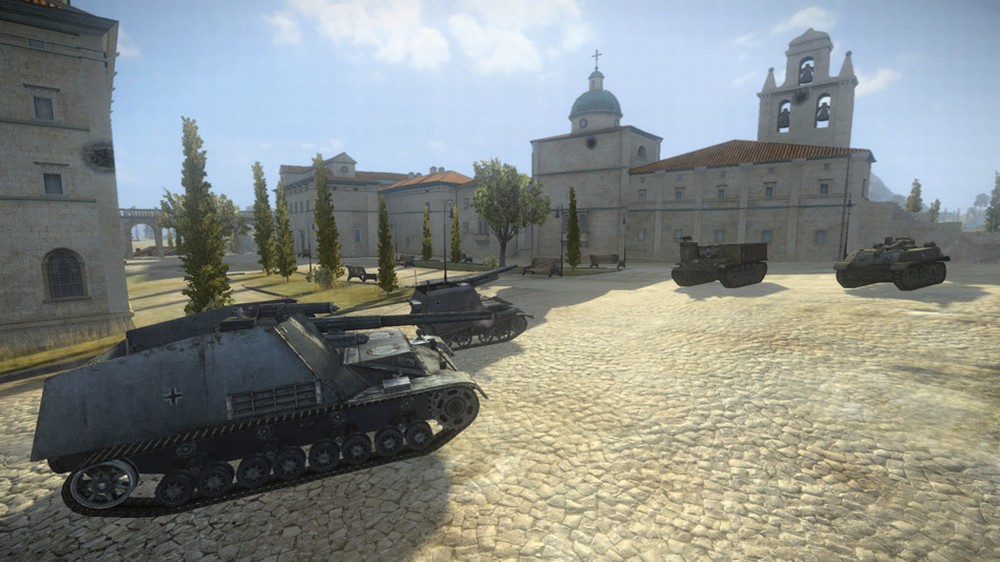 World of Tanks: Xbox 360 Edition is a game I can easily see someone dropping a lot of time into and like many MMOs and FPS titles its better with friends. Three friends can get together forming a Platoon over Xbox Live so you can deal out damage in tactical fashion in randomly selected maps and modes. In the time that I played I came across some really good teams of random strangers and things went remarkably well though not always. Friends make things a lot easier though and it’s always a good idea to use like leveled tanks as you’re matched with other players according to tank tiers. While the maps may vary based on your tank tier there are only three game modes available to play. You have Standard which tasks the two teams to take the other’s base while the Encounter has either side pushing to take control of a single neutral base. The third mode Assault is a game of attacking or defending a single base, although all modes ultimately end when one side or the other is completely destroyed.

After playing World of Tanks: Xbox 360 Edition for the past few weeks, I can easily say that my initial impressions of the game from my time with the Beta have held up spectacularly. The only way that this game could get any better would be perhaps a graphically facelift and more destructible objects in light of the new generation of consoles to keep this game exciting for some time to come. The game handles remarkably well after you get the hang of things and it’s fairly easy to learn the ropes while you play, even for new players looking to join the fun. If you have Xbox Live Gold and a love for things that go boom, then I absolutely recommend checking out World of Tanks: Xbox 360 Edition available now on the Xbox 360 Marketplace. 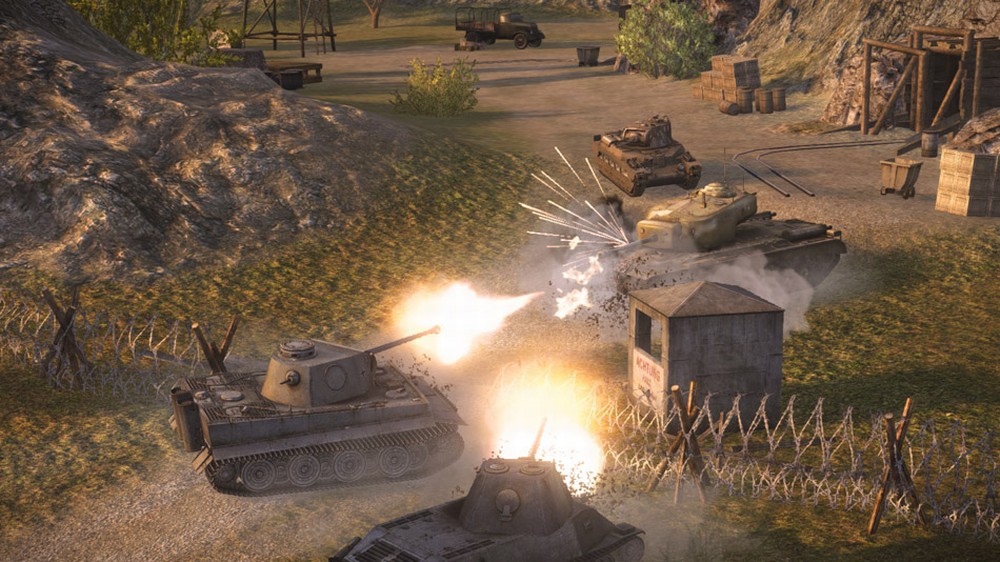 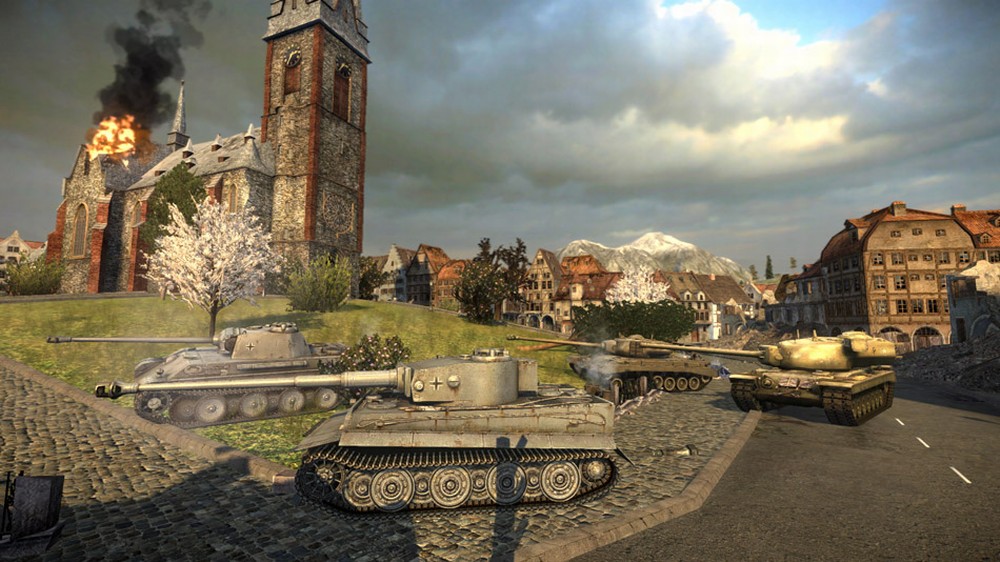 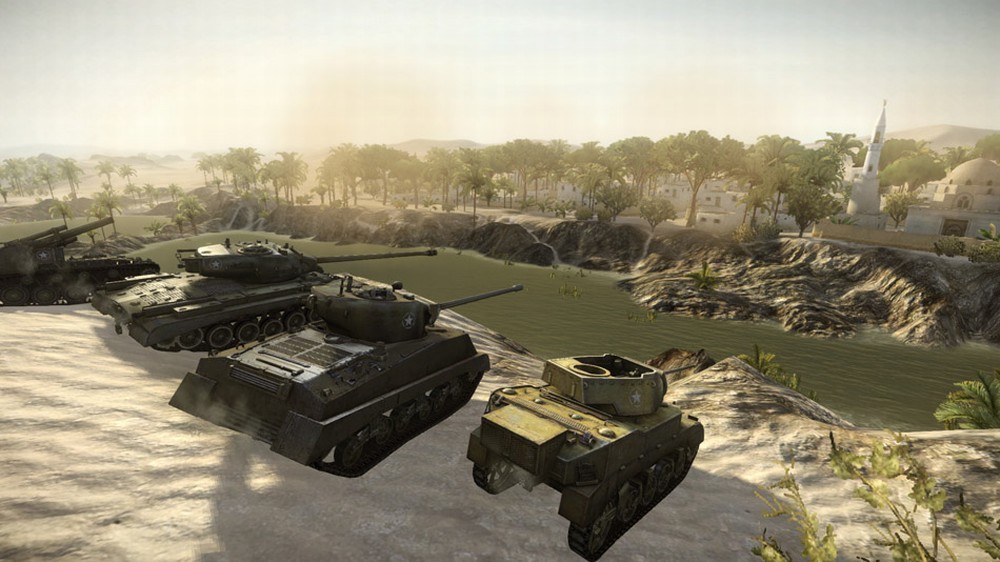 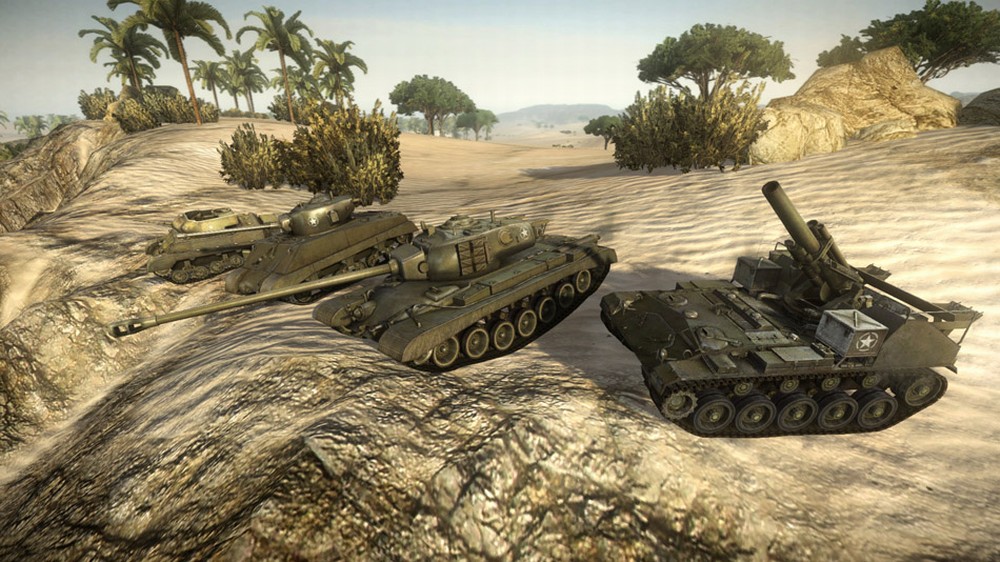