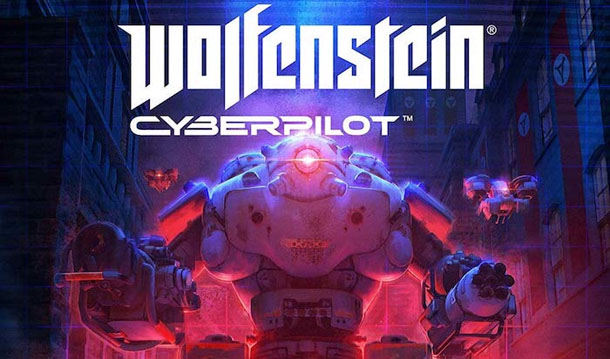 I’ll keep this review short and simple, much like this miserable excuse for a tech demo that’s being branded as an actual game. I’m not sure who’s trying to get away with what here. I’ve been a fan of the Wolfenstein games dating back to the original that literally gave birth to the FPS genre.   When I heard Bethesda was attempting to do something in VR I had no reason to suspect anything short of revolutionary. Sadly, I was sorely mistaken.

Released alongside another “experimental” Wolfenstein spinoff, Youngblood, that introduces a fully co-op campaign, Wolfenstein Cyberpilot is a VR-only spinoff of that spinoff with a focus on piloting three military war machines, the Panzerhund, a fire breathing wolf/bear hybrid, a military Drone capable of hacking computers and disintegrating Nazis with its Taser, and the Zitadelle, a giant Transformer-sized mech with missiles and chain gun.  Sounds like fun so far…right? 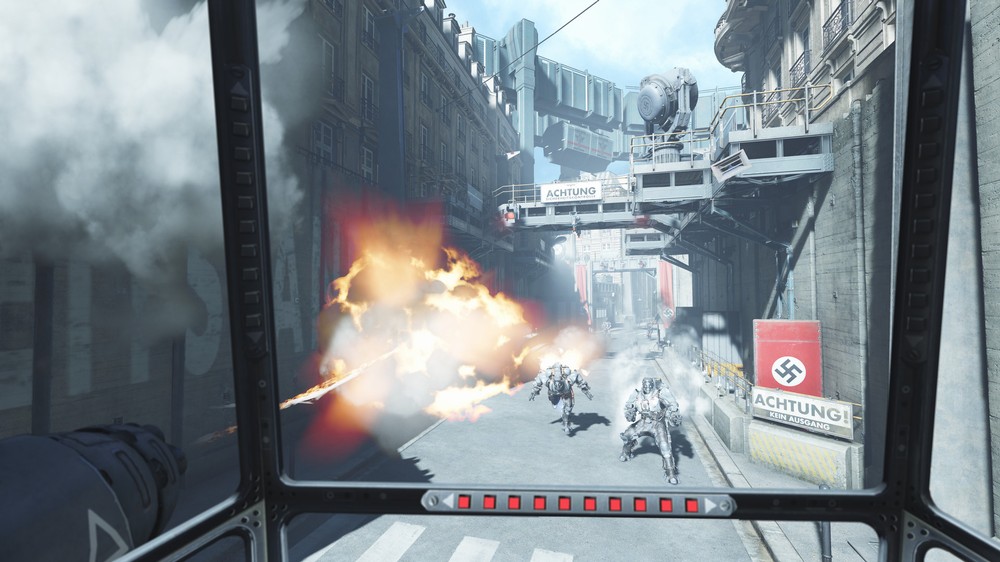 The game loosely ties in with Wolfenstein Youngblood in that you are exploring the same Parisian streets during the same time period as Blazkowicz’s twin daughters, assaulting the same Brother 3 tower found in the non-VR game. Cyberpilot is loaded with setup, putting you in the literal pilot seat of a remote control station where you get to pilot these three assault “vehicles”. To spice things up your chair is also part of a hydraulic lift allowing you to go up and down to explore four levels; one being the pilot station where you play the game, another being a lab to tweak weapons, an office level to admire your collectible miniatures, and a garage level where you get to hack Nazi drones then reuse them for your own rebel agenda. Ironically, you’ll spend about as much time doing busy work around the bunker as you will actually piloting drones.

Part of the problem…a big part, is that Cyberpilot is only four levels long and they are short, easy, unchallenging levels. You get one level for each of the three vehicles and then a final level that combines the use of all three in a mission that is still less than 15 minutes long. The entire game takes just over two hours (just enough to negate Steam’s refund policy), and the entire game feels like a tutorial and just when you are ready to settle in for the actual game the credits roll. Was zum Teufel!! 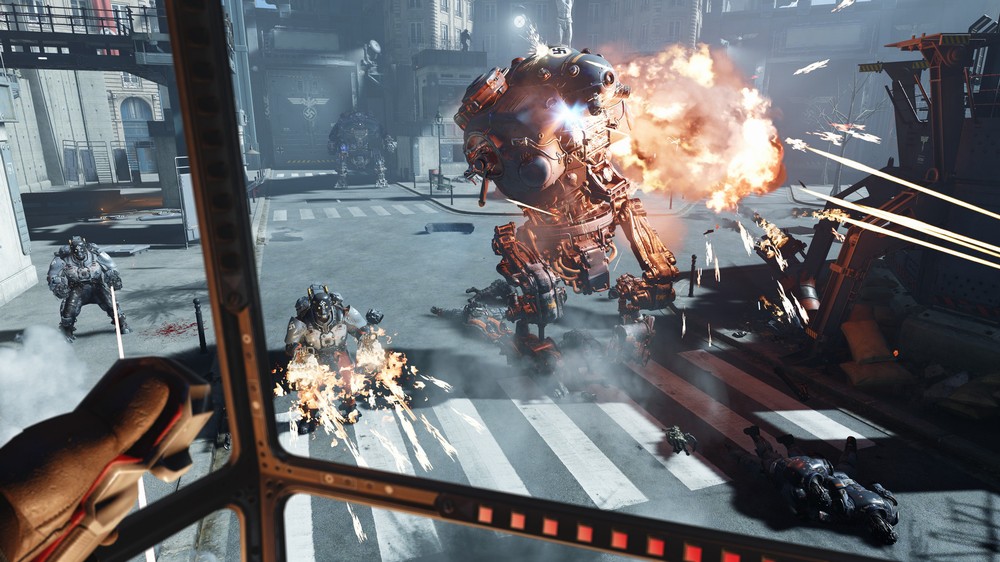 For whatever reason Bethesda seems to be giving the Oculus Rift the cold shoulder for this release. While it is not mentioned on the Steam page, the Rift actually works just fine despite having no support on the options or controller diagrams for inputs. It’s not hard to figure out since the game is overly simplistic. Everything is basically controlled through physical hand gestures, environmental manipulation, and squeezing of the triggers.  You’ll even grab your own set of virtual motion controllers within the game when it comes time to play.

Cyberpilot is best played seated but many of the controls are exactly where the arms of my gaming chair are located, forcing me to move forward and sit on the edge of my seat so my hands could go low enough to hit certain buttons.   Hacking each of the robots was kind of cool, spinning them around to find an access hatch then removing a computer chip and hacking it before putting it back. I did run into one situation where I was supposed to hack the Zitadelle but the crowbar was not on my workbench. I actually had to exit and restart the game to make it reappear. Normally any dropped item will reappear in its starting location after a few seconds. Another ridiculous error happened at the very end of the game where I was yanked from my pilot station and lowered to the office level where I was supposed to pick-up dual machine guns and defend my desk. Neither of the guns fired so I basically sat there while enemy soldiers shot up my desk until the credits started to roll. Was zum Teufel!! 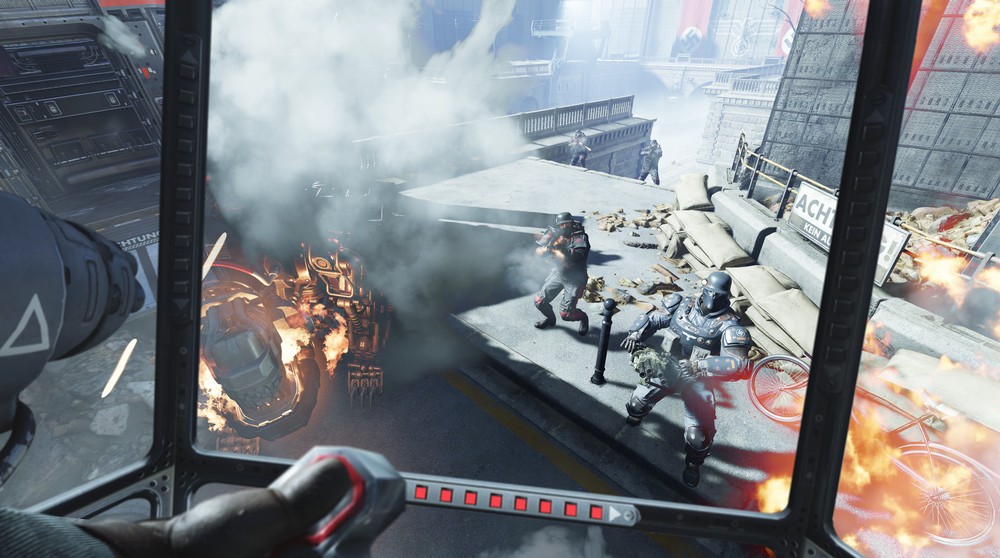 The gameplay in Cyberpilot is a joke. Each of the three robots have unlimited ammo with variable cooldown timers. They are also virtually indestructible as you have unlimited healing available as long as you take a moment to summon your repair bots to replenish your health bar. You basically just stomp around unloading your flamethrower or rockets and chain gun depending on what you are driving. The Drone offers a bit of stealth gameplay, as you can sneak around and try to zap unsuspecting Nazis and hack data terminals by twisting your wrist back and forth like you are cracking a safe. There is nothing tactical or even thought-provoking about the combat in Cyberpilot.

Technically, Wolfenstein Cyberpilot is not very attractive. My RTX2080ti card was putting out graphics that looked like the early days of PSVR before the PS4 Pro released. Everything was really fuzzy with poor draw distance, low detailed textures, and lots of jaggies and shimmering edges, and this was with everything set to Ultra. The game looks pretty good on the normal screen; pretty much like you see in trailers and screenshots, but the VR graphics are downright atrocious and even a bit nauseating – and I never get sick in VR. There is also this jittering when panning the view from side to side as framerates sink into the teens. Even just standing still the world can flutter around you as if the game can’t track your position properly. At first I thought it might be the built-in cameras on the Rift S so I switched to the Vive and my external room-scale cameras, but it didn’t get any better. I was also puzzled that you cannot pan the view with the right stick; instead you must move the entire controller left or right to pan the view. There was no head track targeting; moving your head only moved your view within the control room. 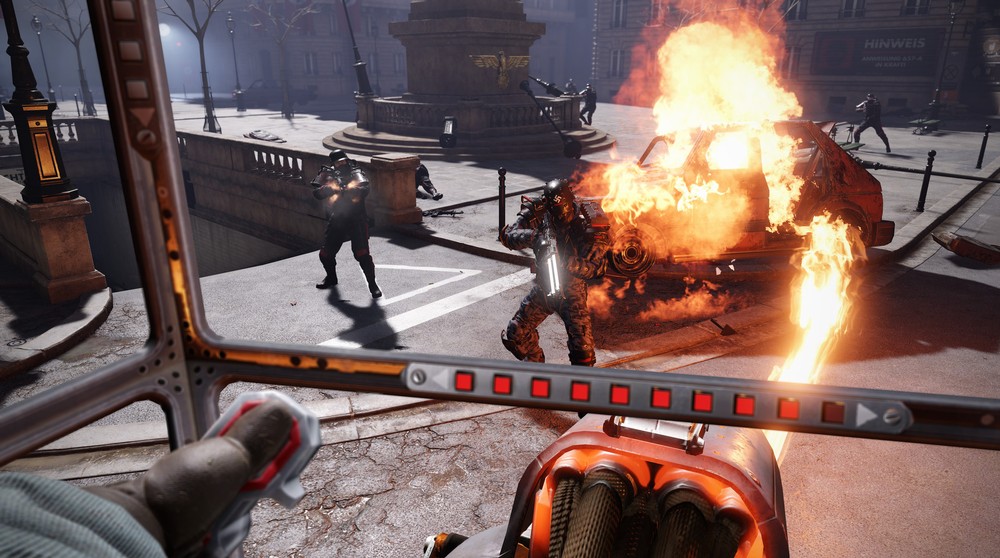 And this leads to my biggest complaint, the added level of disconnect you have while playing. You put on your VR headset to assume the role of a pilot sitting in front of a giant triple-monitor display that shows you the view of a remote controlled war machine. There are no unique cockpit views or sense of scale, so all three vehicles look and play alike.  I’ve already got a giant double-monitor display and a 75″ HDTV so why do I need VR to simulate my own space. This entire game could just as easily have been done in non-VR and looked a whole lot better doing it.

Wolfenstein Cyberpilot is a huge missed opportunity. The obvious lack of official Oculus Rift support is turning off thousands of potential gamers who might not know the game actually works with a Rift or Rift S, but the game struggles most with its simplistic on-rails design and trigger-mashing combat with no real threat or danger of possible death unless you are too careless to heal yourself between encounters. The busy work between chapters is just that; busy work to inflate a game that is barely long enough to be classified as a demo, let alone a full $20 game. This is a $5 (maybe $10) VR experience at best.

I will admit to enjoying the trivial tie-ins to Youngblood, and when the screen was clear and stable enough that I wasn’t fighting back the urge to hurl I will admit to enjoying the simplistic action, much in the way I enjoy linear on-rails games like Time Crisis, etc. If the developers want to clean-up their tech and actually add in some gameplay content beyond the tutorial I would be happy to play a “real” Cyberpilot game. Until then, there are much better games of this genre available for VR that already exist and many cost less. Sparen Sie Ihr Geld für etwas Besseres.