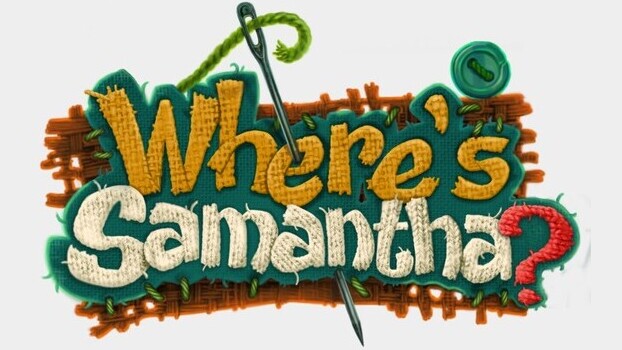 Fantastic platformer loaded with charm and oozing with style.

Textiles and fabrics have an interesting way of weaving themselves into our video games.  Titles like Kirby’s Epic Yarn, Unravel, Woven, and of course the half-dozen Sackboy adventures on various PlayStation systems all prove that there is an undeniable charm in playing video games rooted in the arts and crafts culture, and Where’s Samantha? is no different.  This 2D side-scrolling platform/puzzler is not only a joy to play; you’ll continually find yourself getting lost in the intricate details and thoughtful use of sewing and crafting to construct these magnificent levels.

At the heart of this magical adventure we have a storybook love story actually being read to us from a storybook.  After the narrator finishes you turn the page to open an exciting and creative world of fun and danger created mostly from real world items.  The backdrop is burlap with swatches of other fabrics to blend in and create the actual levels.  You have flowers created from string stems and button blooms.  Combs are expertly placed to offer a spiky death if you fail to slip under or used to construct deadly fan blades.  Wool socks shoot streams of steamy air into the world that can hurt or help you depending on the situation, and pushpins serve as levers to control machinery. 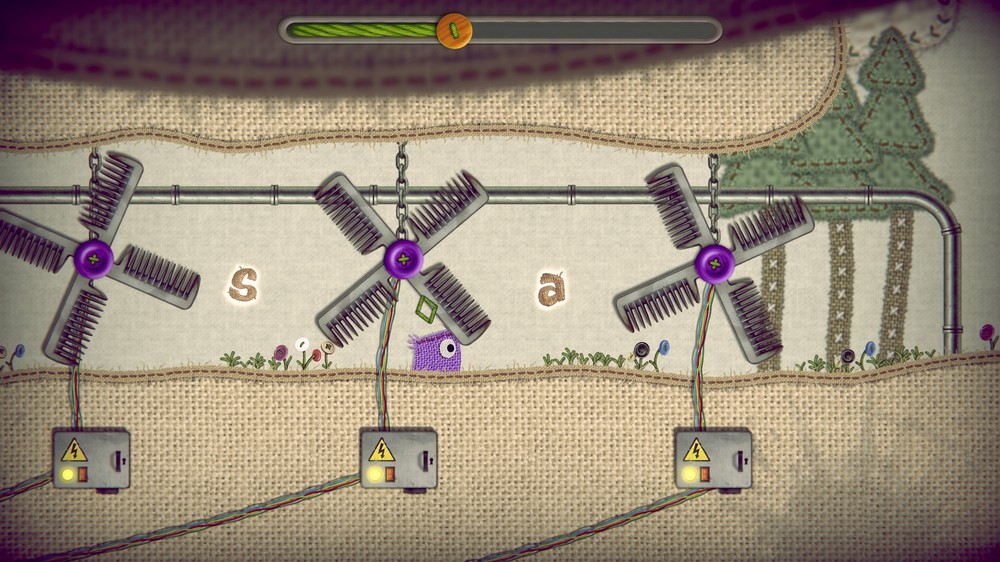 But back to that love story.  It seems George and Samantha have been separated.  Sam has vanished and George sets off to find her; a quest that will span 45 ingenious levels containing inventive puzzles and deadly traps.  Like the world he explores George also fits into the craft design theme.  Actually, he is just a small red swatch of fabric with a single eye that blinks in wonder, but thanks to some cool puzzle designs that make use of size, color, and weight, George has a few tricks up his sleeves.  George is able to consume these dangling bits of thread to add to his mass, effectively doubling or tripling his size and weight and change his color.  Twice the size he turns blue and triple the size is purple, and later in the game you can actually find other more subtle shades required to solve more complex puzzles.

Once George has increased his size he can then separate back into smaller pieces, so if he starts as small (red) his medium size (blue) could break down into two red swatches, and a large (purple) could break down into three reds or a blue and one red.  You can switch to any of these pieces and control them independently. The puzzles are designed entirely around this concept with ledges, springboards, and buttons that are color coded for weight.  George’s movement and jumping are also affected by his current size, so his purple form can barely get up a hill while his smaller red form is able to zip around and avoid dangers.  This is tested multiple times in situations where George must break down into smaller, faster parts and travel across a dangerous area in two or three trips then reassemble on the other side.  In other puzzles multiple buttons need to be held down simultaneously or maybe one swatch needs to ride a platform while another swatch works the control lever.  This probably all sounds ridiculous while reading me trying to describe it, but the system is so intuitive and works so well you will instantly feel comfortable with the game after just a few levels. 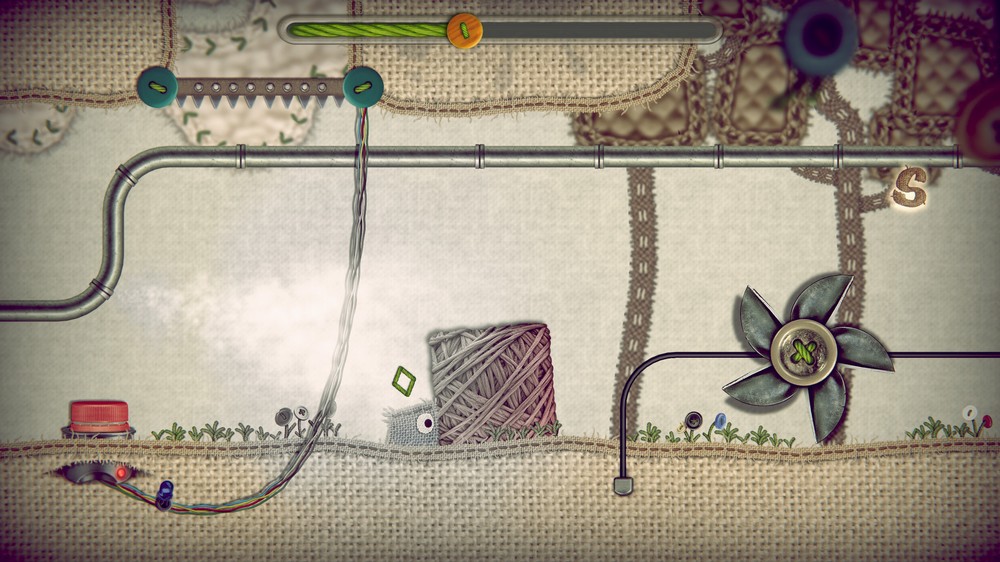 My only minor issue with Where’s Samantha is that despite having 45 levels I never felt challenged until around the final 10-15 levels.  Everything up to that point, while amazing and fun, didn’t really test my problem-solving abilities, and despite levels that are only 3-5 minutes long I started to lose my momentum around level 20.  The linear nature of the level design meant no secondary paths or hidden areas to explore for those collectible letters.  Puzzle pieces and critical parts of the environment are all color coded so you know what form you need to be in to progress.  I can only assume that the fanciful nature of the game design and the lack of puzzle difficulty meant the designers were targeting a younger audience, and that is perfectly fine.  Kids need games created for them (even when the story does touch on quantum theory and time travel), and I still had a great time.

I have no idea what resolution this game is running at; there are very limited options available and no resolution settings, but given the VGA card and other systems requirements straight out of 2010 there is no reason that any PC still functioning today couldn’t run this game.  I was impressed that it looked as good as it did on my 4K setup with great texture details in the fabric and no blurry image from upscaling. 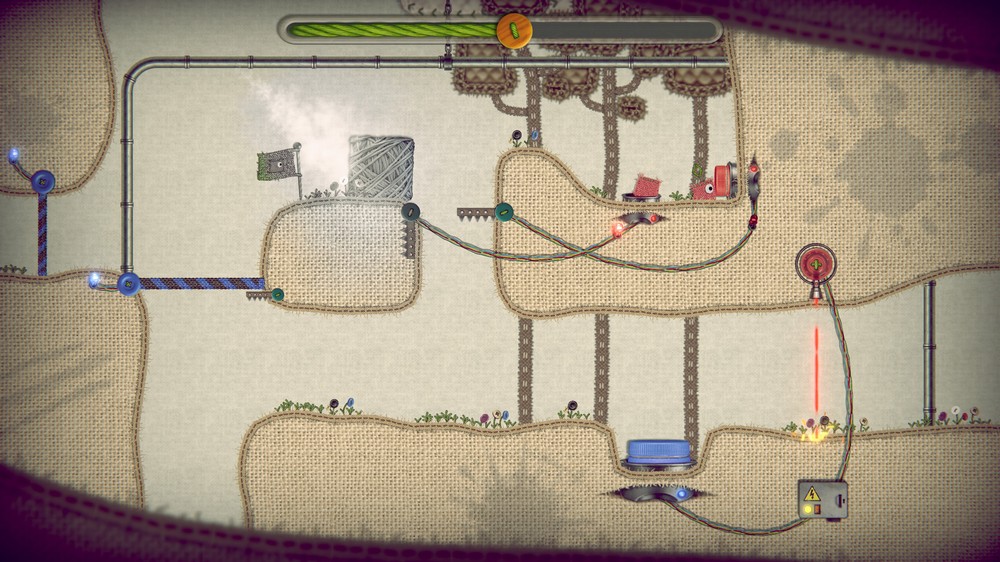 In addition to the charming graphics is a wonderful soundtrack, great sound effects, and some great narration from Rufus Hound that will have you hanging on his every word.  While keyboard and mouse are supported you’ll have a much better time with a gamepad and frequent cloud saves will bookmark your progress.  While playing the game there are frequent flagpole checkpoints, so you never have to play too much over if George falls victim to a trap or bottomless pit.

Where’s Samantha? is a fantastic platformer loaded with charm and oozing with style.  While lacking the challenge more seasoned gamers are looking for, anyone with a soul will still have a magical time exploring this world and helping George to reunite with Sam.  This is definitely one of my favorite indie titles of 2021 and a great fit for anyone looking for some wholesome family fun.