What Remains of Edith Finch Review – Xbox One 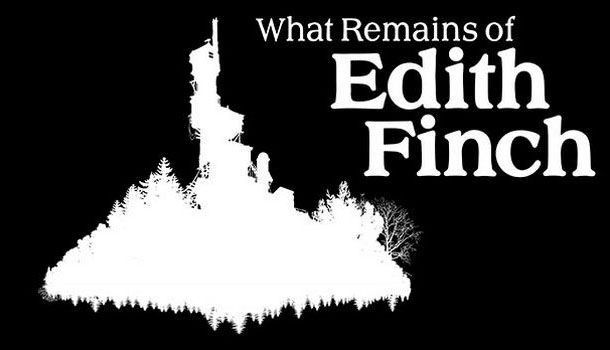 + An excellently delivered story, both narratively and mechanically
+ Well-paced, with a great variety of things to do and see

- A little short in length

A narrative experience that's fresh from start to finish.

It’s not very often that I play a game from start to finish in one sitting. Partly this is because most of the games that I play are open-world, with a length that doesn’t allow for completion in less than a couple of weeks of regular play, but the main reason is that it’s pretty rare for me to find a game with a narrative that’s compelling enough to encourage me to continue playing for a long period of time. In the case of What Remains of Edith Finch, the controller didn’t even leave my hands from the beginning of the game until the credits rolled, and there are a number of reasons, aside from the excellent story, that this was the case.

What Remains of Edith Finch was developed by Giant Sparrow, the developer that some of you many know from The Unfinished Swan, which released on PlayStation 3 back in 2012. Like The Unfinished Swan, Edith Finch falls in the genre that is sometimes disparagingly labeled as a ‘walking simulator’, though, in the case of Edith Finch, this particular moniker is perhaps as inaccurate as it can be for a game of this type. This is thanks to the many sequences that fall into a more typical videogame format, such as platforming, flying, RPG-exploration, and First-Person combat. 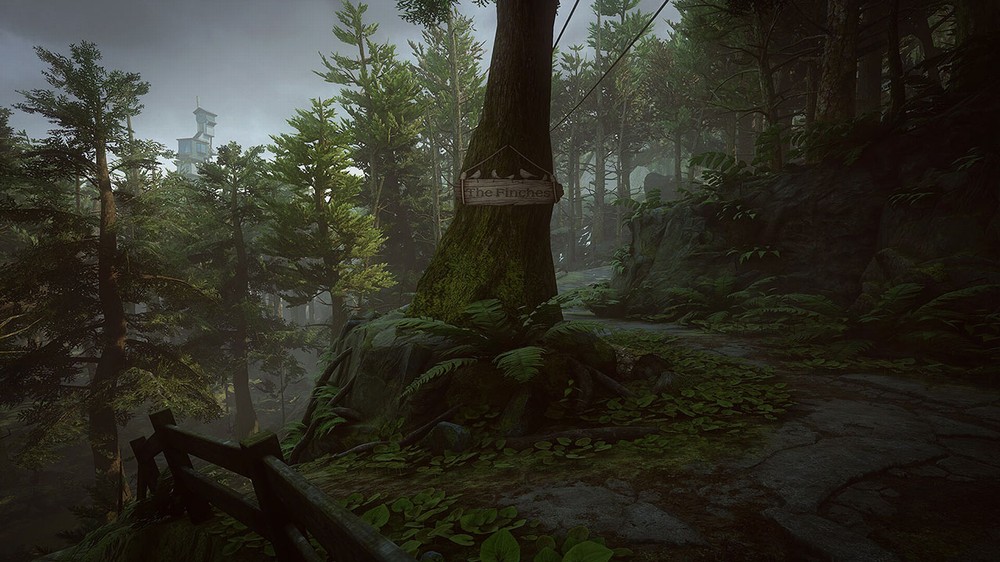 Edith Finch’s journey begins in a similar way to Gone Home, with our protagonist returning to a home in which they once lived, attempting to unravel the mysteries that lie within. After the first fifteen minutes or so of gameplay, though, the experience begins to differ fairly significantly. By making your way through the house, and its various secret passages (so far, so Gone Home), you uncover diaries and notes from the previous inhabitants of the house, who are all related by blood to Edith in some way. As you fill in the Finch family tree by reading these texts, you begin to reveal the curse that haunts the Finch family; each member dies before their time, and the passages that you read outline the final moments of their lives.

As you read more about the Finch family, and begin to fill in the family tree (both literally and figuratively), the history of the family begins to fall into place, and the events of one family member’s account can provide much needed context for family members that you’ve both encountered previously and are yet to encounter. Subtle clues are laced through the environment too, such as chairs stuck high up in trees, that you later learn were flung there by a giant storm in the middle of a wedding. The story of What Remains of Edith Finch resembles the peeling of an onion; as each layer is peeled away it adds more and more richness to the experience. Even though each story is entertaining in its own right, what each part adds to the whole makes for a grander experience that only grows as the game progresses. 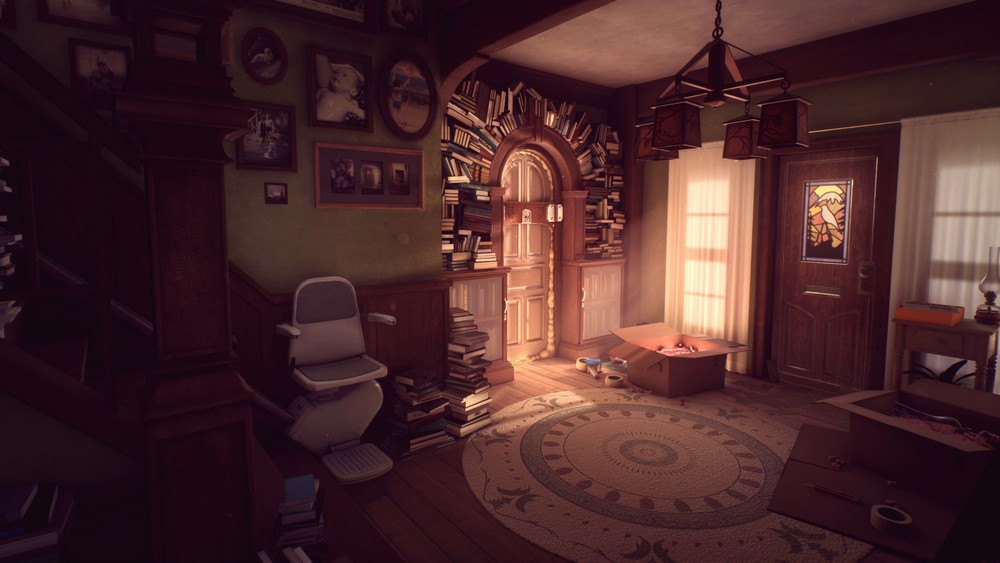 The delivery of each story is part of what makes Edith Finch so compelling, and it’s the simplicity of each sequence that encouraged me to continue playing, as I was so intrigued by what would come next. It sounds a little gushing, but I labeled each segment as my favorite, up until the point that I started the next one, where I realized that what I was currently doing supplanted the previous experiences in my mind. Looking back at the game upon completion, it dawned on me that I enjoyed every single aspect of the game, which isn’t something that happens all that often. From swimming as a shark, to acting out a horror-inspired comic book, the individual stories in What Remains of Edith Finch make for a varied experience, and provide enough of a break from exploring the house that even walking from point-A to point-B feels fresh each time it is re-employed. Each section lasts just long enough for you to get a feeling for it, and to get a grasp of the controls, and then it leaves you, ensuring that you’re never performing a single task for so long that it overstays its welcome, but that you’re still getting a strong feel for what the games is telling you.

One of the strongest aspects of What Remains of Edith Finch is its art style and visual direction. The initial segments of the game, walking up to the house and finding your way to the first diary entry, provide a good sense of mystery, even if the visuals themselves are perhaps a little mundane. However, Giant Sparrow has done a great job of making each family member’s story feel distinct, and in doing this, they’ve made the main crux of the game, where you play as Edith, feel similarly unique from the rest. From cel-shading and isometric viewpoints, to underwater segments and getting lost in fog, each member of the family has their own personal story to tell, and this is shown as much in the graphics as it is in the tasks that are required of you. 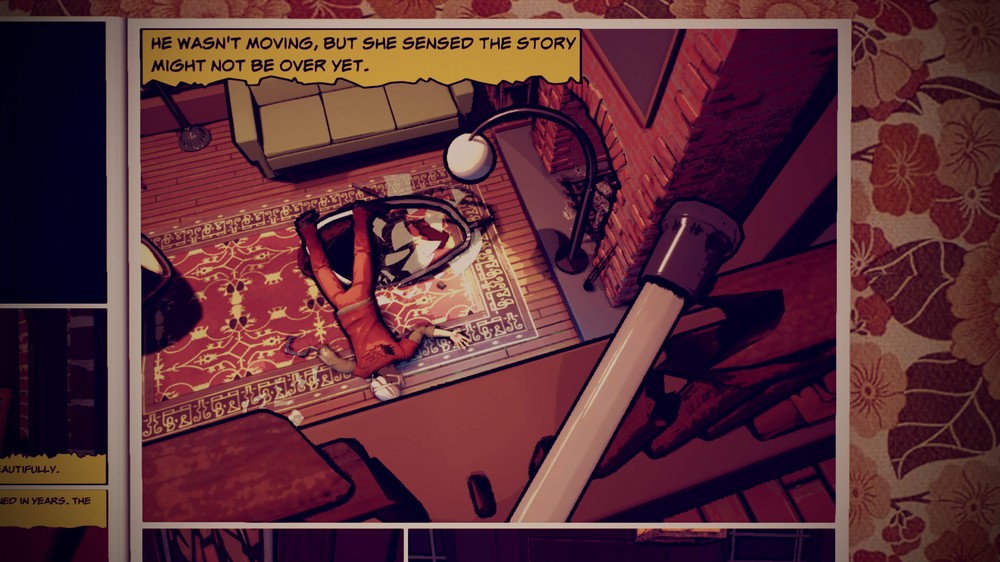 This strong visual direction continues in the subtle signposting that the game provides to you. Though there are fairly obvious markers to indicate which objects in the game are able to be interacted with, I was most impressed with the narration, which is delivered is both audio and text formats. The text appears to hang in mid-air, and directs you towards where you are required to be, and once the audio narration is finished, the words gather up and fly off in the direction that you are supposed to go next, leaving you to literally follow the narrative through the house. It isn’t obnoxious or obvious enough to resemble a trail of breadcrumbs holding your hand through the experience, but it does mean that if you are unsure of where to go next, Edith Finch will give you a little nudge in the right direction.

What Remains of Edith Finch is perhaps one of the strongest examples in modern gaming of the power that videogames have to deliver narratives, and the unique aspects that gaming brings to the table that offer this medium the ability to tell stories in new and powerful ways. One such example of this, that I’ll try not to talk too much about for fear of spoiling it, happens about half-way through Edith Finch, where the family member whose story you are currently experiencing is having so much fun at the time of their death, that it makes the already heartbreaking tale at the core of it even more emotionally devastating. There has been plenty of negative talk over the past few years about games such as Grand Theft Auto where the actions that you’re performing on screen don’t match up with the general feel of the story, and while this is true in this particular segment of Edith Finch, it’s a positive employment of the technique, a deliberate story-telling device that makes the sequence that much more powerful. 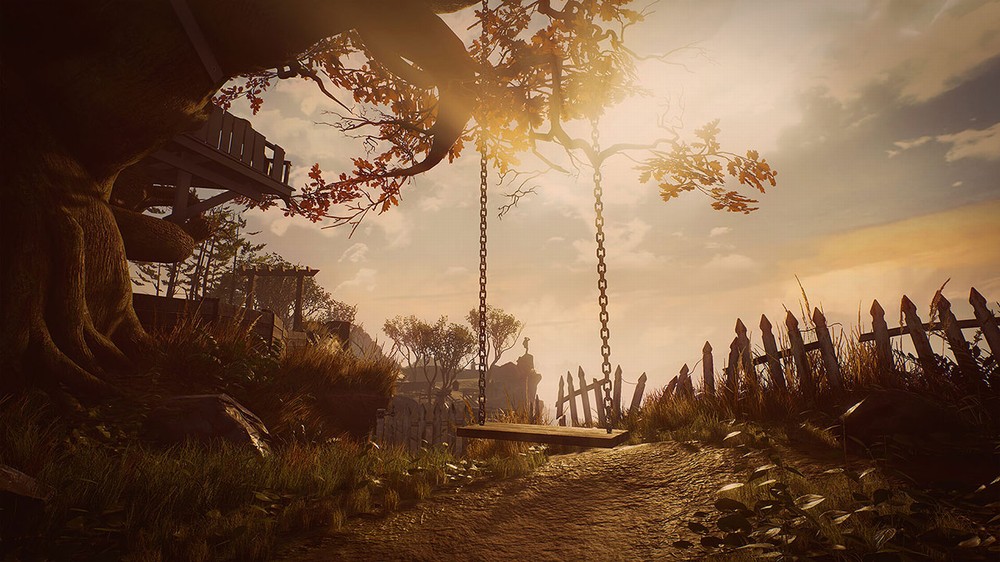 Though my opinion of What Remains of Edith Finch is clearly overwhelmingly positive, I am aware that there are aspects of the game that won’t appeal to everyone. It’s a slow game, with narrative beats delivered at a casual pace, and the delivery of some of these beats are subtle enough that they may pass some players by. It’s also not a long experience, evidenced by my ability to finish it in a single sitting, which probably only totaled about two to three hours. However, those two to three hours offered up a consistently strong experience, comparable to a good movie, and I’d happily play through more games of this length if they offered up an experience this enjoyable and resonant. 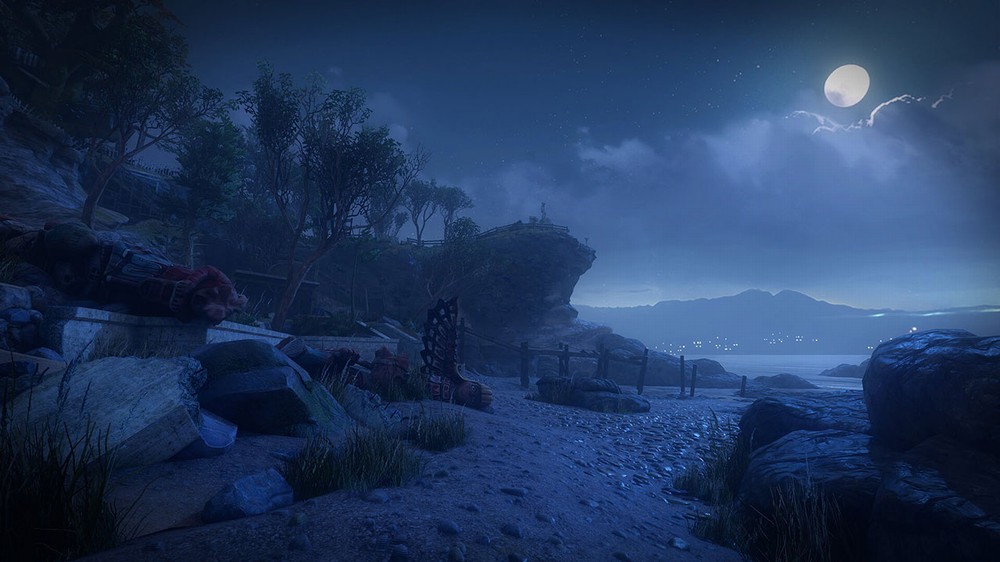 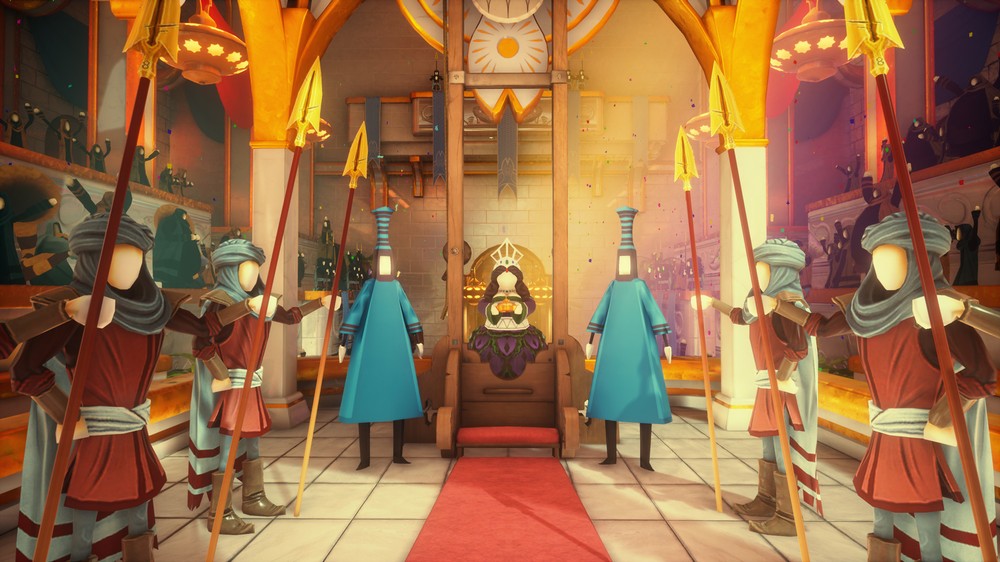 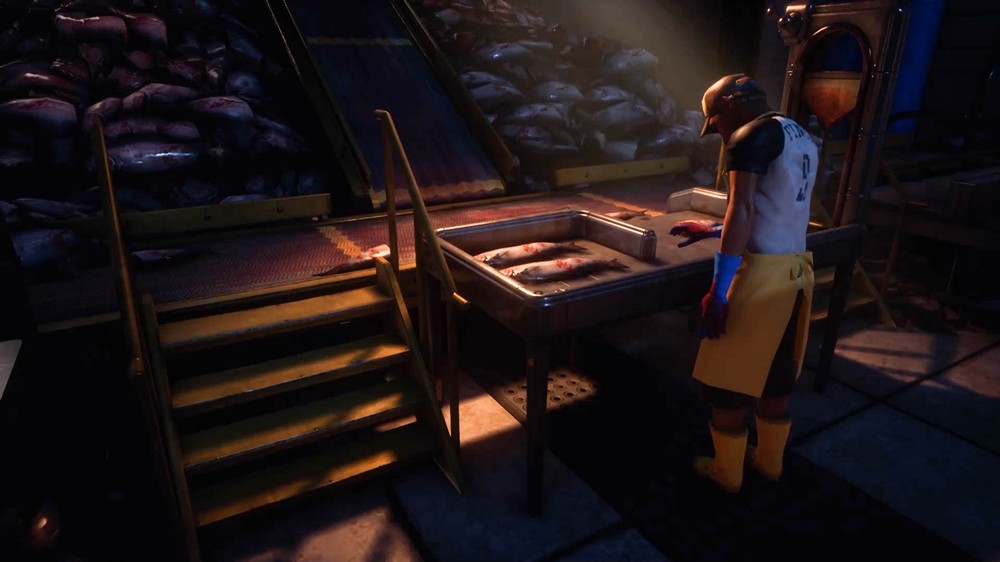 1
880
The Walking Dead: Saints & Sinners Review – Oculus Quest
2
751
The Falconeer First-Look Preview – PC
3
751
Metamorphosis is 33% Off on Steam!
4
751
Werewolf: The Apocalypse – Heart of the Forest launches on October the 13th
5
751
Synth Riders Celebrates Anniversary with a Month Full of Treats and an Oculus Ques...
6
751
Worm Jazz Review – PC
7
751
Take to the Skies and Choose a Side in the New Trailer for Next Generation Air Com...
8
751
CRASH BANDICOOT 4: IT’S ABOUT TIME IS AVAILABLE NOW
9
750
Frictional Games Shows Off First Gameplay Footage of Amnesia: Rebirth
10
750
Join the Galaxy’s Finest as Star Wars™: Squadrons Soars Into Homes Today
All Original Content on Game Chronicles is Copyright (c) 2002-2020
Sinjin Solves Walkthroughs Copyright (c) 1996-2020 by Mark Smith