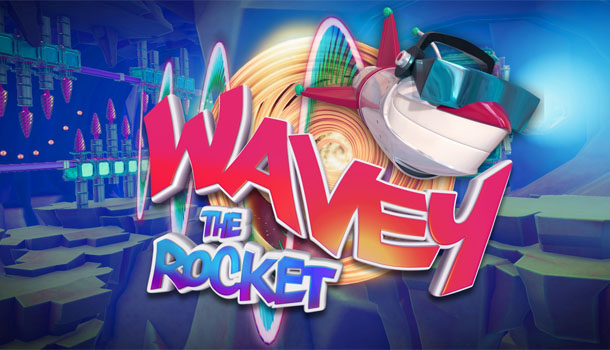 A conceptual masterpiece of gameplay with stunning visuals and an unforgettable soundtrack.

Wavey The Rocket is the quintessential game you love to hate (or hate to love); a precision side-scroller that defies my 40+ years of gaming prowess, a game, that for the life of me, I cannot seem to play beyond the first dozen levels – and there are more than 80 in the game. I’m sure the game is eventually going to click and I’m going to have a blast, but for now I really don’t like this game – or rather I don’t like myself for not being able to play it. The game itself is a work of genius, a conceptual masterpiece of gameplay with stunning visuals and an unforgettable soundtrack composed by Thomas O’Boyle coming later this month.

You’ll be playing as Wavey, a sentient rocket that looks more like a shark than a weapon of mass destruction. Wavey loves his “So Dope Pop” but an evil corporation is going around removing all the fizz from your favorite drink, so Wavey sets off to fix this carbonation disaster. Games like these rarely need a story a Wavey The Rocket is no exception, but given the charm and humor contained within the opening cutscene, as well as all the interactions with adorable characters throughout the game, I do appreciate the effort.

It would be easy to confuse Wavey The Rocket with a simple side-scrolling shooter if it weren’t for the simple fact you don’t shoot; remember, you are the rocket. In perhaps one of the most breakthrough moments of originality you control Wavey indirectly by plotting his flightpath in real-time by adjusting the oscillation of a sinewave using the analog sticks or the triggers on your controller.   By using the left stick to increase or flatten the curve you can control Wavey’s speed, and using the right stick will adjust the height of those curves allowing you to create a rollercoaster path through increasingly crazy environments. Not only do you need to adjust your curvy path to match the numerous collectibles in each level, there are also gems tucked away in hard to reach areas that must be collected, so you can unlock future zones and levels.   Your curvy flightpath can also be temporarily interrupted with a Dash move that shoots you left or right in a straight line for a brief moment; great for collecting certain items or zipping through a narrow passage. You only get three dashes to start, but you can collect dash pick-ups to reload empty dash sockets. 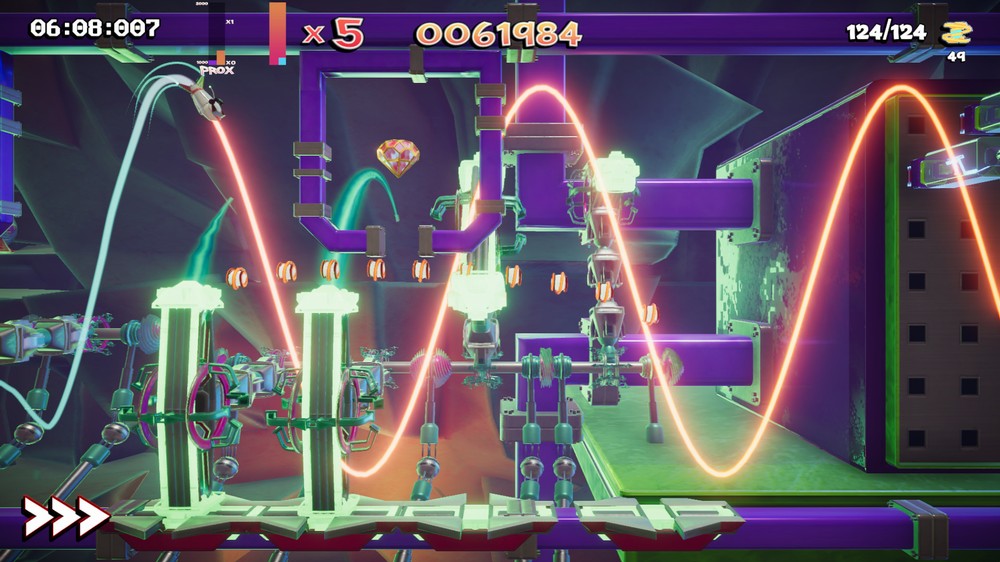 Wavey is in constant motion and despite being able to adjust his speed by tweaking the frequency of the wave form he is almost always moving too fast, forcing you to reverse direction back and forth as you tweak the wave to bypass obstacles and pass through collectibles. For me, the game lacks the smooth flow I think the designers were hoping for. Remember how good it felt nailing those super-fast Sonic levels and how bad it felt when you stumbled and lost all your rings? There is a lot of stumbling in Wavey The Rocket…at least for me. Thankfully, the game has instant respawns, so when you do die you are right back in the action – sometimes a bit too fast or too close to an obstacle that is going to kill you again.

The game tracks your score and completion time for each level, so it’s up to you on how to balance the time spent in each level going for 100% collection versus shaving seconds off your finishing time, although with no leaderboards the game lacks a much needed competitive spirit. Aside from besting your previous scores the only real driving force to replay levels is collecting the gems to unlock new areas of the game. Thankfully, the game is so darn adorable that it keeps me coming back over and over no matter how many times I smash into a wall. Any other game where I sucked this bad I would have given up on long ago, but Wavey is almost criminally addictive. A big part of that is the funkadelic soundtrack that is amazingly fresh and fits the theme of the game as well as the game’s pacing and eventual flow once I stop dying. 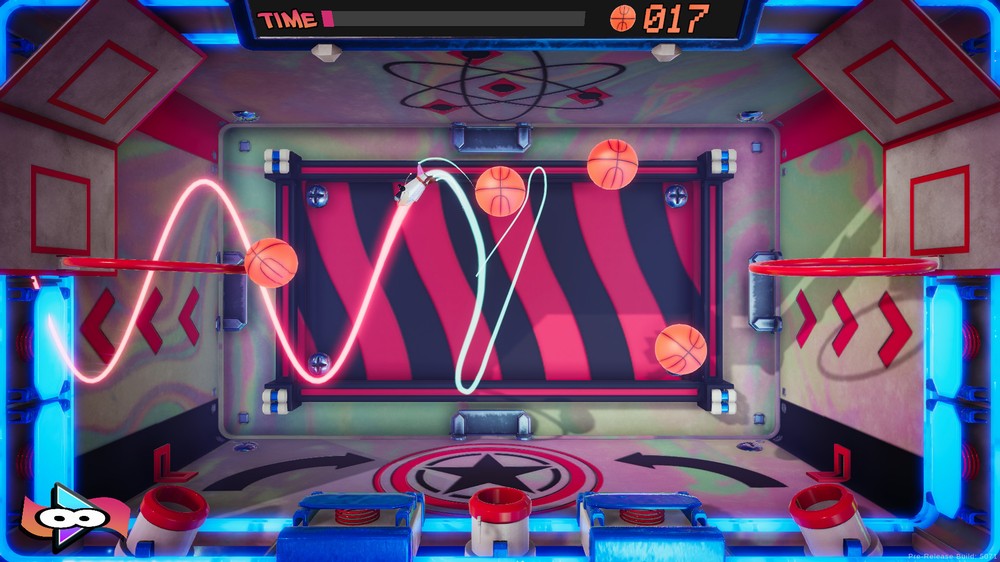 Wavey The Rocket doesn’t demand perfection, but it does reward persistence. You have infinite lives and you may need them all, but the game does reward your improved skills with lower completion times and higher scores, plus an overall sense of accomplishment the first time you finish a level without dying or maybe collecting all the goodies. You also have insane boss battles and some clever mini-games like trying to knock a basketball in the hoop by flying your rocket into it as many times as possible before the timer expires. Between levels you fly around this isometric neon-colored map interacting with characters and things before moving on to the next area/level. The art design in this map area is just as stylish as the gameplay levels with bold colors and smooth animation. Wavey The Rocket has modest system requirements and scales nicely to a variety of PC’s. My RTX2080ti was cranking out pristine 4K graphics as 60fps with all the settings maxed out. This is truly a visual feast for the eyes.

If you love addictive arcade side-scrollers and can overcome the steep learning curve figuring out the wacky controls then Wavey The Rocket might be the game of your dreams…or nightmares in my case.   I would never penalize or criticize a game simply because I suck at it. There is no doubt Wavey is an incredible game, both in design and presentation, and it’s addictive gameplay helps fuel my “one more try” perseverance. I will conquer this game if it kills me, and you can put that on my tombstone. 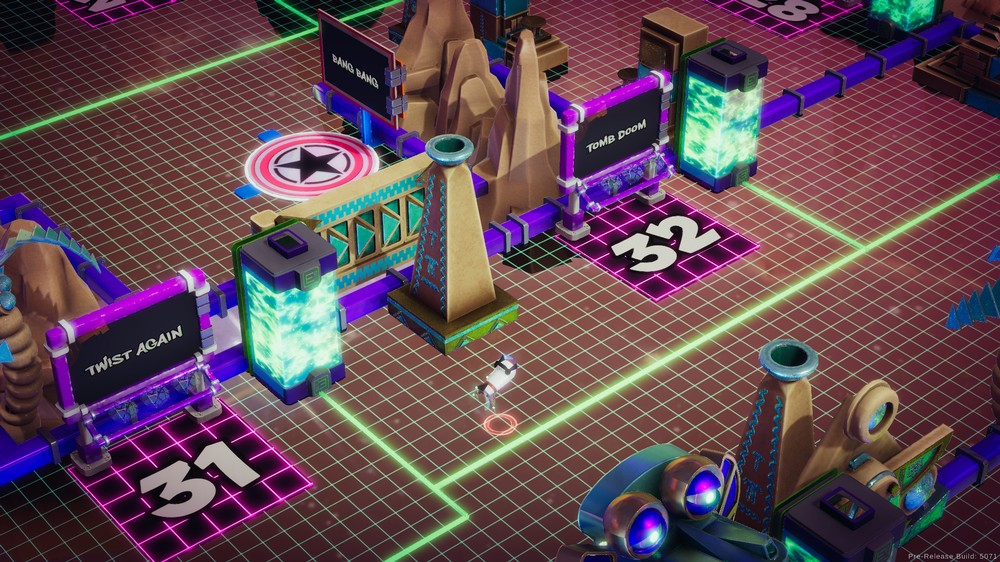 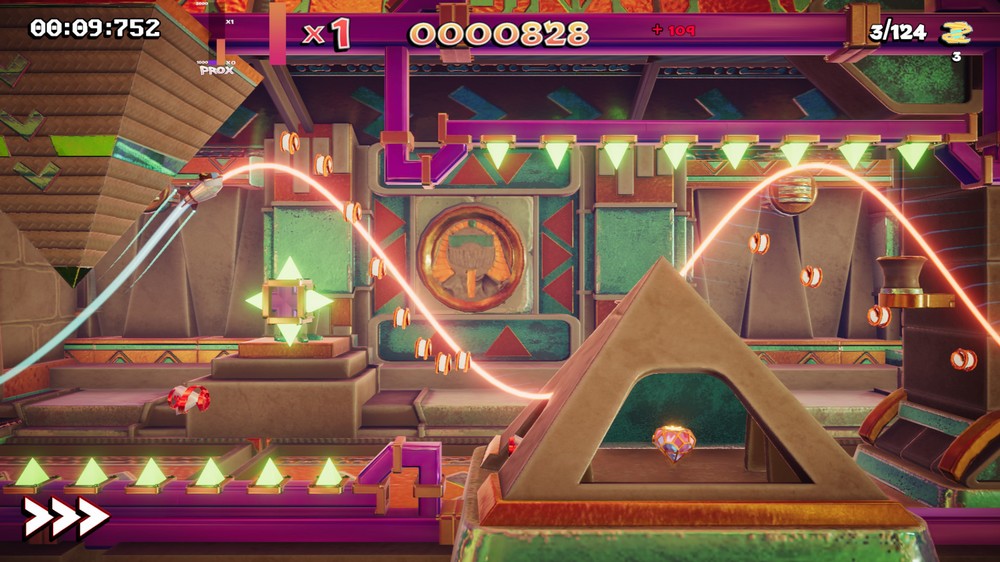 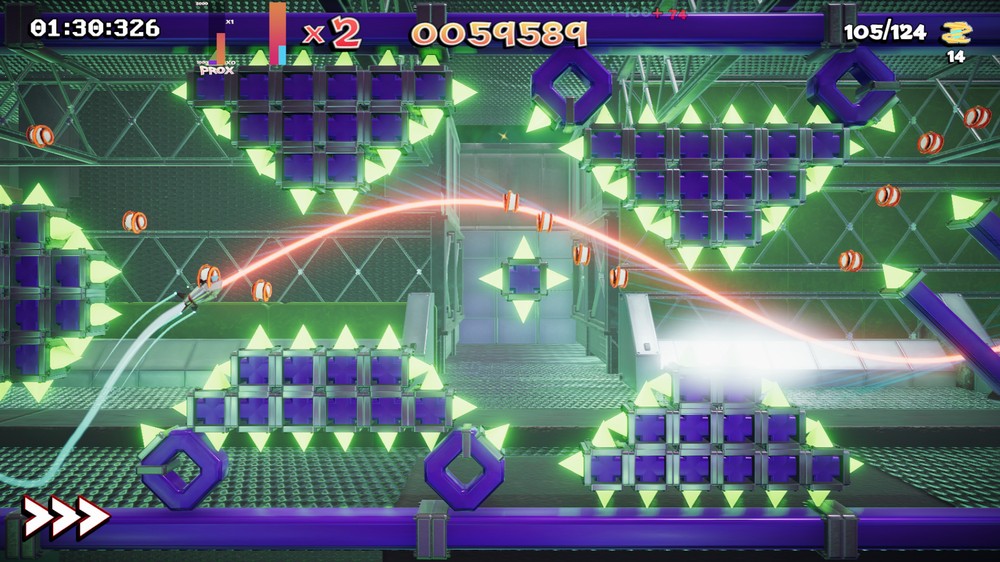 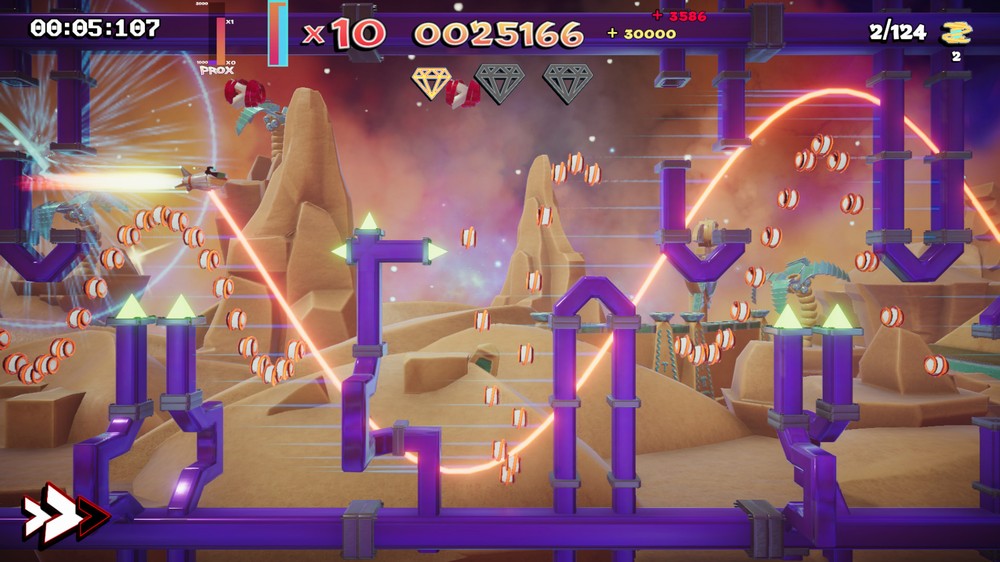