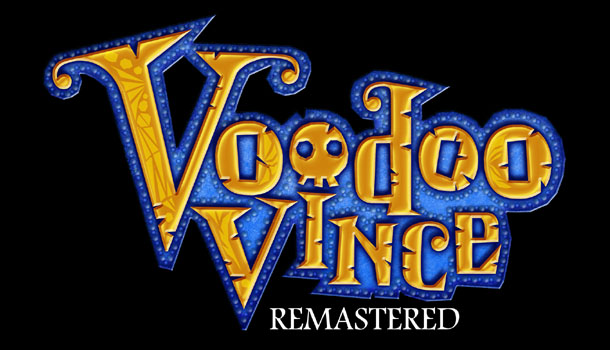 - Gets repetitive
- Bit of button mashing

It’s been almost 14 years since I played Voodoo Vince on the “original” Xbox, and with so many remakes, reboots, and remasters going on these days I have to admit I didn’t pay much attention when this was first announced. But after a week of playing this delightful platformer there is no denying the classic charm that Voodoo Vince brings to the platforming genre with his retro game-design charm and updated HD visuals.

Platform games are hard to find these days; good ones that is; ones that aren’t pixel-art or unpolished ports, and Vince brings all the core elements of platforming from a seemingly lost generation back into contemporary mainstream gaming on both PC and console in a game that will delight young and old alike. This is one of the rare remasters where enough time has passed that I actually forgot literally everything about the game, so jumping into Voodoo Vince: Remastered was a totally fresh experience. 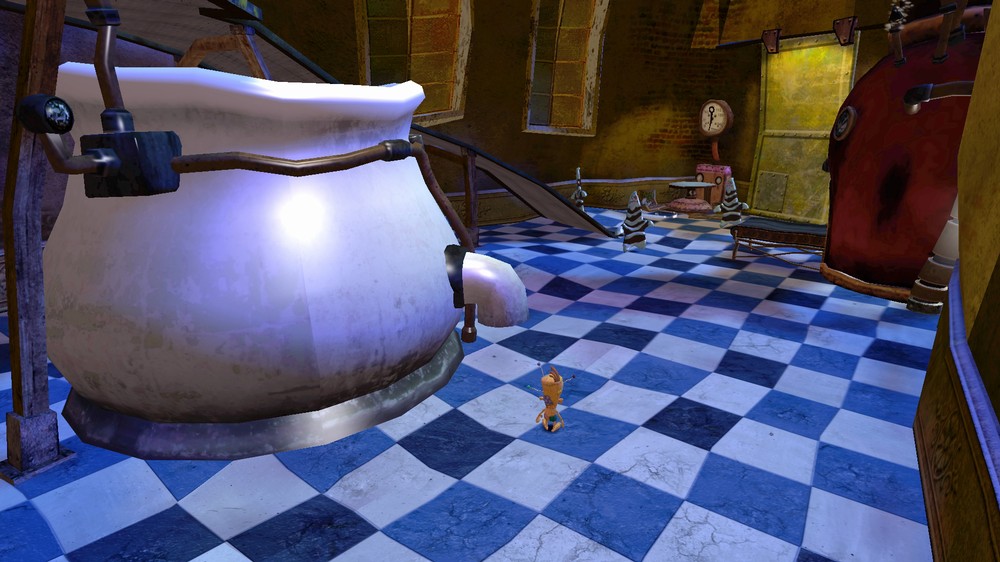 Voodoo Vince is one of those games that had to sound extremely cool and innovative during the early proposal and design phase of the project. What better premise than to “kick your own butt to hurt your enemies”. Toss in the eerie charm of the New Orleans French Quarter and one of the most loveable voodoo dolls you would ever want to meet and you have all the necessary ingredients for a fun and unconventional platform title.

Voodoo Vince turns the platform genre upside down with the unique concept of having you damage the primary character to effectively damage the enemies around them. This goes against everything gamers have been taught in the past two decades of gaming. You will find yourself fighting your natural instinct of self-preservation to intentionally harm Vince and thus defeat his foes.

As you can imagine, this sets up some hilarious possibilities for both the designers and the gamers. You’ll actually find yourself seeking out hazards and traps rather than avoiding them. It’s this kind of ingenuity the platform genre continues to lack even to this day, but herein lies the games only problem. Once you have experienced and exhausted this self-abusive concept (about 3-4 levels should do the trick) you are left with a fairly standard platform title that ultimately plays out like every other game that’s come before it. 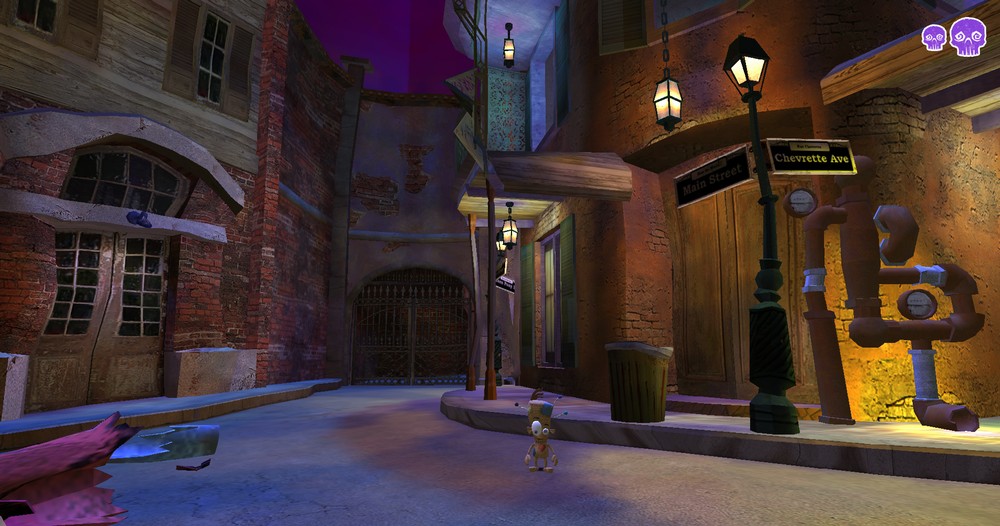 Veteran platform gamers will still enjoy the traditional concepts of collecting endless pick-ups, driving around in some cool vehicles, and engaging in the occasional mini-game. Vince also comes with a modest arsenal of combat moves including a triple-punch combo, double jump, and powerful head stomp, all useful for dispatching the smaller enemies.

Vince will get to explore around 30 colorful and creepy levels like a graveyard, swamp, the French Quarter, and what game wouldn’t be complete without sewers? You’ll get to pilot a boat, sub, airplane, and even ride a rat. The levels are a bit too linear which not only prohibits exploration but also shortens the gameplay. You are literally led around from one objective to the next until you fight the boss then move on to the next level.

There are plenty of puzzles that range from terribly easy to average difficulty once you wrap your brain around the game design. There really aren’t any game-stoppers to be found, and even the boss battles are surprisingly easy to figure out. Combat seldom gets more complicated than randomly mashing buttons and boss battles are more about interacting with the environment than the actual boss. 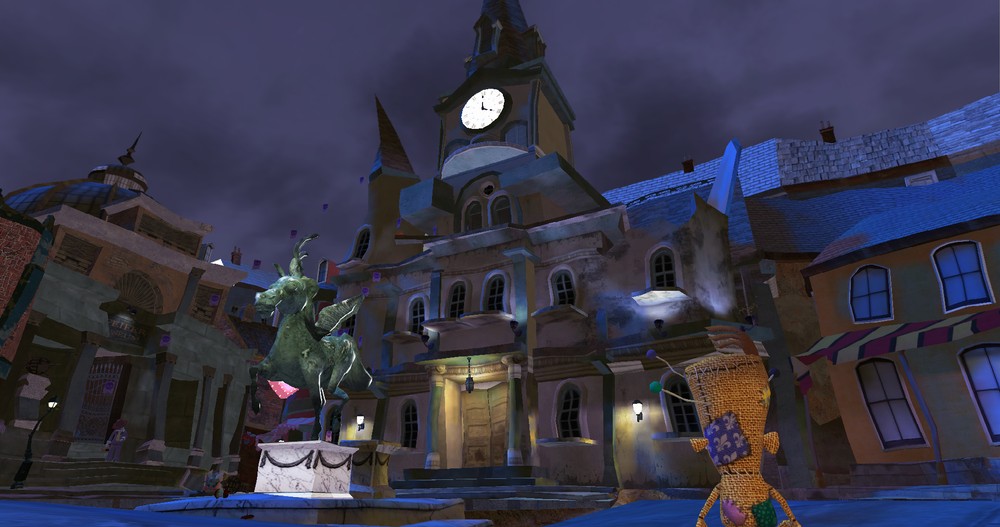 But then again, this is the nature of the game. Vince is this fragile little torn-up doll that couldn’t possibly do any damage without the aid of his voodoo abilities, and there is something that is undeniably charming about controlling the underdog and still kicking major butt, even if it is your own.

Voodoo Vince has one of those visual styles that you are either going to love or hate, Personally, I appreciated the unique visionary direction the art department took. Much of the game takes place at night or in dark areas so there is heavy use of purple and blue. This is accented with gold and orange from lanterns and fire that give the game a very surreal look.

Character designs are both creative and flawlessly funny. Some of the characters brought back memories of Grim Fandango, and Vince is perhaps the most fun and delightful character since Rayman.  He obviously inspired the Sack Boy character for LittleBigPlanet. His animation is hysterical as he flops around the screen, peels himself off the pavement or gets mangled in one of hundreds of deadly traps. He will often break the “forth wall” to look at the person holding the controller and make some goofy face of pain, despair, or indifference. 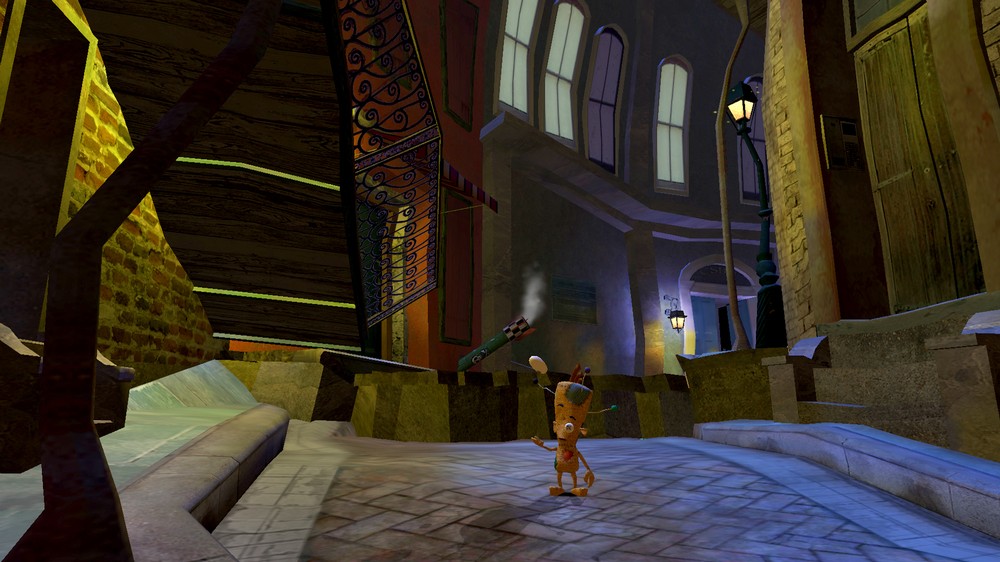 The HD remastered textures are crisp and exquisitely detailed. Zooming in on Vince will reveal the intricate burlap fabric of his body complete with seams and stitching while the environments and architecture are crated from stone, wood, brick, and other familiar textures. Special effects include heat distortion, reflections, amazing colored lighting, and more particle effects than you can shake a voodoo doll at.

The music offers an authentic Cajun flair that incorporates a bit of jazz and other orchestrations to evoke a fun and sometimes dangerous atmosphere. The tempo changes in times of danger like a boss fight and it can get pretty exciting. Even when it quiets down during casual exploration the soundtrack still manages to create the perfect mood that is more in tune with the game’s premise than the genre.

The sound effects are as magical as the graphics and include all the supernatural flair of voodoo effects that fit the visuals perfectly. The voice work ranges from the eerily authentic Cajun accent of Vince’s female owner to some stylistic cartoon voices of the rest of the cast. Everything is over-the-top and totally fun. 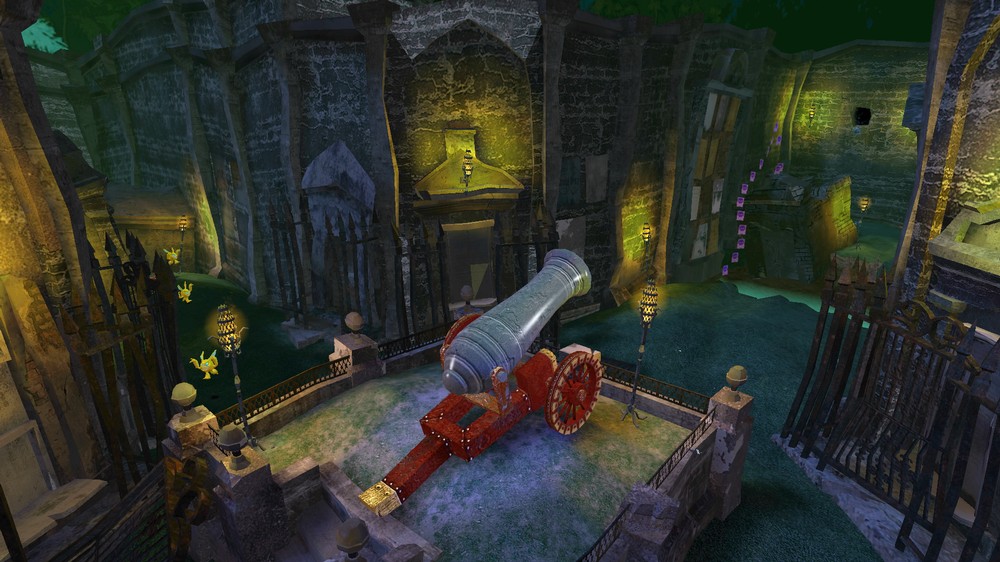 Voodoo Vince is arguably an easy game. Despite the Teen rating it was obviously designed with the younger gamer in mind. There are really no puzzles or bosses that will stump even the most novice gamer for more than 10-15 minutes. It took me about 10 hours over the course of a few days to finish the game the first time, and with no real reward system, multi-branching plots, or multiple endings, there is no reason to replay it anytime soon.

Even though Voodoo Vince quickly reverts back to the tried and true formula of platform gaming I still enjoyed the game for what it was. The concept of kicking your own butt was just as fun on level 30 as it was on level one and the audio and visual presentation is as tasty as a platter of Cajun fried shrimp. Voodoo Vince has to be one of the quirkiest and loveable platform characters ever, and this excellent remaster just goes to prove that voodoo dolls never die…they just come back with better graphics.

This review was based on the Steam version of game.  A Microsoft Play Anywhere digital download version is also available that allows you to play on Xbox One and Windows 10.

1
877
The Walking Dead: Saints & Sinners Review – Oculus Quest
2
749
Synth Riders Celebrates Anniversary with a Month Full of Treats and an Oculus Ques...
3
749
Worm Jazz Review – PC
4
749
CRASH BANDICOOT 4: IT’S ABOUT TIME IS AVAILABLE NOW
5
749
Frictional Games Shows Off First Gameplay Footage of Amnesia: Rebirth
6
749
Join the Galaxy’s Finest as Star Wars™: Squadrons Soars Into Homes Today
7
748
Metamorphosis is 33% Off on Steam!
8
748
Werewolf: The Apocalypse – Heart of the Forest launches on October the 13th
9
748
Take to the Skies and Choose a Side in the New Trailer for Next Generation Air Com...
10
748
The Falconeer First-Look Preview – PC
All Original Content on Game Chronicles is Copyright (c) 2002-2020
Sinjin Solves Walkthroughs Copyright (c) 1996-2020 by Mark Smith