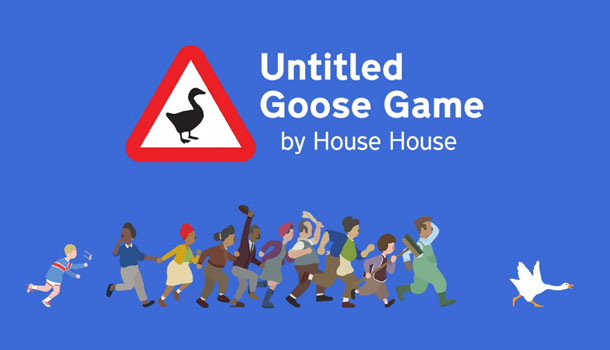 Original and totally delightful adventure terrorizing a small village as a goose.

Untitled Goose Game gets props for not only one of the more creatively named games of 2019 but also one with the most creative gameplay; mixing, action, adventure, puzzles, and even a bit of stealth to create a Looney Toons version of a Hitman game…without the death. The setup is simple.   It’s a lovely day in the village and you are a horrible goose. For whatever reason, you seem to hate humans and have prepared a meticulous list (fantastic penmanship by the way) of mischievous goose activities to screw with the entire village, one section of town at a time.

This review will be impossible to write without at least one or two examples of gameplay, which will undoubtedly turn into minor spoilers, so be warned. The game kicks off with a HONK as your goose emerges from the bushes and proceeds down the path to the park complete with lake, bench, and a picnic lunch in need of assembling. At any given time you can bring up your To Do list of objectives and collectibles, and those goals will be checked off as they are completed. Each area offers a new list of activities specific to that location as well as a collectible quest, like gathering picnic supplies in the first level or doing a bit of shoplifting in the second. 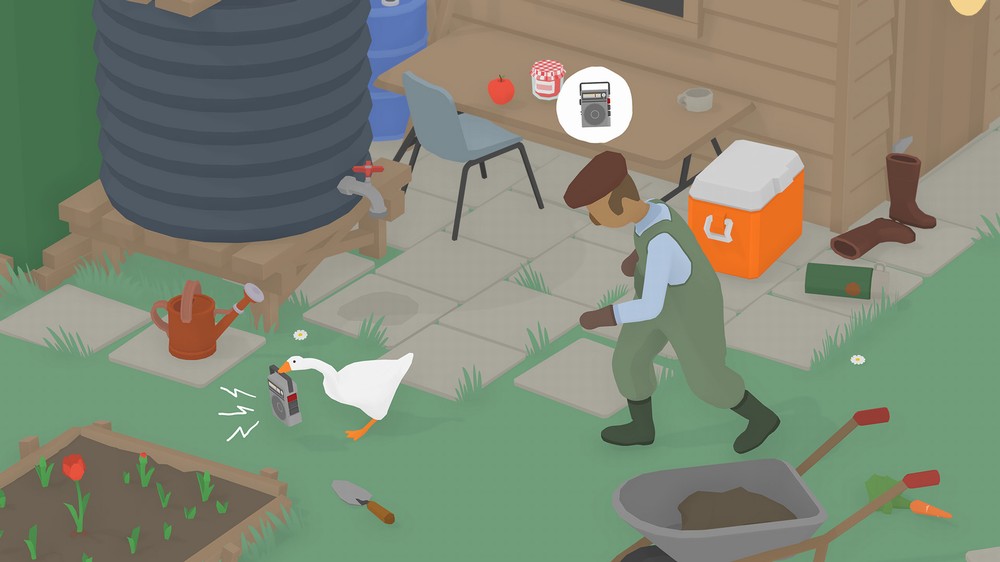 Some objectives are simple while others take a bit more thought and planning and others are totally secret objectives that are left to accidental discovery or researching a strategy guide online. There is some pretty random stuff to do in this game that you would never think to do in a million years like opening an umbrella indoors. Even the more obvious activities will still take some trial and error to figure out the proper sequence of events and the timing.   Early on you are asked to get the gardener to change hats, which means you have to steal the one he’s already wearing, which means you’ll need to get him on his hands and knees in an area where you can sneak up and snatch his hat and then run away before he can grab it back.

Controls are excellent with dedicated buttons for honking and flapping your wings which, when used together, can be quite intimidating; especially to young boys with poor vision. You also have a sneak button that lowers your neck and has you skimming the ground, sneaking under and behind objects or hiding in bushes waiting to strike. The run button will boost your speed but never enough to outrun most humans in the game unless you have a good head start, and your ability to turn sharply is negated while running. 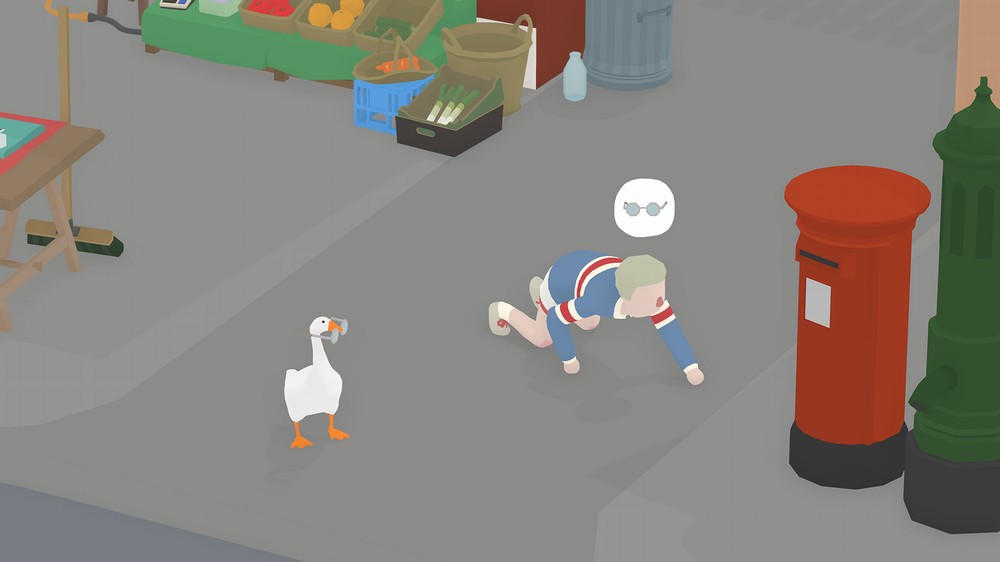 The AI for the humans is fairly predictable as they go about their daily lives creating unique yet repetitious patterns for you to figure out and insert yourself into to complete your objectives in each area before moving on. Cloud bubbles with item icons will appear above their heads indicating their next task or perhaps an observation of something missing or out of place. Every item has a place and you can use that to your advantage for messing with the humans. Once you have completed the objectives on your list a scripted event will take place that allows you into the next area. Eventually, you can unlock gates that will allow you to circle back to all the areas of the contiguous map so you can tackle those lists of hidden challenges. You may have tripped that kid back in town, but did he fall in the puddle? Try again.

The presentation for Untitled Goose Game is simplistic perfection with stylized and intentionally simplistic graphics that look like a first-gen SIMS game. The faceless characters manage to emote with pure body language and mime-like gestures and charming animations. The goose is wonderfully animated in all his motions; waddling, running, swimming around the lake in circles, or poking his head out of a bush like a periscope. And all of these charming animations and graphics are accompanied by a delightful soundtrack like something you would hear while watching an old-time silent movie. Bubble icons match in-game items, so you can figure out what items are useful in the world.  The interface is clean and simple, and as I mentioned above, that goose has some fine penmanship. You can even use the bumpers to zoom the camera in and out of the level to appreciate the details or just get the bigger picture. 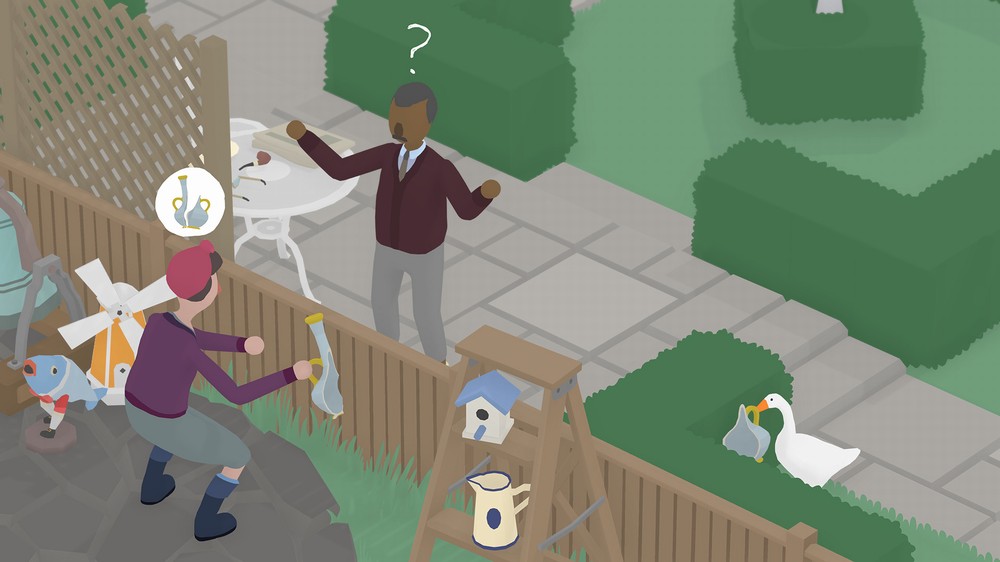 Completing Untitled Goose Game will take as long as it takes you to figure out what to do and actually do it. There are some complicated sequences in the latter part of the game that require a bit of planning and precise timing. One puzzle requires you to hide a goose statue and take its place, but if you don’t hide it well enough you’re busted. Humans are constantly finding items you have moved and returning them, often messing up your collection quests. Knowing what to do and actually getting it done are two different things, and you can probably expect at least 4-6 hours of thoughtful gameplay; less if you cheat and more if you are actually going to try to find the hidden quest list objectives. Seriously, you might stumble on one or two of these hidden quests, but you’ll have a much better time just looking up the list and then trying to figure out how to do them.

Untitled Goose Game is an original and totally delightful adventure with thoughtful puzzles and challenging activities that will entertain the entire family. It’s currently available on PC in the Epic Game Store and is coming to Steam later this year and is also available on all the consoles, so everyone can play it on something they own.   There were times when I was having as much fun plotting and playing this as any Hitman game, setting up these elaborate scenarios just to mess with people, and the sense of discovery is fantastic.  If that sounds like your kind of fun, or you just want to play a horrible goose that’s a menace to society then you’ll definitely want to play Untitled Goose Game. 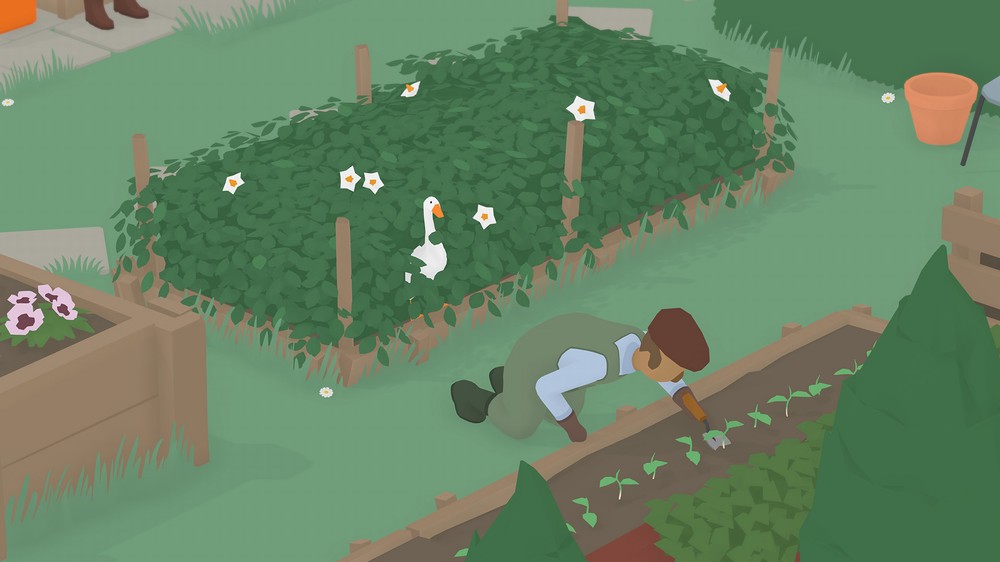 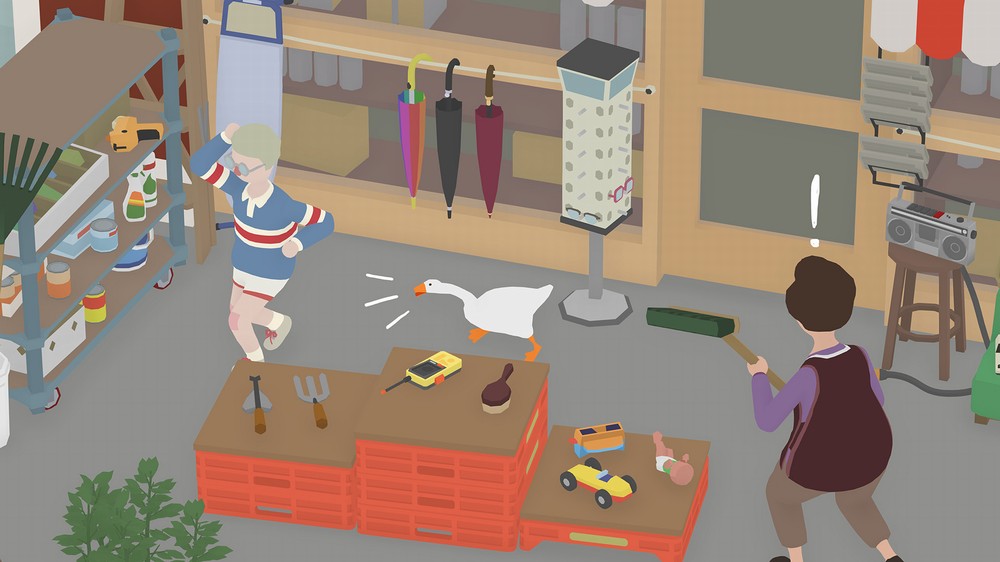