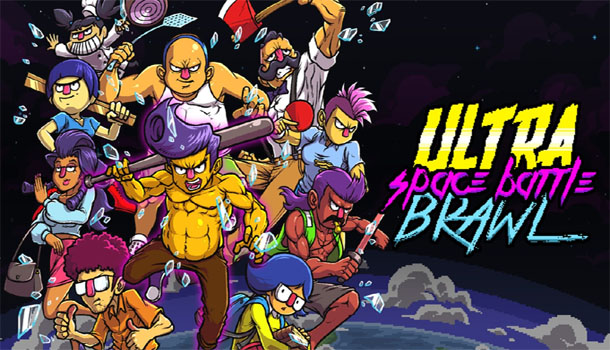 The ultimate in entertaining chaos.

I’ve played thousands of games over the past 40 years, and it never ceases to amaze me when some unsuspecting indie title catches my attention with some quirky game design or retro style production values. Ultra Space Battle Brawl is just such a game, calling back to the origins of gaming with its Breakout/Pong design, enhanced with its flashy mix of anime and Street Fighter graphics and a soundtrack that pays tribute to all those awesome Japanese-themed games I played on my TurboGrafx-16 in the early 90’s. The nostalgia level was high on presentation alone, but when you add in some genuinely fun and challenging gameplay including a story mode and some great multiplayer party modes; it’s hard to dismiss this quirky arcade game.

Solo gamers can enjoy a fun story mode where you can play as any of ten unique characters, each with their own stats, narrative, and sequential line-up of opponents that you will need to defeat in order to win. The plot is delivered through modest amounts of clickable text overlaid over heavily stylized character art while snappy music plays in the background. But the real fun starts when you make Ultra Space Battle Brawl the focus of your next party/game night. There are multiplayer modes for all variations of 2-4 players spanning 1, 3, or 5 round matches, and with games lasting only a minute or two everyone gets a chance to play, even when you have more players than controllers. 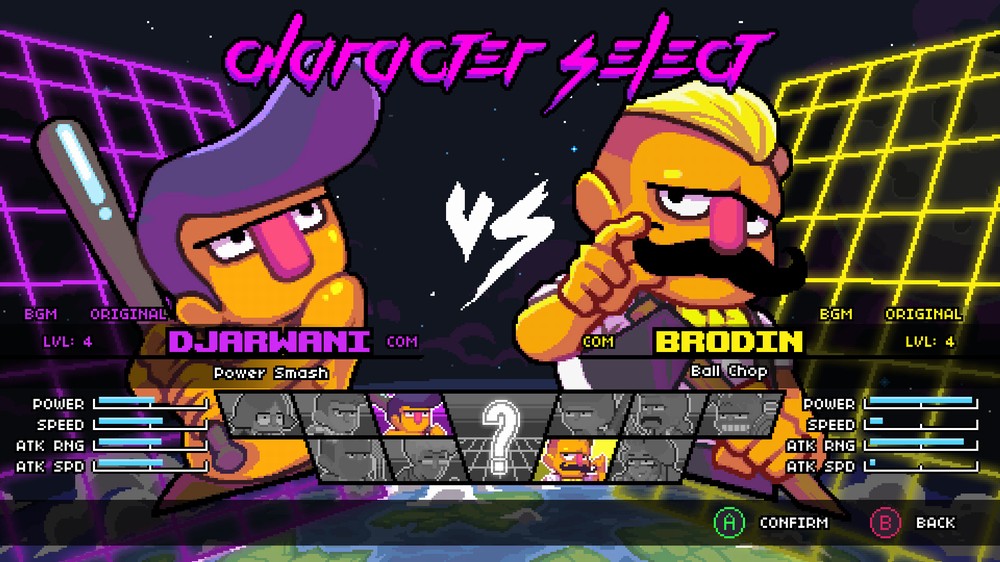 But just what exactly is Ultra Space Battle Brawl? Imagine a classic game of Breakout where you have destructible targets on each side of the screen, but instead of a paddle you move around one of the ten characters that swing a bat or some other item capable of knocking the glowing ball of energy back and forth. The ball changes color based on the last player to hit it and will only destroy targets of the opposing color until it is changed back, so you are in no danger of destroying your own targets. There are variations of the theme such as a primary target that needs to be destroyed but is being blocked by a destructible perimeter that you have to tunnel through.

What really makes the game crazy, and even a bit troublesome to play at times, is the rapid nature of the movement. Unlike a traditional Breakout paddle, characters can move all over the screen, and you have standard and power hits you can use to bat the ball at various speeds and angles, but the flashy neon graphics and stylized motion blur often make it unpredictable when it comes to hitting the ball.  You have to get the timing and the position just right otherwise you’ll whiff the swing as the ball continues toward your targets. 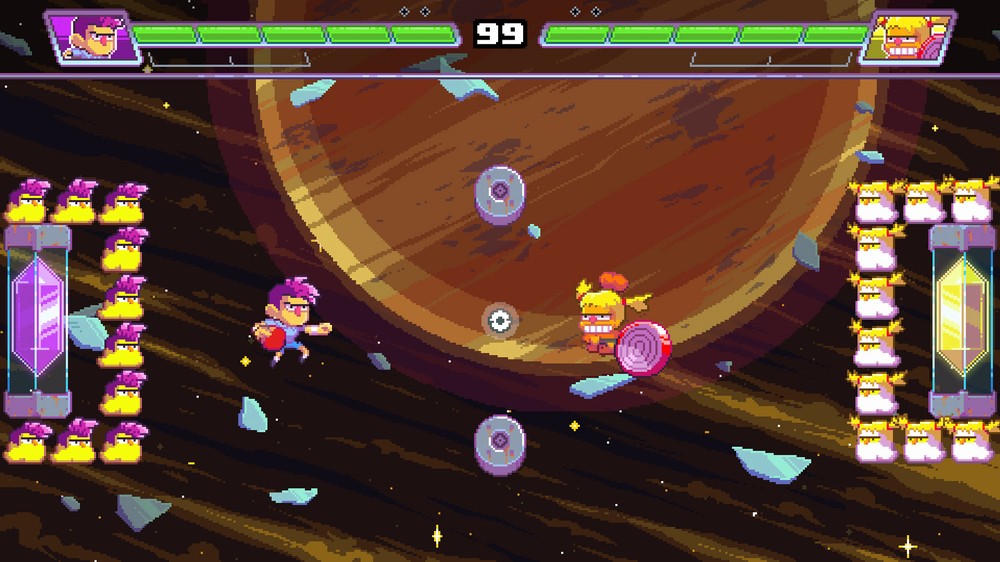 Characters also have their own unique set of four stats like power and speed, which can create a varied challenge yet still provide a very balanced experience. All off this combined with intense music and energetic visuals including violent screen shakes and intermittent anime-style cutscenes during special moments like invoking the Ultra power make this one of the most entertaining games of pure chaos I’ve played in a long time.

There’s not much more to say about Ultra Space Battle Brawl. It’s pretty basic in design and execution, and it is that same simplicity that gives the game is addictive charm.   Anyone can play and everyone will win…eventually. There is a bit of mastery in getting the timing down for returning the ball; even more so if you want to start playing the angles and deflecting off the wall around your opponents. And when your fingers go numb and you can’t play anymore you can just sit in the main menu and enjoy that epic theme music, which is nearly worth the price of admission alone. 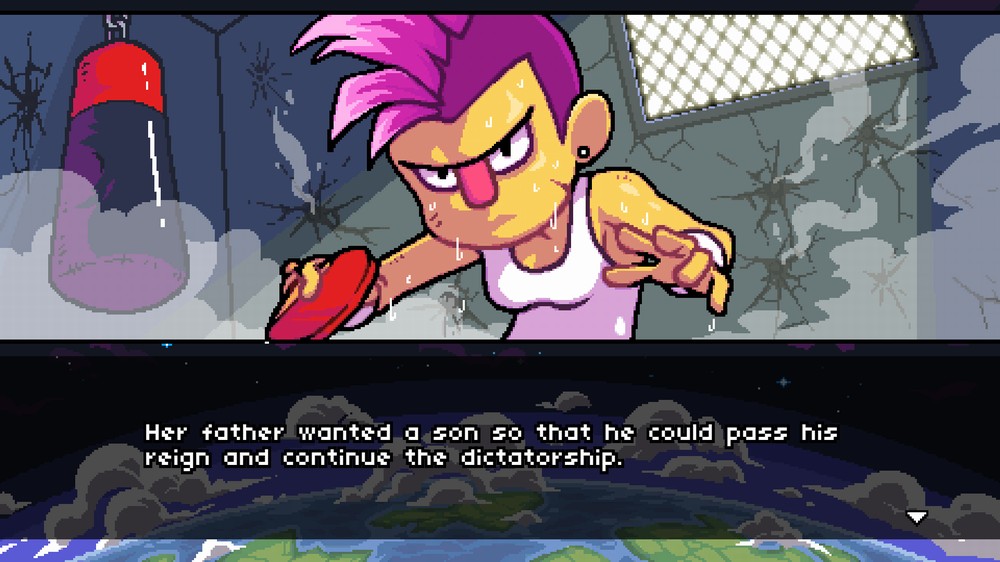 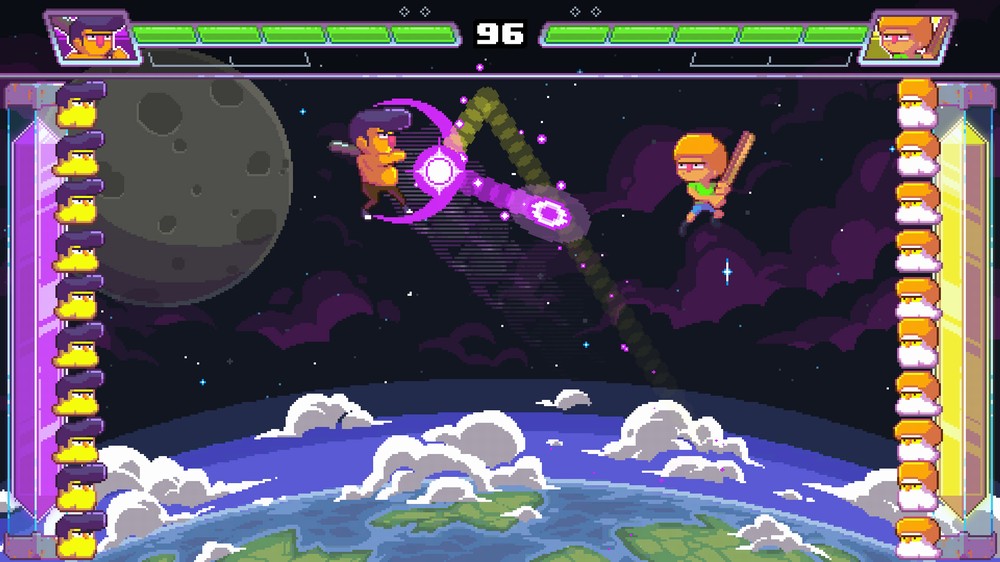 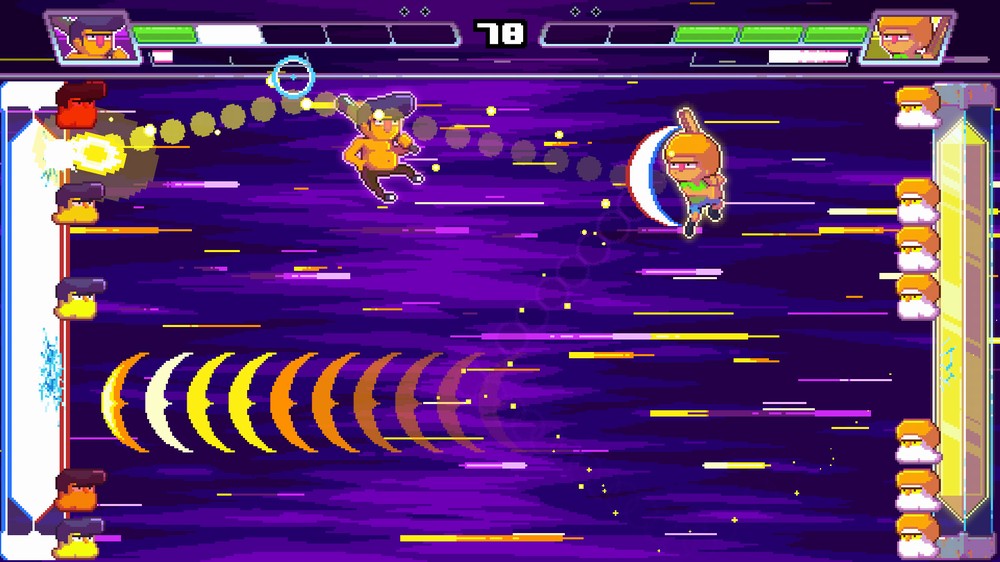 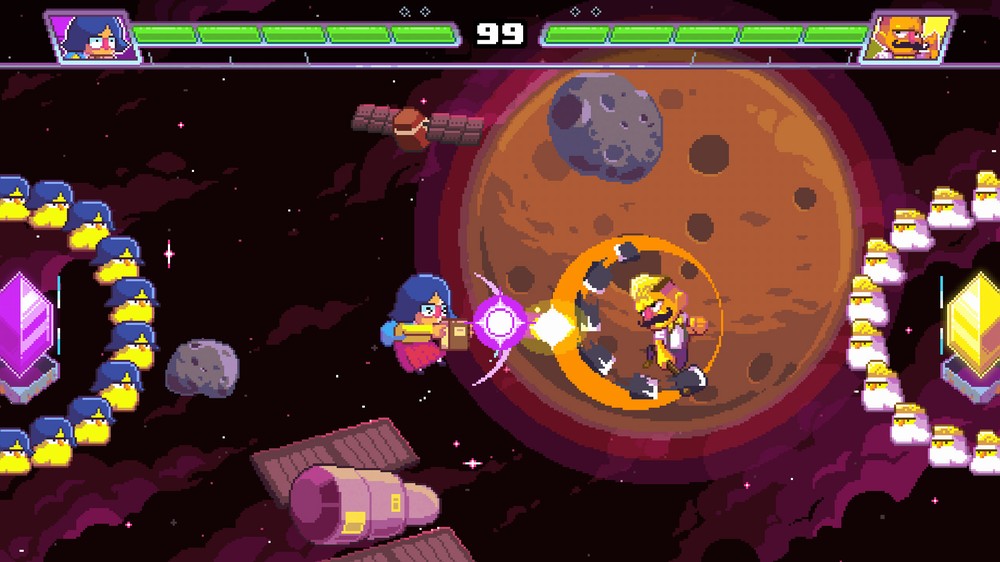 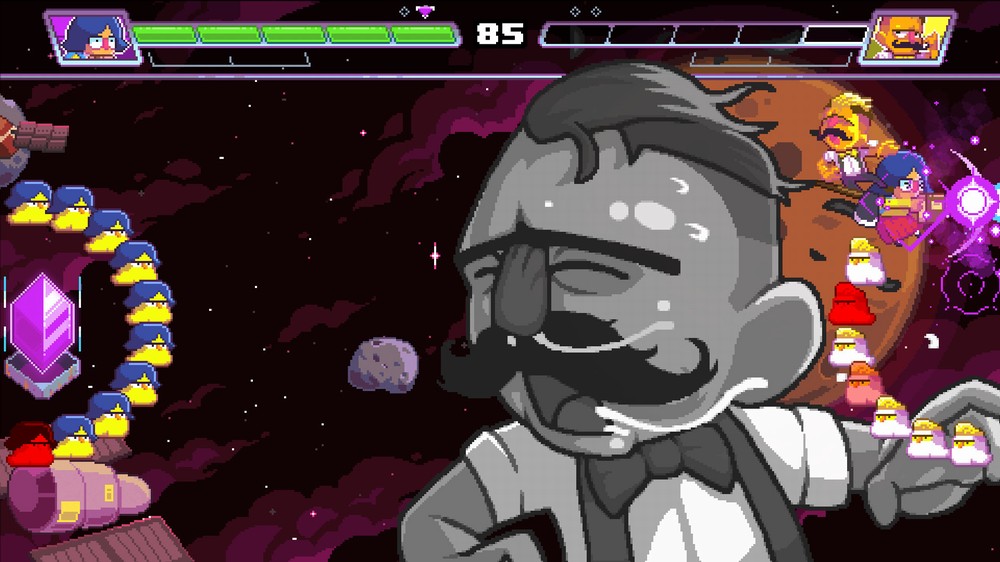 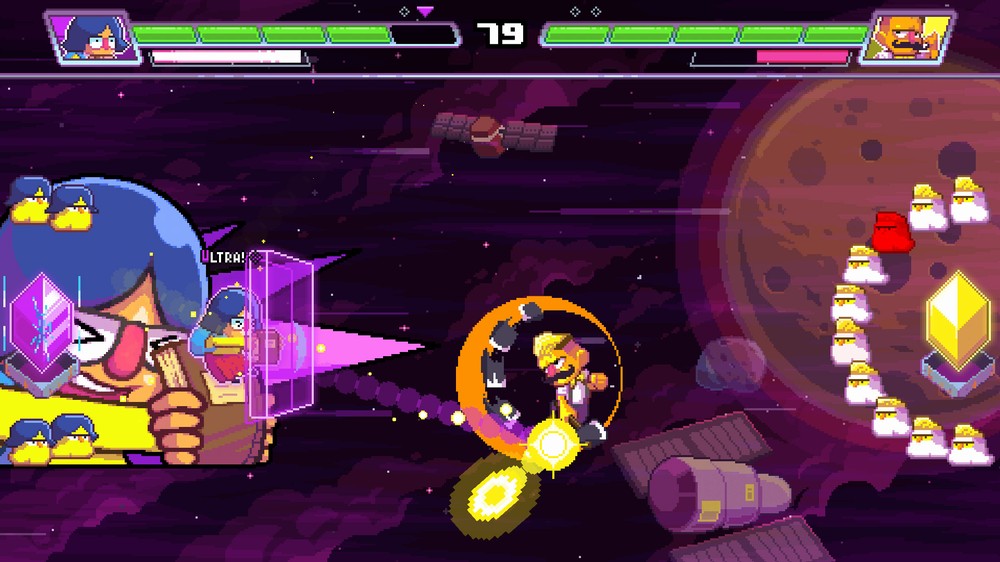 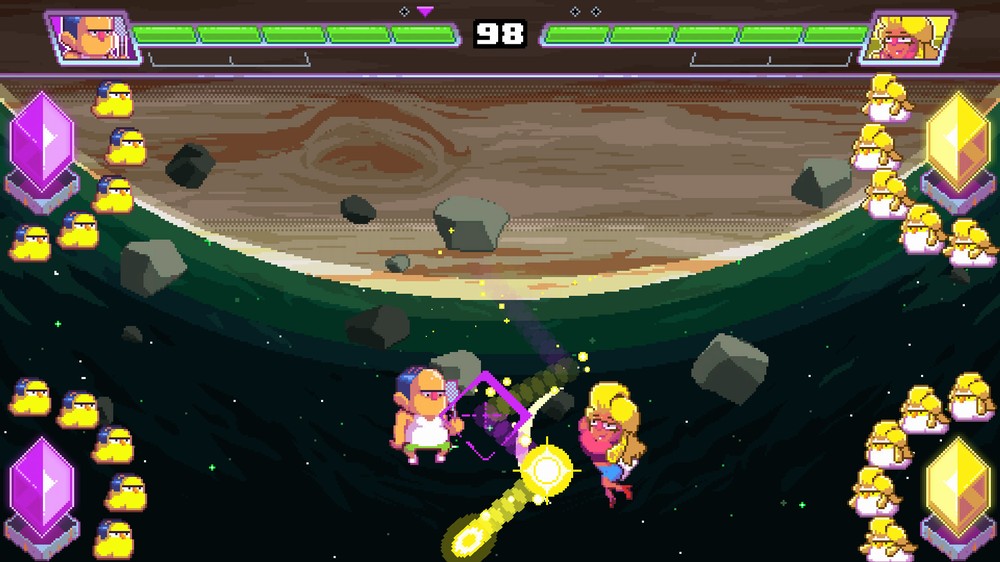